The median income of American households decreased by as much in the two years after the official end of the Great Recession as it did during the recession itself. 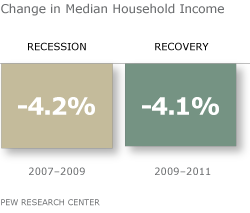 The current “recovery” is also the most negative for household income during any post-recession period in the past four decades. However, the failure of household incomes to regain ground two years into an economic recovery is not without precedent. U.S. households also experienced lingering losses during the recoveries from the 1990-91 and 2001 recessions—median household income fell by 1.3% in the first two years following the end of each of those two recessions. But those losses were less than half as great as the decrease of 4.1% in the first two years of the current economic recovery. Read More