The political conversation on Twitter is markedly different than that on blogs — and both are decidedly different than the political narrative presented by the mainstream press, according to a new study by the Pew Research Center’s Project for Excellence in Journalism that analyzed more than 20 million tweets, the online conversation and traditional news coverage about the campaign from May 2 through November 27.

The study finds that campaign discourse on Twitter tended to be more opinionated and often more negative about candidates than on blogs and in the news. The Twitter conversation about a candidate was also more likely to change from week to week than on blogs.

The study also updates the tone and amount of attention to each candidate in news coverage overall, in an elite sub-sample of national news outlets, and in the political blogosphere. The work is part of a new ongoing analysis of the race for president conducted by PEJ that will continue through the election, tracking the amount of attention paid to the candidates in different media platforms and the tone of that attention.

Read the full report for more details on these subjects:

See also our report on The Media Primary: How News Media and Blogs Have Eyed the Presidential Contenders during the First Phase of the 2012 Race 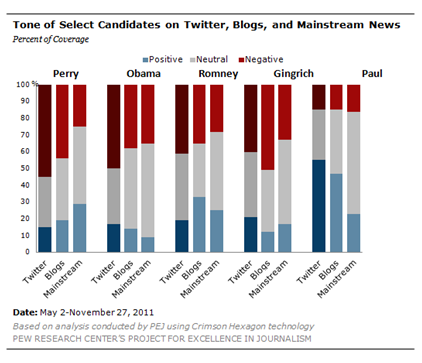 How Political Media Narratives Differ on Social and Traditional Media

Campaign 2012 and the Media