Public interest in the presidential campaign is about as high as it was four years ago, despite the fact that only one party currently has a competitive nomination contest. And while the focus this year has been on the GOP’s race, Democrats express about as much interest in 2012 candidates as do Republicans. 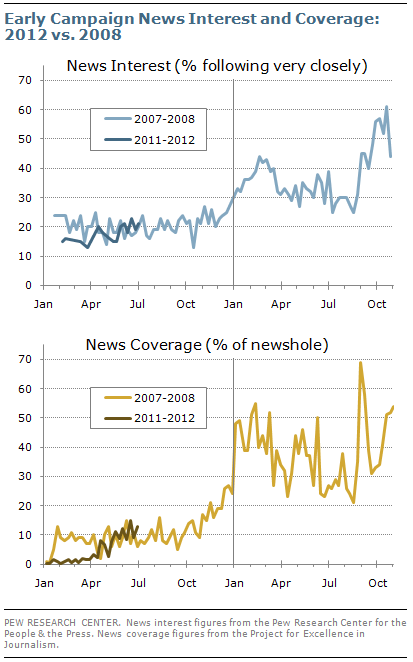 Overall, 21% of the public say they followed news about the potential presidential candidates very closely last week, according to the latest weekly News Interest Index survey conducted June 30- July 3 among 1,001 adults by the Pew Research Center for the People & the Press.

Interest has been at about this level for the past several months. At a comparable point in the presidential race four years ago, 20% said they were very closely following news about the candidates hoping to represent their parties in the 2008 election. As is the case today, the level of interest fluctuated only slightly week to week in 2007.

News coverage of the 2012 campaign, which has increased in recent weeks, also is about the same today as it was at this point in the previous campaign, according to data collected by the Pew Research Center’s Project for Excellence in Journalism (PEJ). Last week, coverage of the campaign accounted for 13% of the newshole; only the economy — combined with the debate over whether to raise the national debt limit — drew more coverage (a total of 19%). Michele Bachmann was the top campaign newsmaker last week, according to PEJ

Earlier this year, a series of major breaking stories — such as the Gabrielle Giffords’ shooting, the upheaval in the Middle East, the disasters in Japan and the killing of Osama bin Laden — dominated the news and the public’s interest. At this early stage in the campaign, relatively small numbers say they are following election news more closely than other major stories. For example, 9% say they followed news about the candidates most closely last week, while 22% say news about the condition of the U.S. economy was their top story and 13% cite the debate in Washington over the federal deficit and the national debt. 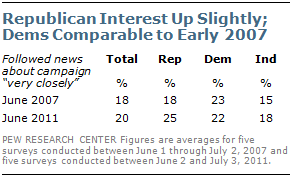 Over the past month, interest among Republicans in the presidential candidates has been higher than it was in June 2007: Since the beginning of June, an average of 25% of Republicans have been tracking news about the candidates very closely each week, compared with an average of 18% during the same period four years ago.

Many Say Campaign Getting Too Much Coverage 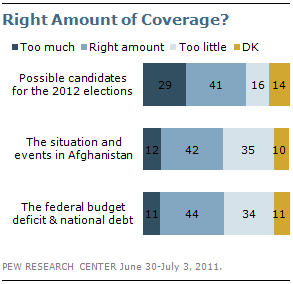 A plurality of Americans (41%) say news organizations are giving the right amount of coverage to possible candidates for the 2012 elections, while 29% say they are giving too much coverage to election news.

That is up slightly from 22% in April. Another 16% say the press is giving too little coverage to the candidates.

Pluralities also say news organizations are giving the right amount of coverage to the situation in Afghanistan (42%) and news about the federal budget deficit and national debt (44%). 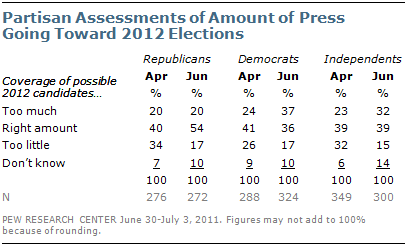 Republicans are more satisfied with the amount of campaign news coverage than they were in April. Currently, 54% of Republicans say possible presidential candidates are receiving the right amount of coverage, while just 17% say they are getting too little coverage. In April, 40% said the candidates were getting the right amount of coverage, while nearly as many (34%) said they were being under-covered. 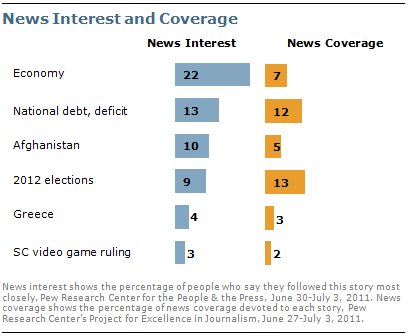 One-in-ten (10%) say news about the situation in Afghanistan was their top story; 22% say they followed news about Afghanistan very closely. This news accounted for 5% of coverage. 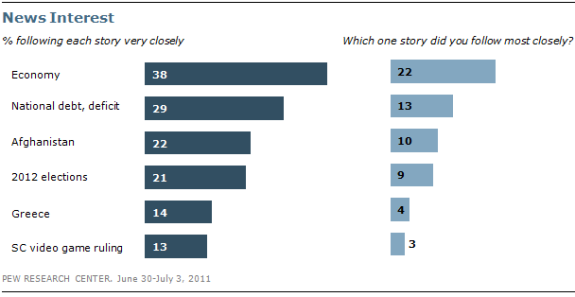 Smaller numbers cite the financial crisis and protests in Greece (4%) or the Supreme Court ruling that overturned a California ban on selling violent videogames to minors (3%) as their top story. Just 14% say they followed news about the Greek protests very closely, while 13% say they followed news about the court ruling this closely. Two weeks ago, the same number said they were following the court’s decision dismissing a class action lawsuit against Wal-Mart very closely. The protests in Greece made up 3% of coverage, while the Supreme Court ruling accounted for 2%.

These findings are based on the most recent installment of the weekly News Interest Index, an ongoing project of the Pew Research Center for the People & the Press. The index, building on the Center’s longstanding research into public attentiveness to major news stories, examines news interest as it relates to the news media’s coverage. The weekly survey is conducted in conjunction with The Project for Excellence in Journalism’s News Coverage Index, which monitors the news reported by major newspaper, television, radio and online news outlets on an ongoing basis. In the most recent week, data relating to news coverage were collected June 27-July 3, and survey data measuring public interest in the top news stories of the week were collected June 30-July 3 from a nationally representative sample of 1,001 adults.

Many Say Campaign Getting Too Much CoverageThe Week's News