Public views of the Patriot Act, whose renewal is being debated by Congress, have changed little since the Bush administration. Currently, 42% say the Patriot Act is a necessary tool that helps the government find terrorists, while somewhat fewer (34%) say the Patriot Act goes too far and poses a threat to civil liberties. 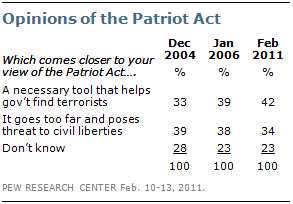 In 2006, the public divided evenly over the Patriot Act, with 39% saying it is a necessary tool and 38% saying it goes too far. In 2004, a slight plurality (39%) said it goes too far and threatens civil liberties.

The survey by the Pew Research Center for the People & the Press, conducted Feb. 10-13, 2011 among 1,000 adults, finds that while overall opinions about the Patriot Act have changed modestly since 2006, Democrats express more positive views of the law than they did five years ago. 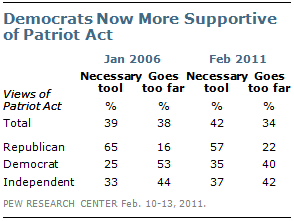 Over the same period, the proportion of Republicans who view the Patriot Act as a necessary tool that helps the government find terrorists has declined slightly, from 65% to 57%.