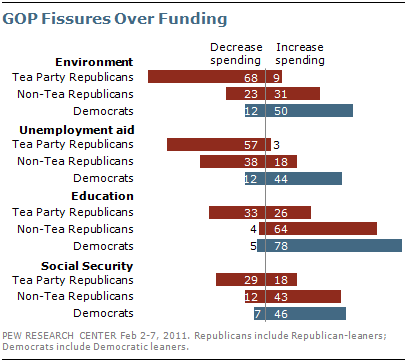 These intra-party divisions do not span all issues. For example, about half of both Tea Party and non-Tea Party Republicans favor increased spending for veterans’ benefits and services (as do about half of Democrats and Democratic-leaners).

Majorities of Republicans and Republican leaners, regardless of whether they agree with the Tea Party, favor reductions in foreign aid spending, though there is more support for this among Tea Party supporters (75% vs. 56% of non-Tea Party Republicans).

Among Democrats and Democratic leaners, as many support increasing (29%) as decreasing (28%) aid to the world’s needy.

Similarly, both Tea Party and non-Tea Party Republicans tend to favor decreasing federal assistance to the unemployed, though again, 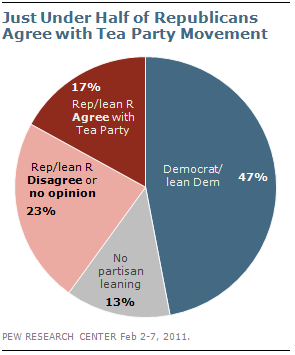 this is the majority view (57%) among Tea Partiers, compared with 38% of non-Tea Party Republicans.

Republican opinions of the Tea Party have been relatively stable over the course of the past year, though support may have slipped slightly since the election. In the Pew Research Center’s survey conducted the week after GOP victories in November, 51% of Republicans and Republican leaners said they agreed with the Tea Party. Today, this figure stands at 43%, while 57% either disagree or have no opinion.

For more on public opinon and the budget see, “Fewer Want Spending to Grow, But Most Cuts Remain Unpopular” at pewresearch.org/politics.

Republicans Are Losing Ground on the Deficit, But Obama’s Not Gaining