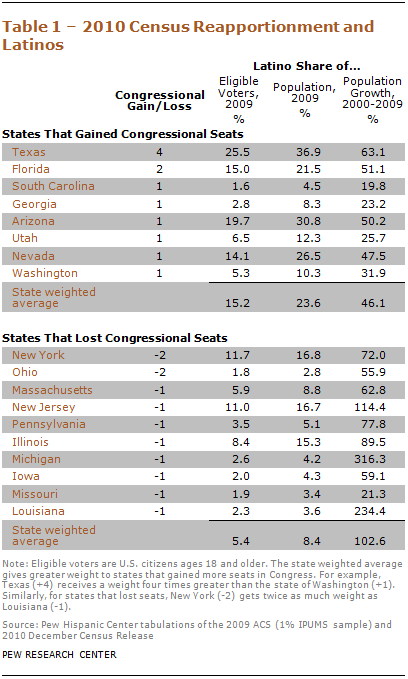 With these reapportionment changes, Latinos likely will play a larger role in national politics in the coming decade. Two states that gained seats, Florida and Nevada, have been key  battlegrounds in recent presidential elections (having voted for the Republican nominee in 2004 and the Democratic candidate in 2008). In both states, Latinos are a growing share of eligible voters.

According to the Census Bureau, there were 308 million people residing in the U.S. in 2010, up 9% from 2000. Overall, based on 2009 population estimates, Hispanics accounted for more than half (51%) of that growth.1 However, because many Latinos are either too young to vote or are not U.S. citizens, not all of their population growth translates into immediate electoral strength. Among the nation’s 48.4 million Hispanics in 2009, a record 20.1 million are eligible to vote. Yet an even greater number are not eligible to vote. Some 15.5 million Hispanics2 are U.S. citizens 17 years of age or younger, and 12.8 million of all ages are not U.S. citizens.3

Even so, the number of the Latinos eligible to vote continues to grow. Since 2000, nearly six million more Latinos have become eligible to vote. The bulk of this growth was attributable to the five million U.S.-born Latino youths nationwide who turned age 18 during this past decade. That translates into an additional half-million U.S.-born Latinos coming of age each year — a pattern that is certain to persist, and grow, in the coming decades. 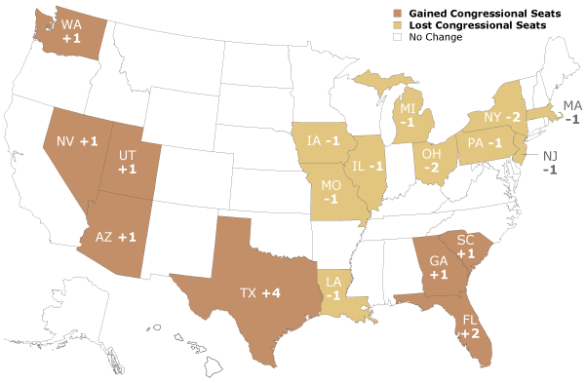 No matter what happens with immigration patterns in the future, the aging of the U.S.-born Latino youth bulge ensures that the electoral strength of the nation’s largest minority group will continue to grow in the coming decades. And much of that growth will take place in states that have gained congressional seats and Electoral College votes.

Based on results of the 2010 Census, eight states — Arizona, Florida, Georgia, Nevada, South Carolina, Texas, Utah and Washington — will gain congressional seats and Electoral College votes. Texas will gain four, Florida two, and all others one. Ten states will lose seats — Illinois, Iowa, Louisiana, Massachusetts, Michigan, Missouri, New Jersey, New York, Ohio and Pennsylvania. New York and Ohio will lose two and all others one.

[The apportionment of congressional seats is based upon total residents in each state including those who are ineligible to vote. See “Census 2010: Apportionment Basics.”] 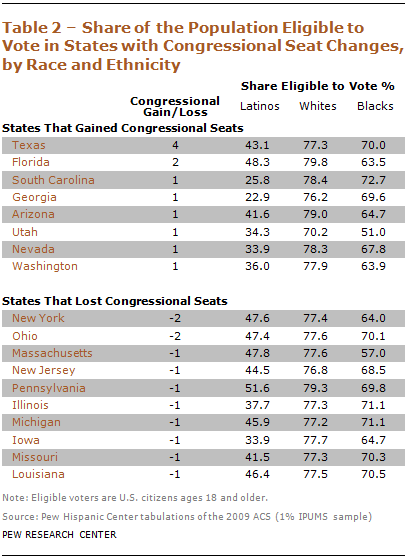 Latino voting strength is limited by the fact that one-third of all Latinos are under the age of 18 and by the fact that many Latino adults are not U.S. citizens. Because of these factors, the share of the Hispanic population that is eligible to vote is lower than it is among either whites or blacks, even though the Hispanic population has grown rapidly in recent decades.

In Georgia — a state where the vast majority of Hispanic adults are foreign born who arrived within the last decade or two — the gap is even wider. There, only 22.9% of the state’s Latinos are eligible to vote, compared with 76.2% of whites and 69.6% of blacks. Similar patterns are present in other “new settlement” states.

View the full report (PDF) for detailed tables with state-by-state data on population growth and congressiional reapportionment at pewresearch.org/hispanic.

1. Final 2010 Census population counts for the Hispanic population, and all other groups of Americans, will be released by the Census Bureau later this year.
2. Among Hispanics who are U.S. citizens and 17 years of age or younger, some 15.3 million were born in the U.S.
3. Sum may not total due to rounding.
4. The Census Bureau has not issued state population counts by race and ethnicity from the 2010 Census. However, the 2009 American Community Survey (ACS) provides the most recent state population estimates by race and ethnicity. Latino population estimates from the 2009 ACS are used throughout this report.