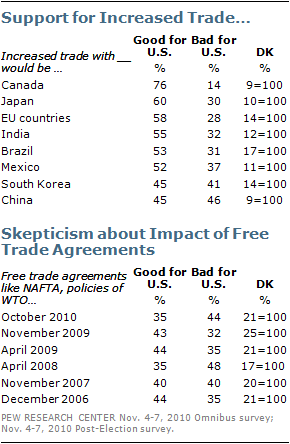 More generally, there is increased skepticism about the impact of trade agreements such as NAFTA and the policies of the World Trade Organization. Roughly a third (35%) say that free trade agreements have been good for the United States, while 44% say they have been bad for the U.S.

The latest national survey by the Pew Research Center for the People & the Press, conducted Nov. 4-7 among 1,255 adults, finds that just 28% of Republicans say that free trade agreements are good for the United States, down from 43% last November. 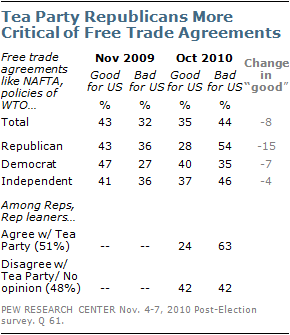 Opinions among Democrats and independents have changed little over the past year.

Republicans and Republican-leaning independents who agree with the Tea Party have a particularly negative view of the impact of free trade agreements. Only about a quarter of Republicans who agree with the Tea Party (24%) say that free trade agreements like NAFTA and the policies of the WTO have been a good thing for the United States, while 63% say they have been a bad thing. 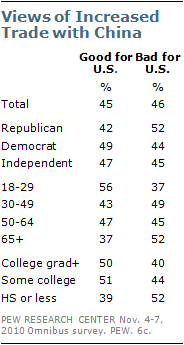 There are smaller partisan differences in opinions about increased trade with Canada, Japan, China or other countries. This question was included in a separate nationwide survey of 996 adults, which also was conducted Nov. 4-7.

Roughly half of college graduates (50%) and those with some college experience (51%) say increased trade with China would be good for the United States. That compares with 39% of those with no more than a high school education. 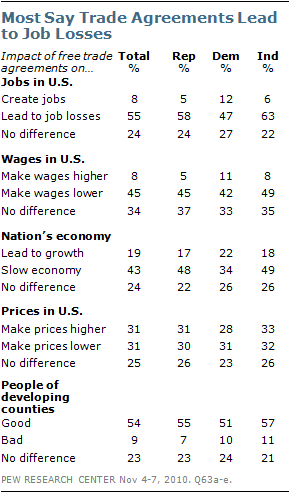 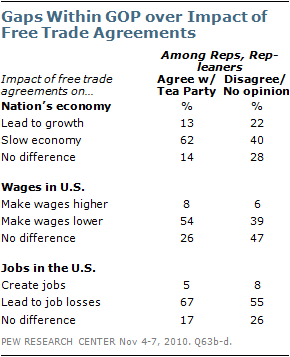 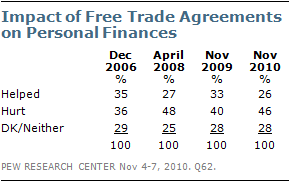 Nearly half (46%) of the public says they think free trade agreements have had a negative effect on their personal finances, 26% say they have helped, while 28% volunteer that they have neither hurt nor helped, they are not affected, or say they do not know.

These views have changed little since 2008, but in December 2006, somewhat more (35%) said that free trade agreements helped their personal finances. 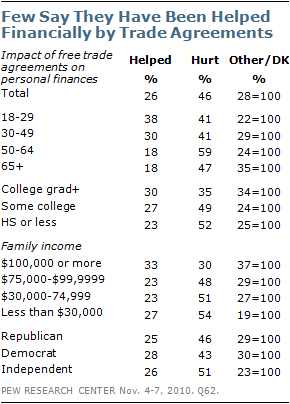 On this question, partisans and independents have similar views: 51% of independents, 46% of Republicans and 43% of Democrats say their personal financial situations have been hurt by free trade agreements.