Barack Obama may have toured his new home with President Bush, but much of last week’s media coverage focused on two women who ran losing campaigns for the executive branch. With Hillary Clinton, the speculation was whether she would become the top diplomat in the new Obama administration. With Sarah Palin, the question was whether she would emerge as the top Republican.

By the end of the week, Palin and Clinton were the second and third-leading newsmakers of the week from Nov. 10-16, trailing only the president-elect. 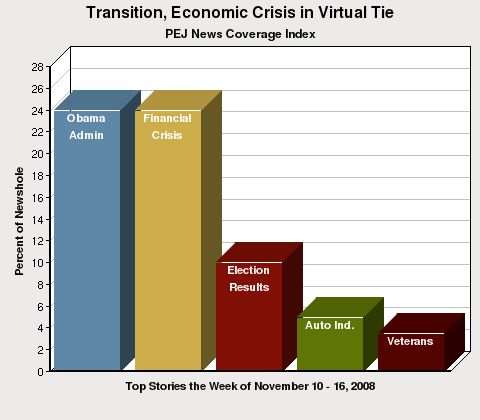 With the financial crisis certain to be topic No. 1 for President Obama, the country’s weakened economy rivaled the presidential transition as the top story of the week, with nothing else coming close. That was driven in part by a change in the Bush administration’s bailout strategy that seemed to suggest an even grimmer economic prognosis, and by Congress arguing over a controversial bailout for the failing auto industry.

These are among the findings of the first full post-election week of the News Coverage Index for Nov. 10-16, a weekly study of the media agenda from the Pew Research Center’s Project for Excellence in Journalism.

For the week, the media narrative of the incoming Obama administration was the No. 1 story, but only barely, filling 24% of the overall newshole studied. Most of the coverage of the new presidency (about two-thirds) was devoted to three major storylines — the logistics of the transfer of power from Bush to Obama, predictions about the tone and substance of an Obama presidency and speculation about who might populate the top jobs in that administration.

By the end of the week, much of this last storyline was dominated by word that Hillary Clinton — Obama’s erstwhile rival — was a serious candidate for secretary of state. The story in the Nov. 15 Washington Post viewed the news as part of an Obama strategy “to reach out to former rivals and consider unexpected moves as he assembles his cabinet.” When Obama mentioned he was reading about Abraham Lincoln during his “60 Minutes” interview on Nov. 16, correspondent Steve Kroft said the 16th president “put a lot of his political enemies in his cabinet.” Obama responded coyly, that he found Lincoln to be “a very wise man.”

Yet by the end of the weekend, speculation mounted in media accounts that Bill Clinton’s complex financial dealings could pose a potential threat to his wife’s bid to become secretary of state.

The Clinton buzz was part of a larger effort by the pundits last week to predict how the incoming president, a liberal who preached moderation, would govern. When asked about that on the Nov. 10 edition of MSNBC’s Hardball, Democratic strategist Steve McMahon seemed to be counseling Obama to mix daring with centrism. He advocated “a bold economic move,” while warning that “the middle decided this election and … the swing voters are waiting for him to address their concerns.”

The big story on the logistics front was Obama’s Nov. 10 visit to the White House. Given his historic status as the first black man to take up residence in the White House and his relentless attacks on Bush during the campaign, the meeting offered more than mere ceremony — and generated considerable attention. “Bushes show Obamas inside” read the headline on a Nov. 11 Arkansas Democrat Gazette story, illustrated by a photo of the two men chatting in the Oval Office.

Another 10% of last week’s newshole was devoted to a continued discussion of the results of the Nov. 4 election. Roughly three-quarters of that coverage was consumed by two themes — a postmortem on the voters’ verdict and a debate on how the Republican Party should resurrect itself. In both narratives, Sarah Palin played a prominent role, largely by making herself far more available to the media than she had been during the campaign. Indeed, the week may well be remembered by the intensity of Palin’s interviews — with CNN, NBC, Fox News and her appearance at the Republican governors’ conference in Florida.

In an interview with Fox News, Palin talked about praying, asking God, “don’t let me miss the open door” that might present future opportunities. On NBC, she characterized the political process she had just been through as “pretty brutal.”

On the Nov. 11 edition of CNN’s Situation Room, correspondent Brian Todd called it “a media blitz” with Palin holding forth “on why Republicans lost.” But the future, rather than the past, was on Palin’s mind when she took a lead role at the Republican Governors Association meeting in Florida. (There was a pretty surreal moment there when a Palin press conference ended abruptly after four questions.)

A Nov. 13 New York Times account of the governors’ event reported that Palin told her fellow governors, a group that may include some 2012 rivals, to “let us resolve not to be the negative party. Let us build our case with actions, not just with words.”

Although John McCain broke his post-election silence in a jokey interview with Jay Leno last week, Palin significantly overshadowed him. She was a lead newsmaker in more than 3% of last week’s stories examined by PEJ, meaning she appeared in at least 50% of the content of those stories. Clinton was very close behind, but McCain lagged well back, showing up as a lead newsmaker in 1% of last week’s coverage. By week’s end, even some friendly commentators were counseling Palin to adopt a lower profile. 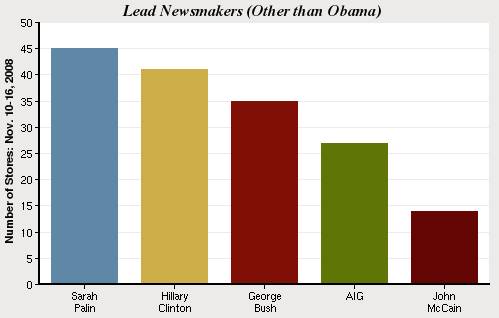 The Nov. 13 edition of USA Today had some ominous news on the financial front. Under the headline, “Treasury rethinks Wall St. bailout,” the paper reported on the decision to “scrap plans to buy troubled assets and focus on directly injecting money into the banking system.”

“Treasury Secretary Henry Paulson said the government’s shifting plans reflect an economy that is in far worst shape that it was just a few weeks ago,” the story added.

In filling 24% of the newshole the week of Nov. 10-16, the economic crisis tripled from the previous week’s coverage and generated its highest level of media attention since early October. Much of that news was bad. About half of the coverage related to three narratives — the impact on the global economy (driven by the international summit in Washington), the housing and financial crisis and the details of the federal bailout plan.

There was also a litany of stories of troubled companies and industries. Among events that made headlines was the news that Circuit City was going bankrupt, that American Express might be seeking a $3.5 billion federal rescue and that AIG’s bailout had been revamped.

The big insurer got coverage for another reason— also unwelcome. On the Nov. 12 broadcast of ABC’s Good Morning America, investigative correspondent Brian Ross, crediting an ABC affiliate station in Phoenix, showed hidden camera footage of AIG executives “hosting a lavish sales meeting” for financial planners at a swanky resort. “Hotel staff was told to keep AIG’s involvement secret,” Ross noted, and public reaction was largely one of outrage. The story featured Ross reading angry viewer emails like this one with a porcine theme: “These guys are overpaid, overfed pigs at the trough.”

The troubled U.S. automotive industry, a narrative fueled largely by the debate over whether to bail out car makers, was another major part of the story last week. It alone filled 5% of the newshole studied. While many Democrats, including Obama, have voiced support for some kind of package, the coverage made clear that opposition was building across the aisle. A fair amount of the business coverage and commentaries of the week focused on the pros and cons of bailing out the long-struggling automakers, whose problems are perceived to be more of their own making and far more structural than the financial markets.

“The prospect of a government rescue for the foundering American automakers dwindled [yesterday] as Democratic Congressional leaders conceded that they would face potentially insurmountable Republican opposition during a lame-duck session next week,” the Nov. 14 New York Times reported.

In the continuing coverage of the meltdown that began in mid-September, Detroit became the new front line last week.

Four topics that were in some ways interrelated — the new administration (24% of the newshole), the financial crisis (24%), the presidential election results (10%) and the U.S. auto industry (5%) — were the top stories in PEJ’s News Coverage Index for Nov. 10-16.

The No. 5 story, at 3% of the newshole, was events related to the Veterans Day commemoration. Next came the raging wildfires fires in southern California that accounted for another 3%. But that is just a fraction of the coverage (38% of the newshole) generated by the destructive California fires about this time a year ago, during the week of Oct. 21-26, 2007. The situation inside Iraq, including a flare-up of violence in Baghdad, was No. 7 at 2% of the newshole.

The rest of last week’s top-10 story list includes Congressional elections (2%), with much of the focus on the three still unresolved senate races in Minnesota, Georgia, and Alaska. The issue of same-sex marriage, which was legalized in Connecticut last week, was No. 9 at 2% of the newshole. And health news, primarily findings that anti-cholesterol drugs can lower heart attack risks even in people with normal cholesterol levels, was No. 10 at 1%.

PEJ’s weekly News Coverage Index examines the news agenda of 48 different outlets from five sectors of the media: print, online, network TV, cable and radio. (See List of Outlets.) The weekly study, which includes some 1,300 stories, is designed to provide news consumers, journalists and researchers with hard data about what stories and topics the media are covering, the trajectories of that media narrative and differences among news platforms. The percentages are based on “newshole,” or the space devoted to each subject in print and online and time on radio and TV. (See Our Methodology.) In addition, these reports also include a rundown of the week’s leading newsmakers, a designation given to people or institutions who account for at least 50% of a given story.