An early look at the 2020 electorate

By Anthony Cilluffo and Richard Fry

The 2020 U.S. presidential election is rapidly coming into view – and so is the electorate that will determine its outcome.

While demographic changes unfold slowly, it’s already clear that the 2020 electorate will be unique in several ways. Nonwhites will account for a third of eligible voters – their largest share ever – driven by long-term increases among certain groups, especially Hispanics. At the same time, one-in-ten eligible voters will be members of Generation Z,  the Americans who will be between the ages 18 and 23 next year. That will occur as Millennials and all other older generations account for a smaller share of eligible voters than they did in 2016.

Pew Research Center defines the electorate as all citizens ages 18 and older living in the United States. We don’t account for those who have lost their voting rights, such as people convicted of felonies living in certain states, or those who can vote from outside the U.S., such as citizens living abroad and members of the armed forces stationed in other countries.

What might these demographic shifts mean politically? In 2016, nonwhite voters were more likely to back Democrat Hillary Clinton, while white voters were more likely to back Republican Donald Trump. Younger generations, meanwhile, differ notably from older generations in their views on key social and political issues. It remains unclear how these patterns might factor into the 2020 election and, as always, a great deal will depend on who turns out to vote. 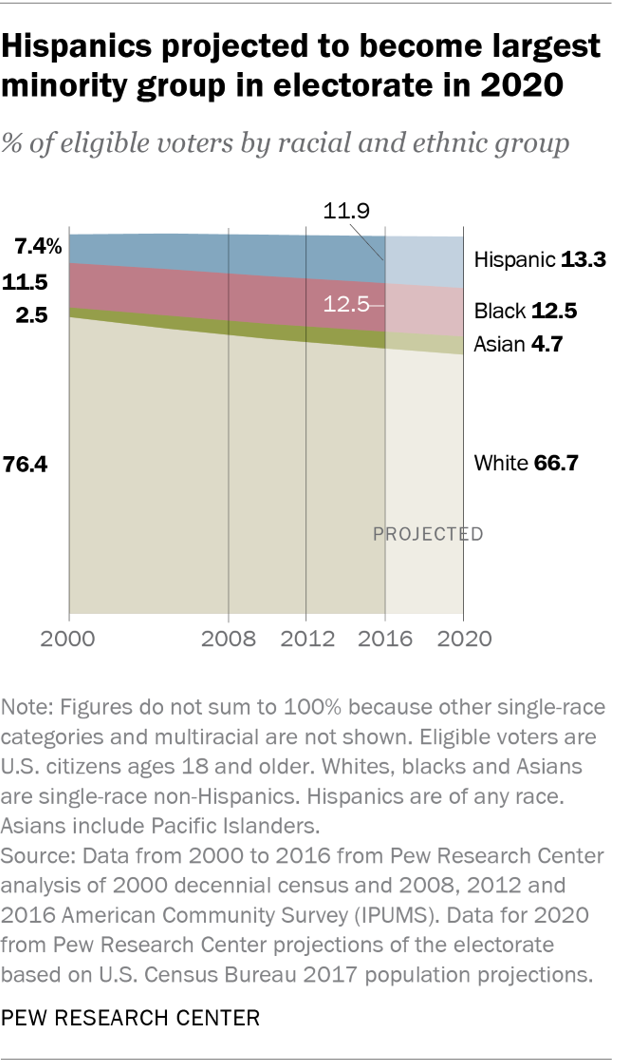 We project that the 2020 election will mark the first time that Hispanics will be the largest racial or ethnic minority group in the electorate, accounting for just over 13% of eligible voters – slightly more than blacks. This change reflects the gradual but continuous growth in the Hispanic share of eligible voters, up from 9% in the 2008 presidential election and 7% in the 2000 election. The black eligible voter population has grown about as fast as the electorate overall, meaning their share has held constant at about 12% since 2000.

Taken together, this strong growth among minority populations means that a third of eligible voters will be nonwhite in 2020, up from about a quarter in 2000. This increase is at least partially linked to immigration and naturalization patterns: One-in-ten eligible voters in the 2020 election will have been born outside the U.S., the highest share since at least 1970.

Voter turnout will play an important role in determining the relative electoral influence of different racial and ethnic groups. For example, while Hispanics will outnumber blacks among eligible voters next year, they may not actually cast more ballots than blacks due to different turnout patterns. In recent presidential elections, blacks were substantially more likely than Hispanics to vote. Indeed, the number of Hispanic eligible voters who didn’t vote has exceeded the number of those who did vote in every presidential election since 1996.

Still, the changing racial and ethnic composition of the electorate likely has political implications in part because nonwhites have long been significantly more likely than whites to back Democratic candidates. For instance, in the 2016 election, white voters favored Donald Trump by a 15 percentage point margin, while large majorities of blacks and Hispanics voted for Hillary Clinton.

Another important long-term trend is the overall aging of the electorate. In 2020, nearly a quarter of the electorate (23%) will be ages 65 and older, the highest such share since at least 1970. This reflects not only the maturation of the large Baby Boom generation but also increased life expectancy among older Americans.

Baby Boomers and older generations, who will be ages 56 and older next year, are expected to account for fewer than four-in-ten eligible voters in 2020. This is a significant change from 2000, when nearly seven-in-ten eligible voters (68%) were Boomers, Silents or members of the Greatest Generation (collectively, those ages 36 and older at the time). Even as recently as 2012, when the youngest Boomer was 48 years old, Boomer and older generations were about half of the electorate (49%).

Meanwhile, the leading edge of Generation Z (people ages 18 to 23 in 2020) is projected to comprise one-in-ten eligible voters, up from just 4% in 2016, when the vast majority were too young to cast ballots. These post-Millennials are on track to be more racially and ethnically diverse than their predecessors: In 2020, Gen Z eligible voters are expected to be 55% white and 45% nonwhite, including 21% Hispanic, 14% black, and 4% Asian or Pacific Islander. By comparison, the Boomer and older electorate is projected to be about three-quarters white (74%).

Differences in turnout rates again matter when talking about generations and should be kept in mind as election season gets underway. Since older adults are more likely to turn out to vote, it’s possible that older generations will form a larger share of actual voters in 2020 than their share in the electorate. That’s what happened in 2016: Even though Boomers and older generations accounted for 43% of eligible voters, they cast 49% of the ballots.

View full details on our data and methodology.