Today, more than four-in-ten American adults have at least one step relative in their family – either a stepparent, a step or half sibling or a stepchild, according to a nationwide Pew Research Center survey. People with step relatives are just as likely as others to say that family is the most important element of their life. However, they typically feel a stronger sense of obligation to their biological family members (be it a parent, a child or a sibling) than to their step relatives, the survey finds. 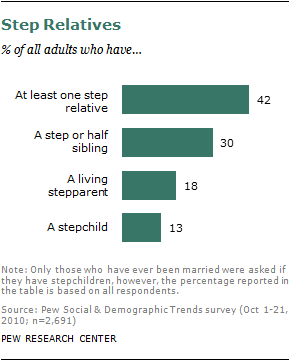 Several sweeping changes in the demography of American family life in the past half century – including increases in divorce and in the share of babies born out of wedlock – have contributed to the prevalence of step relatives.

However, different doesn’t necessarily mean worse. Seven-in-ten adults who have at least one step relative say they are very satisfied with their family life. Those who don’t have any step relatives register slightly higher levels of family satisfaction (78% very satisfied).

Stepfamilies can be found among young and old, black and white, and rich and poor. However, there is a distinct demographic pattern in the incidence of stepfamilies among American adults. Young people, blacks, and those without a college degree are significantly more likely to have step relatives. Among those under age 30, more than half (52%) report that they have at least one step relative. This compares with 40% of those ages 30 and older (including only 34% of those ages 65 and older).

This is not surprising given that young adults are much more likely than their older counterparts to have grown up with parents who were not married. In the Pew Research survey, 36% of those under age 30 said during the time they were growing up their parents were either divorced, separated or were never married. This compares with 21% of those ages 30-49 and only 10% of those ages 50 and older.

A higher share of blacks than whites or Hispanics have step family members. Among black adults interviewed in the Pew Research survey, 60% have at least one step relative. This compares with 46% of Hispanics and 39% of whites. The biggest gap between blacks and whites is in the proportion of each that has step or half siblings. Some 45% of black adults report having at least one step or half sibling, compared with 26% of whites. Roughly the same proportion of blacks and whites have a living stepparent. And blacks are somewhat more likely than whites to have stepchild.

Previous Pew Research Center analysis revealed a steady decline over the past 50 years in the share of American adults who are married.2 According to that analysis, the falloff in marriage rates has been more dramatic among certain demographic groups – and those are the same groups that are more likely to be living in stepfamilies today.

For example, blacks are much less likely to be married today than they were 50 years ago. In 1960, 61% of blacks ages 18 and older were married; by 2008 only 32% were married. Marriage rates have also declined among whites and Hispanics over the same time period though not as sharply. In addition, a large marriage gap has emerged between college graduates and those without a college degree. Today, marriage remains the norm for college graduates, while fewer than half of those who did not graduate from college are currently married.

Most adults who have step relatives feel a stronger sense of obligation to their biological family members than they do to their step kin.3 The Pew Research survey asked respondents how obligated they would feel to provide assistance to family members who were dealing with a serious problem and needed either financial help or caregiving. Survey respondents were asked about a list of family members including parents, siblings, children, stepparents, step or half siblings and stepchildren. They were also asked how obligated they would feel to help out their best friend. 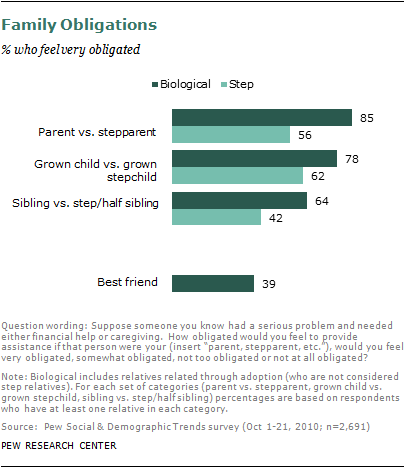 Parents feel almost as obligated to their grown children as adult children feel to their aging parents. Overall, 77% of parents with at least one grown child say they would feel very obligated to help that child if need be.

However, even though step relatives trail biological relatives in each of these measures, they do slightly better overall than “best friend.” No matter what their family constellation, all survey respondents were asked how obligated they would feel to assist their best friend if he or she was faced with a serious problem. Just 39% of adults say they would feel very obligated.