This report is drawn from a survey conducted as part of the American Trends Panel (ATP), a nationally representative panel of randomly selected U.S. adults living in households, created by Pew Research Center. Respondents who self-identify as internet users and who provided an email address participate in the panel via monthly self-administered web surveys, and those who do not use the internet or decline to provide an email address participate via the mail. The panel is being managed by Abt SRBI.

Data in this report are from the May wave of the panel, conducted May 10-June 6, 2016. Most findings in this report were conducted among 1,534 respondents (1,385 by web and 149 by mail) who were randomly assigned to complete one of three forms or sets of questions on the survey. The margin of sampling error for the sample of 1,534 respondents is plus or minus 4.0 percentage points.

Members of the American Trends Panel were recruited from two large, national landline and cellphone random-digit-dial (RDD) surveys conducted in English and Spanish. At the end of each survey, respondents were invited to join the panel. The first group of panelists was recruited from the 2014 Political Polarization and Typology Survey, conducted Jan. 23 to March 16, 2014. Of the 10,013 adults interviewed, 9,809 were invited to take part in the panel and a total of 5,338 agreed to participate.18 The second group of panelists was recruited from the 2015 Survey on Government, conducted Aug. 27 to Oct. 4, 2015. Of the 6,004 adults interviewed, all were invited to join the panel, and 2,976 agreed to participate.19 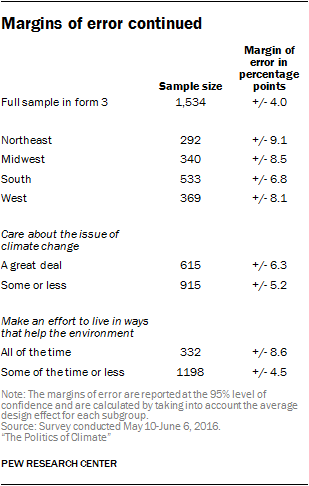 The ATP data were weighted in a multistep process that begins with a base weight incorporating the respondents’ original survey selection probability and the fact that in 2014 some panelists were subsampled for invitation to the panel. Next, an adjustment was made for the fact that the propensity to join the panel and remain an active panelist varied across different groups in the sample. The final step in the weighting uses an iterative technique that matches gender, age, education, race, Hispanic origin and region to parameters from the U.S. Census Bureau’s 2014 American Community Survey. Population density is weighted to match the 2010 U.S. Decennial Census. Telephone service is weighted to estimates of telephone coverage for 2016 that were projected from the July-December 2015 National Health Interview Survey. Volunteerism is weighted to match the 2013 Current Population Survey Volunteer Supplement. It also adjusts for party affiliation using an average of the three most recent Pew Research Center general public telephone surveys. Internet access is adjusted using a measure from the 2015 Survey on Government. Frequency of internet use is weighted to an estimate of daily internet use projected to 2016 from the 2013 Current Population Survey Computer and Internet Use Supplement. Sampling errors and statistical tests of significance take into account the effect of weighting. Interviews are conducted in both English and Spanish, but the Hispanic sample in the American Trends Panel is predominantly native born and English speaking. 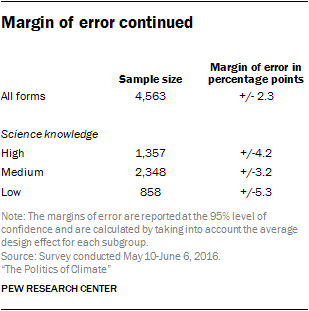 The Pew Research Center survey included a set of nine questions to tap public knowledge of science across a range of principles and topics. The set of questions is evaluated here for the degree to which responses are internally consistent, reflect a single underlying factor or dimension, and differentiate people with higher and lower knowledge scores. 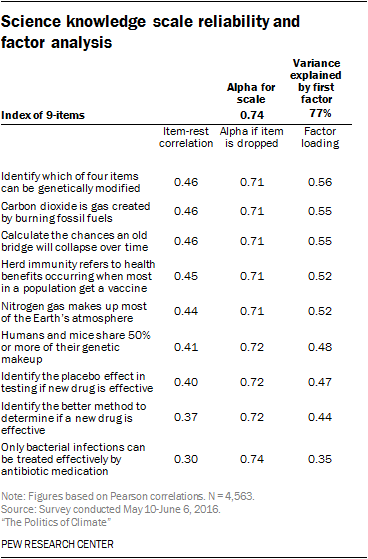 As shown in the accompanying table, the internal reliability or consistency of the scale as measured by Cronbach’s alpha is 0.74. Each of the items in the scale is at least moderately correlated the other items.

An exploratory factor analysis finds one common factor explaining 77% of the shared variance in the items. The factor loadings show that each of the nine questions is moderately correlated with this single common factor. These indicators suggest that the set of items is measuring a single underlying dimension.

We also ran an item-response theory analysis (IRT) to check how well each question distinguishes between those who know relatively more or less on the scale. This analysis fits a two-parameter logistic model, allowing discrimination and difficulty to vary across items. Discrimination shows the ability of the question to distinguish between those with higher and lower science knowledge. Difficulty shows how easy or hard each question is for the average respondent. We did not include a guessing parameter in the model because the questionnaire offered respondents an explicit option of not sure on the survey. 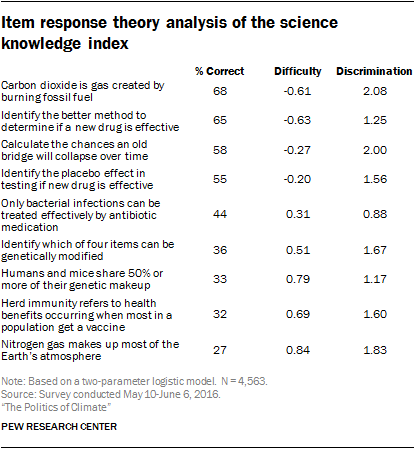 As desired, the results show variation in both difficulty and discrimination across the nine questions. The questions with the strongest ability to discriminate between those who hold more or less science knowledge are 1) the question about which gas is made as a consequence of burning fossil fuels and 2) the question asking respondents to calculate the conditional probability of an old bridge collapsing over time. The question with the weakest ability to discriminate between those with higher and lower science knowledge is that on the effectiveness of antibiotics to treat bacterial, but not other kinds of infections.

Next: Appendix A: Detailed tables
← Prev Page
Page1Page2Page3Page4Page5Page6Page7You are reading page8Page9
Next Page →

The Politics of Climate 1. Public views on climate change and climate scientists 2. Public opinion on renewables and other energy sources 3. Everyday environmentalism 4. Public knowledge about science has a limited tie to people’s beliefs about climate change and climate scientists About this report Acknowledgments
Methodology
Appendix A: Detailed tables