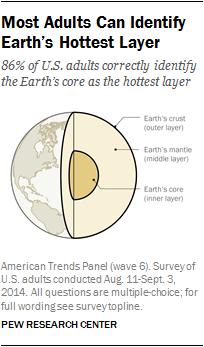 Among the science questions in the new Pew Research Center survey that were easiest for most to answer correctly: 86% identify the Earth’s inner layer, called the core, as its hottest part.9 A nearly equal share, 82%, knows that uranium is needed to make nuclear energy and nuclear weapons.

In addition, 78% of Americans correctly identify a comet when looking at a photograph described as having an icy core with a tail of gas and dust that extends millions of miles. And 72% of Americans know that radio waves, not sound waves, are used to make and receive cellphone calls. The same share of the public (72%) also knows that a light-year measures distance, not time. Elaboration on our question language: In designing the question about cellphones, we tried to use language that would be commonly understood among the non-expert public. Several readers and quiz-takers wrote to suggest that one of the response options we offered would be better expressed as “visible light waves” rather than the way we listed it, “light waves.” They noted that radio waves are also on the electromagnetic spectrum that includes both radio waves and light waves. Our question used the phrase to “send and receive cellphone calls” to try to convey to those being asked the question that we were referring to the waves needed to transmit calls between cellphone towers, not just the sound involved in talking with someone by telephone. Just 3% selected “light waves” in our national survey and some 72% of the general public responded that radio waves are needed to make and receive cellphone calls, an explanation that is consistent with explainers for the general public by the Institute for Physics. 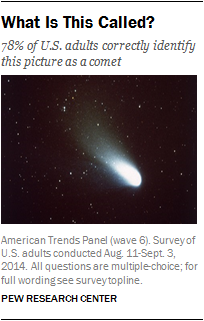 Americans fare well as a whole when it comes to one aspect of science history: Fully 74% of Americans correctly identify Jonas Salk as the person who developed the polio vaccine from among a list of other scientists that included Marie Curie, Albert Einstein and Isaac Newton.

Most Americans can distinguish between astronomy and astrology. Seventy-three percent of adults recognize the definition of astrology as the study of how the position of the stars and planets can influence human behavior. By comparison, 22% of adults incorrectly associate this definition with astronomy, while another 5% give some other incorrect response.

Some 63% Americans correctly say that the findings 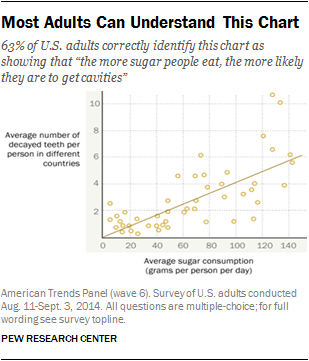 from a scatterplot chart show the average number of decayed teeth per person in different countries, plotted along with average sugar consumption per person, per day.10

But several questions prove more difficult for a majority of U.S. adults.

Survey respondents have comparatively more trouble identifying, from a set of four images, how light passes through a magnifying glass; 46% identify the correct image showing the lines crossing after they pass through a magnifying glass. More than half of the public (54%) choose an incorrect option, including 34% who incorrectly identify the image showing the lines moving outward from each other after passing through the glass.11 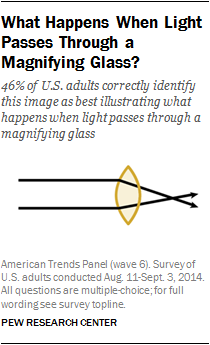 Even fewer Americans are able to identify what property of a sound wave determines the loudness of sound. In all, 35% correctly answer the amplitude, or height, of the wave.

And most Americans are unclear how altitude affects the boiling temperature of water. When asked to consider Denver (at a high elevation) and Los Angeles (near sea level), and whether the boiling temperature of water would change at the higher elevation, 34% correctly answer that water boils at a lower temperature in Denver than in Los Angeles. (For more background on this topic see “Does waters boiling point change with altitude? Americans aren’t sure.”)