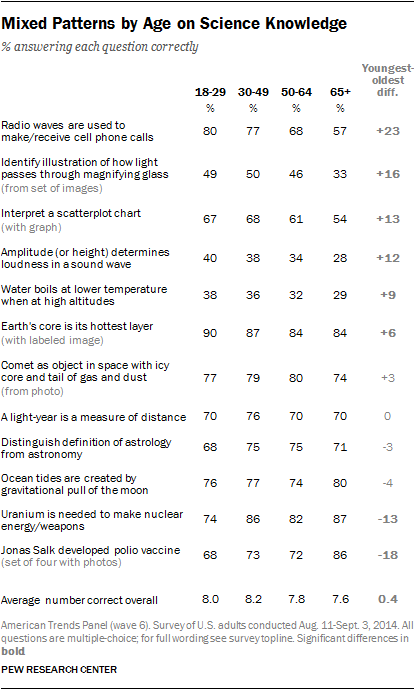 People’s science knowledge sometimes varies by age, race and ethnicity, though the patterns are far from uniform across this set of 12 questions in the new Pew Research survey. On some questions, younger adults tend to know more than their elders (such as which kind of waves underlie cellphone calls). But that pattern is reversed when it comes to awareness that Jonas Salk developed the polio vaccine. Differences by race and ethnicity also vary across the set, with whites answering more of these questions correctly on average than Hispanics or blacks.

There are notable age gaps in knowledge about some science topics. Fully eight-in-ten (80%) adults ages 18 to 29 correctly identify radio waves as the technology underlying cellphone calls. By contrast, 57% of those ages 65 and older know this.

On some questions there are no differences in knowledge across age groups. For example, both younger and older adults are about equally likely to identify a given definition as that of astrology from a list of other choices, including astronomy.

And, when it comes to one aspect of science history, older adults (ages 65 and older) are more likely than younger adults to identify Jonas Salk as the person who developed the polio vaccine when given a list of scientists that also includes Marie Curie, Albert Einstein and Isaac Newton. Fully 86% of those ages 65 and older correctly identify Salk as the vaccine’s developer, compared with 68% of adults ages 18 to 29.

Overall, differences by age across this set of questions are generally modest. The oldest adults – ages 65 and up – score lower, on average 7.6 out of 12 items, compared with younger age groups (ages 18 to 49). But adults under age 30 and those ages 30 to 49 tend to identify a similar mean number of items correctly. 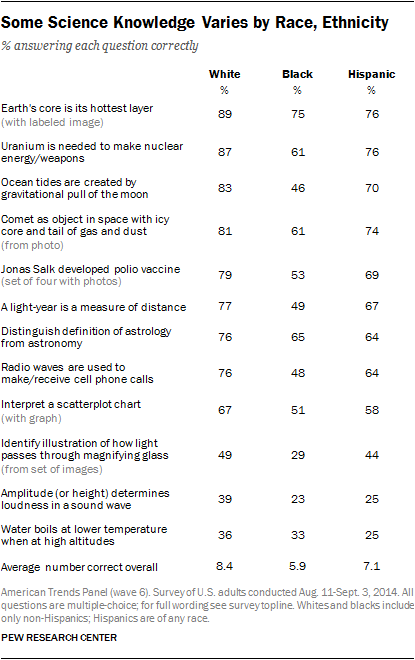 There are also differences by race and ethnicity across these items, on average, with whites knowing the correct answer to more of these questions overall than Hispanics or blacks. Whites score a mean of 8.4 items out of 12 correct, compared with 7.1 among Hispanics and 5.9 among blacks.16

One of the largest differences between blacks and whites occurs on a question about the ocean tides: 83% of whites compared with 46% of blacks correctly identify the gravitational pull of the moon as one factor in ocean tides. (Hispanics fall in between these two groups, with 70% answering this question correctly.) On one of the more difficult questions, a roughly equal share of whites (36%) and blacks (33%) correctly identify a difference found in cooking at higher altitudes: that water boils at a lower temperature. A quarter (25%) of Hispanics answered this question correctly.

Educational differences across race and ethnic groups may contribute to science knowledge differences among whites, blacks and Hispanics. But whites tend to score higher, on average, on this set of science knowledge questions than do either Hispanics or blacks, even after controlling for education. Such comparisons need to be made cautiously due to the smaller number of respondents in this survey who are African-American (n=259) or Hispanic (n=247). The sample size of these subgroups does not allow for detailed comparisons by education level.

Science knowledge differences by race and ethnicity have also been found in other surveys. As detailed in a later section, previous Pew Research surveys have also found knowledge differences by race and ethnicity on a range of science topics. On the factual science knowledge questions collected on the General Social Survey (GSS) between 2006 and 2014, for example, whites scored an average of 6.1 out of 9 questions correctly, compared with 4.3 for blacks and 4.8 for Hispanics. Racial and ethnic group differences in mean numbers of correct responses on that scale occur even when controlling for education level.17

Differences by race and ethnicity could tie to a number of factors, including long-standing disparities among race and ethnic groups on science achievement tests; differences in areas of study at the high school, college and postgraduate levels; and other factors.18 To the extent that science knowledge, especially on issues in the news and emerging scientific developments, is learned in connection with adult life activities, the continued underrepresentation of racial and ethnic minority groups in science, technology, engineering and mathematics workforce could also be a contributing factor.19 (For more on this see topic see “The race gap in science knowledge.”)