This appendix provides an overview of the data sources and analytic approaches used in the report. 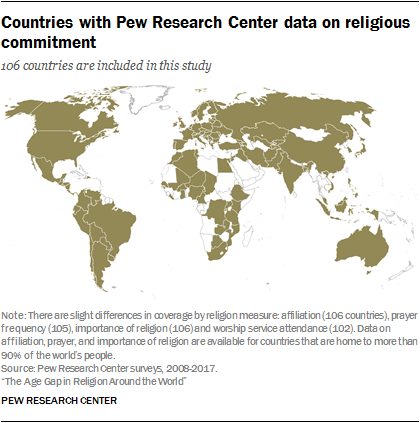 Figures on various measures of religious commitment presented in this report come from a variety of surveys carried out by the Pew Research Center between 2008 and 2017. These surveys use consistent wording in questionnaires to measure religious commitment across years and geographical areas:

Pew Research Center’s annual spring surveys that measure global attitudes in 25 to 40 countries also collect some data on religion. They measure up to four indicators of religious commitment: religious affiliation, prayer frequency, attendance frequency and how important religion is to a person. This report uses data on these indicators collected during the 2013, 2015 and 2017 global attitudes surveys for countries not covered in surveys that focus on religion. Details about methods used in the 2013, 2015 and 2017 Global Attitudes surveys are available online.

In this report, data from each country are weighted equally without taking population size into account when calculating averages across all countries globally and in each region.

Dividing younger and older adults at 40

Partitioning the world’s adults into halves representing “older” and “younger” was done for the sake of illustrating broad trends in a simple way. The same general pattern described in the report still holds if the generational divide is made at a slightly younger or older threshold. Moreover, defining the transition from younger adults to older adults at 40 is not completely arbitrary. There are a few reasons this cutoff might be better than others. The differences in religiosity between older and younger adults might be due to changes over the lifespan, changes between generations, or (likely) both, so both processes were considered. 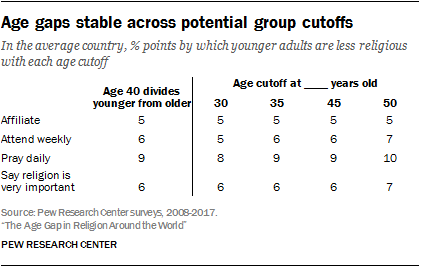 Research, particularly in countries with advanced economies, has found evidence of changes in religious commitment across the lifespan. Religious identity and commitment may be in flux during young adulthood, with changes tied to major life events like marriage and becoming a parent. The age when people first get married and have children varies widely by region and religion, but a majority of people who will marry or have children have done so by age 40. 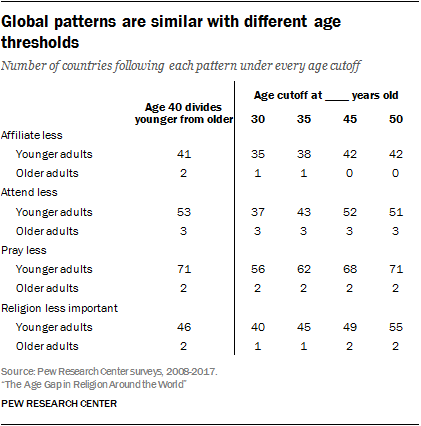 Comparing counts of countries that follow each pattern under different age-group thresholds also shows broad consistency. In the vast majority of countries where there is a significant difference, younger adults typically affiliate less, attend religious services less, pray less and are less likely to say that religion is very important, whether “younger” is defined as everyone under 30, 35, 40, 45, 50, or the country’s median age.

The Age Gap in Religion Around the World 1. Why do levels of religious observance vary by age and country? 2. Young adults around the world are less religious by several measures 3. How religious commitment varies by country among people of all ages Acknowledgments
Appendix A: Methodology
DataMethodsDividing younger and older adults at 40