This report is part of the Pew-Templeton Global Religious Futures population projections project that produced the 2015 report “The Future of World Religions: Population Growth Projections, 2010-2050.” The figures described in this report, including estimated births and deaths by religion and 2015 global population sizes, have not been previously reported. This report also presents results from a November 2014 survey that asked U.S. adults which religious group they think is largest and their expectations for religious change in the decades ahead.

This appendix describes unique aspects of the methodology for this report. A description of the full projections methodology that accompanied the 2015 report is included as Appendix C. Note that Appendix C extensively discusses the 2010 baseline for the projections. The results in this report focus on expected change between 2010 and 2015, including estimates of 2015 population sizes, as well as expected change through 2060.

The remainder of this appendix briefly describes the methodology behind the population projections and how births and deaths were estimated for this report. It also describes the American Trends Panel, on which the November 2014 survey was conducted.

About the population projections

While many people have offered predictions about the future of religion, Pew Research Center has undertaken the first formal demographic projections using data on age, fertility, mortality, migration and religious switching for multiple religious groups around the world. Demographers at Pew Research Center in Washington, D.C., and the International Institute for Applied Systems Analysis (IIASA) in Laxenburg, Austria, gathered the input data from more than 2,500 censuses, surveys and population registers since 2009.15

The projections cover eight major groups: Buddhists, Christians, Hindus, Jews, Muslims, adherents of folk religions, adherents of other religions and the unaffiliated. Because censuses and surveys in many countries do not provide information on religious subgroups – such as Sunni and Shia Muslims or Catholic, Protestant and Orthodox Christians – the projections are for each religious group as a whole. Data on subgroups of the unaffiliated are also unavailable in many countries. As a result, separate projections are not possible for atheists or agnostics.

The projection model was developed in collaboration with researchers who are world leaders in population projections methodology at the Age and Cohort Change Project at IIASA. The model uses an advanced version of the cohort-component method typically employed by demographers to forecast population growth. It starts with a population of baseline age groups, or cohorts, divided by sex and religion. Each cohort is projected into the future by adding likely gains (immigrants and people switching in) and by subtracting likely losses (deaths, emigrants and people switching out) year by year. The youngest cohorts, ages 0 to 4, are created by applying age-specific fertility rates to each female cohort in the childbearing years (ages 15 to 49), with children inheriting the mother’s religion.16

In the process of gathering input data and developing the projection model, Pew Research Center previously published reports on the current size and geographic distribution of major religious groups, including Muslims (2009), Christians (2011) and several other faiths (2012). An initial set of projections for one religious group, Muslims, was published in 2011, although it did not attempt to take religious switching into account. The first report on these projections was published in 2015.

Some social theorists have suggested that as countries develop economically, more of their inhabitants will move away from religious affiliation. While that has been the general experience in some parts of the world, notably Europe, it is not yet clear whether it is a universal pattern.17 In any case, the projections in this report are not based on theories about economic development leading to secularization.

Rather, the projections extend the recently observed patterns of religious switching in all countries for which sufficient data are available (70 countries in all). In addition, the projections reflect the United Nations Population Division’s expectation that in countries with high fertility rates, those rates gradually will decline in coming decades, alongside rising female educational attainment. And the projections assume that people gradually are living longer in most countries.

Some cautionary words about these projections are essential. Population projections are estimates built on current population data and assumptions about demographic trends, such as declining birth rates and rising life expectancies in particular countries. The projections are what will occur if the current data are accurate and current trends continue. But many events – scientific discoveries, armed conflicts, social movements, political upheavals, natural disasters and changing economic conditions, to name just a few – can shift demographic trends in unforeseen ways. For example, China’s 1.4 billion people (as of 2015) loom very large in global trends. At present, about 5% of China’s population is estimated to be Christian, and more than 51% is religiously unaffiliated. Because reliable figures on religious switching in China are not available, the projections do not contain any forecast for conversions in the world’s most populous country. But if Christianity expands in China in the decades to come – as some experts predict – then by 2060, the global numbers of Christians may be higher than projected, and the decline in the percentage of the world’s population that is religiously unaffiliated may be even sharper than projected.18

Finally, readers should bear in mind that within every major religious group, there is a spectrum of belief and practice. The projections are based on the number of people who self-identify with each religious group, regardless of their level of observance. What it means to be Christian, Muslim, Hindu, Buddhist, Jewish or a member of any other faith may vary from person to person, country to country, and decade to decade.

For a more complete description of the projections methodology that accompanied the 2015 report, see Appendix C.

Estimates of births and deaths

This report is based on new analysis of previously unreleased data from the population projections described in Pew Research Center’s 2015 report, “The Future of World Religions: Population Growth Projections, 2010-2050.” This is the first report to publish estimates of global births and deaths by religion. Estimates of births and deaths by religion are generated from a population projection model incorporating data on each group’s fertility rates, age and sex distribution and the prevailing mortality rates in the countries where each group is concentrated. Unfortunately, vital statistics data recording parent’s religion at birth and one’s religion at death are generally not collected, so estimates of births and deaths by religion at the global level must be estimated rather than directly measured.

Religious composition in 2015 is projected from a 2010 baseline. The projection model is built on the assumption that fertility and mortality rates will decline over time in countries that begin with high fertility and mortality rates. For the 70 countries with available data, these projections take into account patterns of religious switching. Projection results reported here extend to the year 2060.

Although this report contains different data points than the 2015 report, they share the same input data and projection modeling. Updating all the input data for global religious projections is a monumental undertaking, and in many countries the new data necessary for this work will not be available until the 2020 wave of government censuses are complete. The Center’s prior global projection report focused on 2010 and 2050. By focusing on the year 2015, this report provides a more up-to-date estimate of the global religious landscape.

Data for the sidebar “What Americans believe and expect about the global size of religious groups” in this report are drawn from the November 2014 wave of Pew Research Center’s American Trends Panel (ATP), a nationally representative panel of randomly selected U.S. adults living in households. This wave of the ATP was conducted Nov. 17 to Dec. 15, 2014 among 3,212 respondents (2,856 by web and 356 by mail). The margin of sampling error for the full sample of 3,212 respondents is plus or minus 2.3 percentage points.

At the time the November 2014 wave of the ATP was conducted, respondents who self-identified as internet users (representing 89% of U.S. adults) participated in the panel via monthly self-administered web surveys; those who did not use the internet participated via telephone or mail. The panel is managed by Abt SRBI.

All members of the American Trends Panel as of November 2014 were originally recruited from the 2014 Political Polarization and Typology Survey, a large (n=10,013) national landline and cellphone random-digit dial (RDD) survey conducted Jan. 23 to March 16, 2014, in English and Spanish. At the end of that survey, respondents were invited to join the panel. The invitation was extended to all respondents who use the internet (from any location) and a random subsample of respondents who do not use the internet.19

The ATP data were weighted in a multistep process that begins with a base weight incorporating the respondents’ original survey selection probability and the fact that some panelists were subsampled for invitation to the panel. Next, an adjustment was made for the fact that the propensity to join the panel and remain an active panelist varied across different groups in the sample. The final step in the weighting uses an iterative technique that matches gender, age, education, race, Hispanic origin and region to parameters from the U.S. Census Bureau’s 2012 American Community Survey. Population density is weighted to match the 2010 U.S. Decennial Census. Telephone service is weighted to estimates of telephone coverage for 2014 that were projected from the National Health Interview Survey conducted from July to December 2013. It also adjusts for party affiliation using an average of the three most recent Pew Research Center general public telephone surveys, and for internet use using as a parameter a measure from the 2014 Survey of Political Polarization. Sampling errors and statistical tests of significance take into account the effect of weighting. The Hispanic sample in the American Trends Panel is predominantly native born and English speaking. 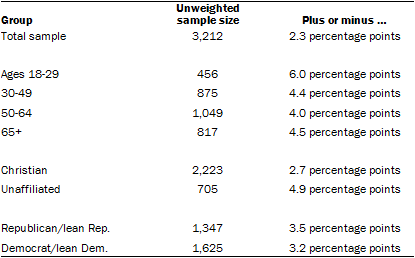 Since November 2014, several additional waves of the ATP have been conducted. For more information about the ATP, see https://www.pewresearch.org/methodology/u-s-survey-research/american-trends-panel/.

The Changing Global Religious Landscape Acknowledgments
Appendix B: Methodology for this report
About the population projectionsEstimates of births and deathsThe American Trends Panel (ATP)