Around the world, Muslims who use the internet are much more likely than other Muslims to have a favorable opinion of Western movies, music and television and are somewhat more likely to see similarities between Islam and Christianity, according to an analysis of a recent Pew Research Center survey.

The survey of Muslims in 39 countries across the Middle East, Europe, Asia and Africa finds that a median of 18% use the internet in their home, school or workplace. However, internet use varies widely across the countries surveyed, ranging from just 2% of Muslims in Afghanistan to a majority (59%) in Kosovo.

In the 25 countries where there are enough Muslims who use the internet to permit more detailed analysis, the survey finds that internet users tend to be younger and better educated than Muslims who are not online. They also include a somewhat higher proportion of men. But statistical analysis shows that internet use is strongly associated with Muslims’ attitudes toward Western popular culture even when factors such as age, education and gender are taken into account. Holding all else equal, Muslims who use the internet are much more inclined to like Western movies, music and television, and they are somewhat less inclined to say that Western entertainment is harming morality in their country.

The survey also finds that Muslims who use the internet are somewhat more likely than those who are not online to see commonalities between their own faith and Christianity. Statistical analysis shows that internet use is associated with a more open attitude toward Christianity even when controlling for demographic factors such as age, education, gender, level of religious observance and participation in interfaith activities.

When it comes to interpretations of their own faith, however, internet use does not appear to make much difference in Muslims’ views. Regardless of whether they use the internet or not, majorities of Muslims in most countries surveyed say that there is only one true way to interpret their faith and that Islam alone leads to eternal life in heaven. Statistical analysis finds little difference between internet users and non-users on these questions. 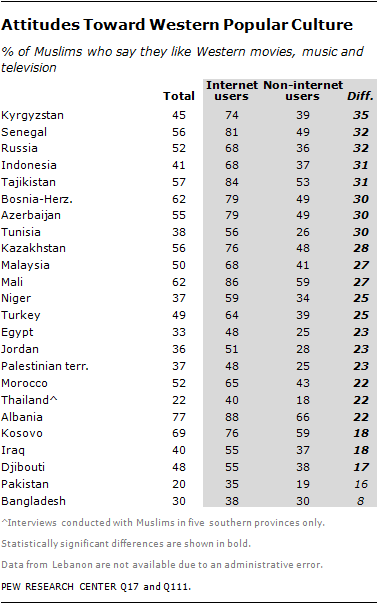 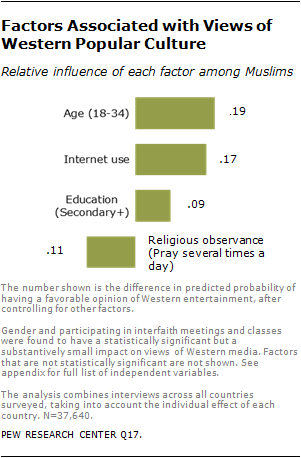 By contrast, religiously observant Muslims – those who say they pray several times a day – are 11 percentage points less likely to have favorable views of Western movies, music and television, after controlling for other factors.

In a follow-up question, Muslims were asked if they think Western movies, music and television hurt morality in their country. After controlling for demographic factors and religious observance, Muslims who use the internet are somewhat less likely than non-users to say that Western entertainment hurts morality. 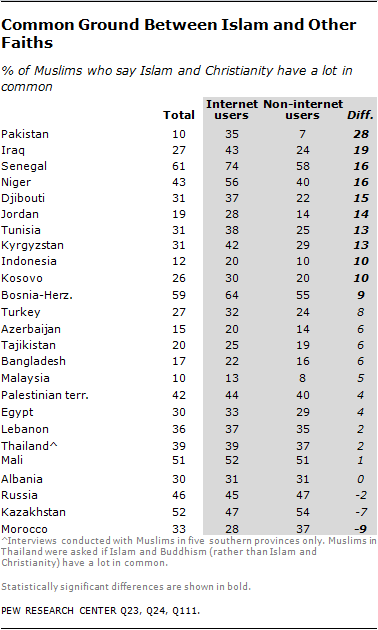 In only one country – Morocco – is the relationship reversed, with internet users significantly less likely to see common ground between Islam and Christianity.

Further statistical analysis shows that both internet use and higher education have a modest but discernible impact on Muslims’ views of Christianity. When other variables are held constant, Muslims around the world who use the internet or have at least a secondary education are somewhat more likely to see commonalities between Islam and Christianity. 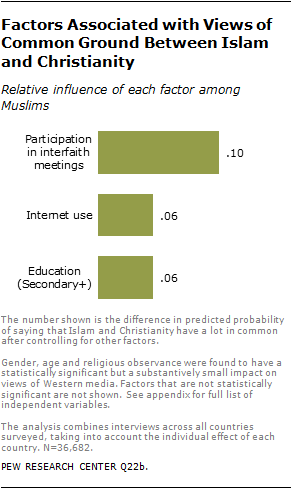 However, participating in interfaith meetings or classes with Christians is more strongly associated with Muslims’ attitudes toward Christianity.

The survey findings also show that internet use has relatively little influence on Muslims’ views of Islam’s teachings. Holding other factors constant, Muslims who use the internet are about as likely as those who do not use it to say that Islam is the only path to heaven (rather than saying that many faiths can lead to eternal salvation). Internet users and non-users also are about equally inclined to say that Islam has only one true interpretation.

Overall, the best predictor of Muslims’ views on these questions is religious observance. Holding everything else constant, Muslims who pray several times a day are more likely to take exclusivist religious positions than are those who pray less often.

Appendix: About the Analysis

A logistic regression analysis was conducted on the full sample (total sample size for each dependent variable varies and is noted in each bar chart) to determine the independent impact of each factor on Muslims’ attitudes toward Western music, movies and television; Christianity; and the interpretation of Islamic teachings.

The analysis combines interviews across all countries surveyed, taking into account the individual effect of each country. Regression results are statistically significant at the .05 level. The dependent variables are:

The independent variables are:

Education: Secondary education or higher compared with all others

Religious observance: Those who pray several times a day compared with all others

Internet use: Those who use the internet compared with all others

This analysis was written Neha Sahgal, Senior Researcher, Pew Research Center’s Forum on Religion & Public Life. It is based on statistical regression models presented by the author at the May 2013 annual conference of the World Association of Public Opinion Research.