As the Pentagon prepares to release its highly anticipated survey of military personnel about the “Don’t Ask, Don’t Tell” policy, most Americans (58%) say they favor allowing homosexuals to serve openly in the armed forces. Fewer than half that number (27%) oppose allowing gays and lesbians to serve openly.

These opinions have changed little in recent years. Since 2005 – including three surveys this year – roughly 60% have consistently favored permitting homosexuals to serve openly in the military. There is greater support for permitting gays to serve openly today than there was in 1994, after President Clinton put in place the “Don’t Ask, Don’t Tell” policy. In July of 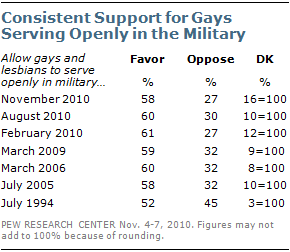 that year, 52% said they favored allowing gays and lesbians to serve openly in the military while 45% said they opposed allowing this.

The national survey by the Pew Research Center for the People & the Press and the Pew Forum on Religion & Public Life, conducted Nov. 4-7 among 1,255 adults, finds continuing partisan and religious differences in opinions about whether to permit gays and lesbians to serve openly in the nation’s armed forces.

Nearly half (48%) of white evangelical Protestants oppose letting gays serve openly in the military, while just 34% support this proposal. Majorities or pluralities across other religious groups favor allowing gays to serve openly.

The balance of opinion across age groups is in favor of letting gays serve openly. Those 65 and older are the only age group in which fewer than half (44%) favors this; still just 28% of seniors are opposed to gays and lesbians serving openly while an identical percentage offers no opinion.

Two-thirds of college graduates (67%) favor gays and lesbians serving openly, as do more than half of those with some college experience (55%) and those with no more than a high school education (54%).

The differences in opinions across political and demographic groups also were evident in 1994. Since then, the balance of opinion among most groups has become more favorable. (For more on changes in opinion about gays in the military, see Support for Same-Sex Marriage Edges Upward, Oct. 6, 2010.) 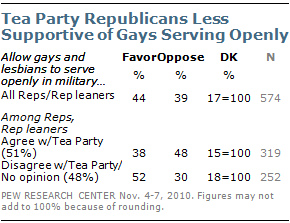 Most of the analysis in this report is based on telephone interviews conducted November 4-7, 2010 among a national sample of 1,255 adults 18 years of age or older living in the continental United States (828 respondents were interviewed on a landline telephone, and 427 were interviewed on a cell phone, including 189 who had no landline telephone). Interviewing was conducted under the direction of Princeton Survey Research Associates International. Both the landline and cell phone samples were provided by Survey Sampling International. Interviews were conducted in English. For detailed information about our survey methodology, see: http://pewresearch.org/politics/methodology/

The Pew Research Center for the People & the Press is an independent opinion research group that studies attitudes toward the press, politics and public policy issues. The Center’s purpose is to serve as a forum for ideas on the media and public policy through public opinion research. In this role it serves as an important information resource for political leaders, journalists, scholars, and public interest organizations. All of the Center’s current survey results are made available free of charge.

Tea Party Republicans Are Less SupportiveAbout the SurveysAbout the Projects