When asked which president has done the best job in their lifetimes, more Americans name Barack Obama than any other president. More than four-in-ten (44%) say Obama is the best or second best president of their lifetimes, compared with about a third who mention Bill Clinton (33%) or Ronald Reagan (32%). 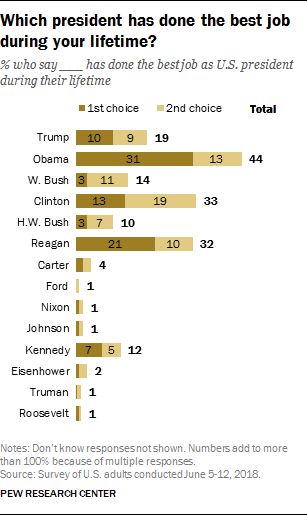 Not yet halfway through his term, 19% say Donald Trump has done the best or second best job of any president of their lifetimes. That is comparable with the share who viewed Obama as one of the best presidents in 2011 (20%).

The survey by Pew Research Center, conducted June 5-12 among 2,002 adults, asks people in an open-ended format which president has done the best job in their lifetimes. The analysis is based on their first and second choices.

About one-in-ten adults (12%) say John F. Kennedy did the best job in office during their lifetimes. But Kennedy is named as the best or second best president by about a quarter of those who were alive during his presidency: 24% of Baby Boomers and 25% of those in the Silent Generation.

Generations’ views of the best president

Older generations are much more likely than Millennials to name Reagan as one of the best presidents. Reagan was president before most Millennials were born. 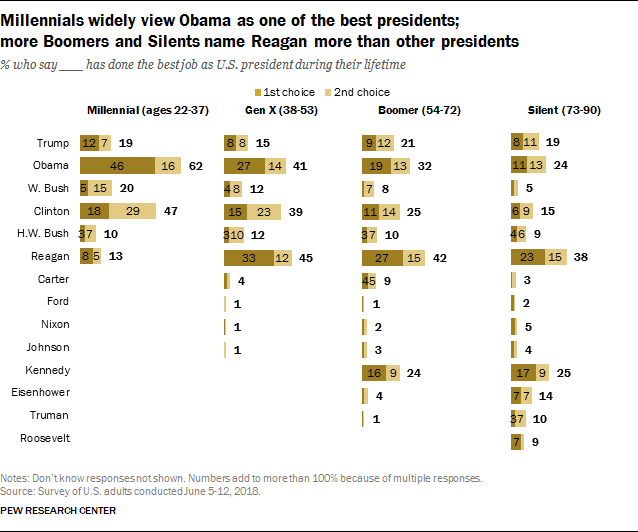 Reagan is the top choice among Boomers (ages 54 to 72) and Silents (ages 73 to 90); about four-in-ten in the two older generations name Reagan (42% of Boomers, 38% of Silents). But within both generations, there are a range of opinions, with Obama, Kennedy, Clinton and Trump all receiving mentions from 15% or more Boomers and Silents.

Changing views of the best president 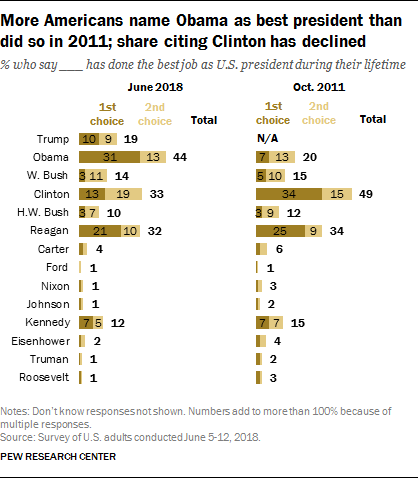 As was the case in 2011, many people, including many in the president’s own party, do not name the current president as the best in their lifetimes.

Currently, 44% name Obama as their first or second choice for having done the best job of any president of their lifetimes, while 33% name Clinton, 32% Reagan and 19% Trump. In 2011, 49% said Clinton had been one of the top two presidents, compared with 34% who cited Reagan and 20% who mentioned Obama.

A sizable majority of Democrats and Democratic-leaning independents say Barack Obama (71%) is the best (51%) or second best (20%) president in their lifetimes. About half of Democrats name Clinton (49%). Another 14% of Democrats name Kennedy as one of their top two, 12% name Reagan and 10% mention George W. Bush. 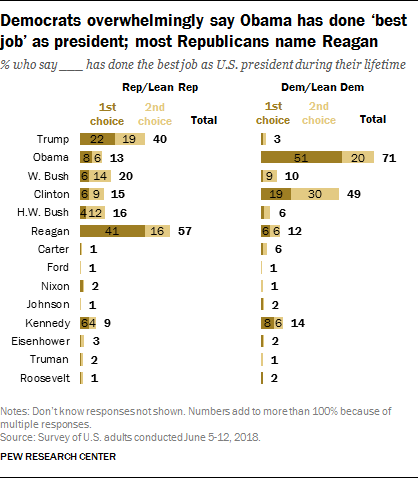 In 2011, Clinton was named most often as the best or second best president by 69% of Democrats, while 36% named Obama.

Republicans’ choices for the best president also have changed since 2011, though the share pointing to Reagan has not changed since then (57%).

Republicans are less likely to name Clinton than in 2011 (28% then, 15% today), while somewhat more say Obama has done the best job of any president of their lifetimes (5% then, 13% today).