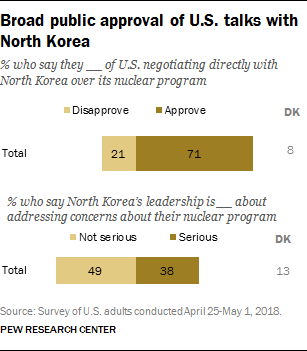 At a time of deep partisan divisions over many issues, foreign and domestic, nearly equal shares in both parties – 50% of Republicans and 49% of Democrats – say they think North Korea’s leadership is not serious about addressing nuclear concerns. 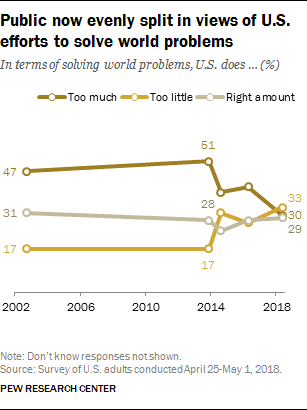 Changing views on whether U.S. does too much – or too little – globally. Americans are now evenly split over whether the U.S. does too little (33%), too much (30%) or the right amount (29%) to solve world problems; that is a change from two years ago, when the plurality view (41%) was that the U.S. did too much globally. The shift has been driven by changes among partisans: Republicans and Republican-leaning independents increasingly say the U.S. is doing the right amount globally, while Democrats and Democratic leaners increasingly think the U.S. is doing too little to solve world problems.

Most approve of direct U.S. negotiations with North Korea 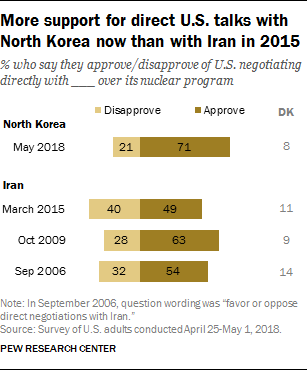 A substantial majority of Americans (71%) approve of the U.S. negotiating directly with North Korea over its nuclear program, while just 21% say they disapprove.

Americans today are more supportive of negotiations with North Korea over its nuclear program than they were of direct U.S. negotiations with Iran during Barack Obama’s administration. (For more on views of the Iran nuclear agreement see Public Skeptical of the Iran Agreement – and Trump’s handling of the Situation.)

About seven-in-ten Americans approve of direct talks with North Korea today; in March of 2015, shortly before the Iran agreement was reached, only about half of the public (49%) supported negotiating directly with Iran over its nuclear program. A larger share (63%) supported direct U.S. talks with Iran in 2009. 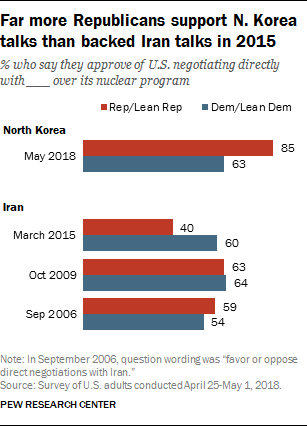 About six-in-ten Democrats and Democratic leaners (63%) currently approve of talks with North Korea. This is roughly the same share that approved of talks with Iran in the fall of 2009 (64%) and spring of 2015 (60%). 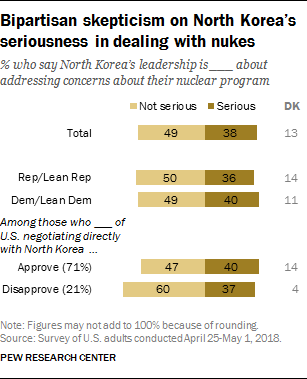 Most Americans have heard about U.S.-North Korea talks 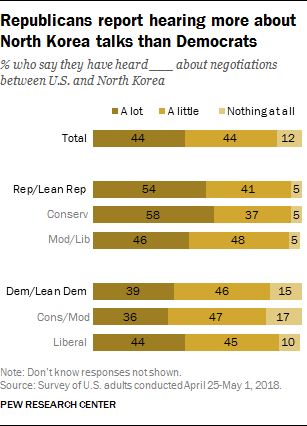 More than four-in-ten Americans (44%) say they have heard “a lot” about negotiations between the U.S. and North Korea, while an additional 44% have heard a little; just 12% have heard nothing at all about the talks.

By contrast, public awareness of the 2015 Iran deal in this survey was much more modest: Just 27% said they have heard a lot about the 2015 Iran nuclear agreement, 46% a little, and 26% nothing at all. (Note: This survey was conducted before President Trump’s May 8 announcement that the U.S. would withdraw from the Iran deal).

The negotiations between the U.S. and North Korea are resonating more among Republicans than Democrats. More than half (54%) of Republicans and Republican-leaning independents say they have heard a lot about the U.S.-North Korea talks, compared with 39% of Democrats and Democratic leaners. 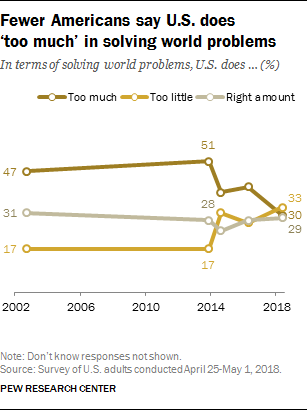 Public assessments of the United States’ global role have shifted over the last two years, as views among Republicans and Democrats have moved in sharply different directions following the change in presidential administrations.

Current views mark a shift from April 2016. Two years ago, a 41% plurality said the U.S. did too much to solve global problems; fewer said the country did too little (27%) or about the right amount (28%). 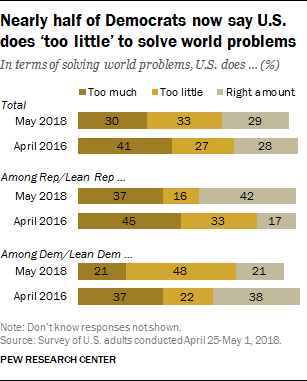 Among Democrats and Democratic leaners, nearly half (48%) say the U.S. does too little to solve world problems, up from just 22% two years ago. There has been a 16-percentage-point decline in the share of Democrats who say the U.S. does too much to help solve world problems, and a 17-point decline in the share saying it does about the right amount. 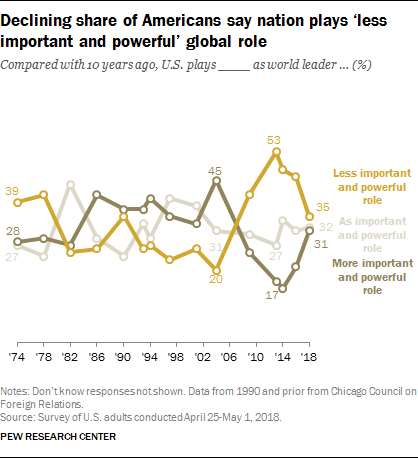 The public also is divided in assessments of the country’s role as a global leader today versus 10 years ago.

Overall, 35% say the U.S. plays a less important and powerful role as a world leader today than it did 10 years ago; roughly as many say it plays about as important a role (32%) or a more important role (31%) than a decade ago.

While divided in their overall views, the public sees a more prominent role for the U.S. today than it did a few years ago. In 2016, 46% said the U.S. played a less important and powerful role as a world leader than it did 10 years prior; smaller shares said its global role was as important (31%) or more important (21%) than it was a decade before. 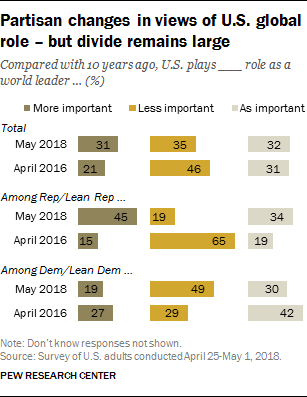 Republicans have become much more likely to say the U.S. plays a more important role as a world leader today than in the past. Overall, 45% say the United States’ global role is more important today than it was a decade ago; in 2016, just 15% of Republicans said this. This shift has been accompanied by a sharp decline in the share of Republicans who think the country’s global role is less important than a decade ago; just 19% say this today, compared with 65% who said this in 2016.

Views among Democrats have moved in the opposite direction. Nearly half (49%) think the U.S. plays a less important leadership role today than it did 10 years ago, up from 29% who said this in 2016. Three-in-ten Democrats say the U.S. global leadership role is about as important as it was 10 years ago and 19% think it is more important; both shares are somewhat lower than they were in 2016.

Views of Russia and China 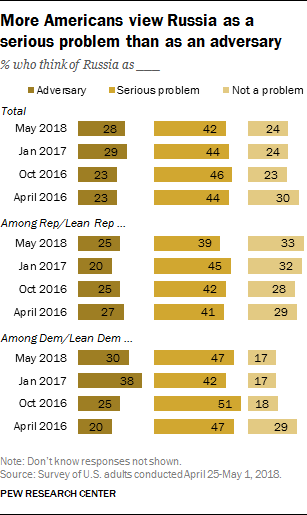 About four-in-ten Americans (42%) say they think of Russia as a serious problem, but not an adversary; fewer (28%) consider Russia an adversary and 24% say the country is not much of a problem. Overall public views are about the same as there were in January 2017, shortly before Donald Trump took office.

As was the case then, about twice as many Republicans (33%) as Democrats (17%) say Russia is “not much of a problem.” However, somewhat fewer Democrats view Russia as an adversary than did so in January 2017 (30% now, 38% then), though the share describing it as either a serious problem or an adversary is little changed. Republicans’ views of Russia have changed little over this period. 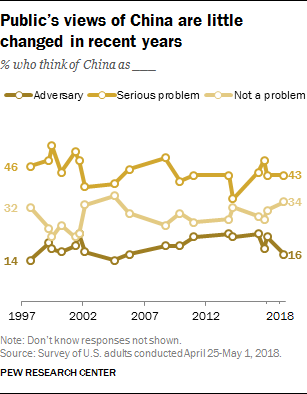 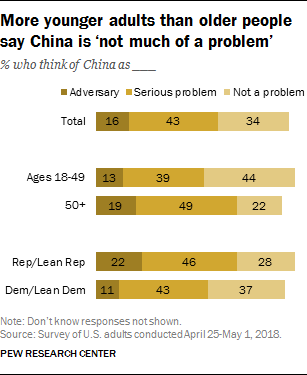 Among Republicans and Republican leaners, 68% say China is a serious problem (46%) or an adversary (22%). A smaller majority of Democrats and Democratic leaners see China in these terms (54%), including just 11% who think of China as an adversary.

Public Supports U.S. Talks With North Korea; Many Doubt Whether Its Leaders Are 'Serious'
Survey ReportMost approve of direct U.S. negotiations with North KoreaMost Americans have heard about U.S.-North Korea talksShifting views of U.S. global role under TrumpViews of Russia and China
Methodology