The latest Pew Research Center News IQ quiz measures the public’s awareness of key facts in the news: from questions about conflicts around the world to the current minimum wage and the chair of the Federal Reserve. (Before reading this report, take the quiz yourself by clicking here.)

In addition, amid ongoing U.S.-led airstrikes against Islamic militants in the Middle East, 67% can identify Syria as one of the countries in which the militant group known as ISIS currently controls territory (from a list that included Pakistan, Kuwait and Egypt). And 60% know that Ukraine was once part of the Soviet Union; the other choices were Czechoslovakia, Yugoslavia and Scandinavia. 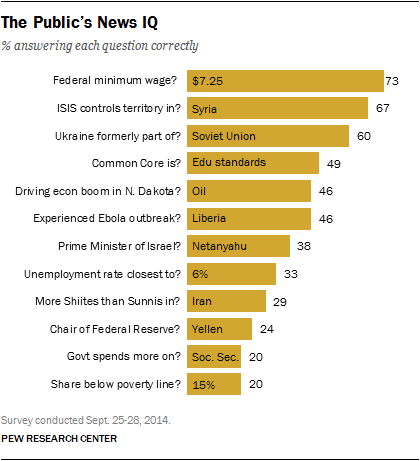 Other questions prove more challenging. About half (49%) know that the term “Common Core” refers to school curriculum standards. Relatively few choose the other options, which include “the military’s code of conduct,” “abdominal exercises” and “a newly developed microprocessor,” but 37% volunteer that they don’t know the answer.

As the death toll from the Ebola crisis rises, 46% are able to identify Liberia from among four African countries as the one that has experienced a major outbreak of the disease. The survey was conducted before a man who had recently arrived in the U.S. from Liberia was diagnosed with Ebola. When it comes to the domestic economy, even fewer (33%) know the unemployment rate is currently closest to 6%; many estimate it higher – 45% say either it is 9% or 12%.

And, as in past News IQ quizzes, questions requiring name recall prove difficult. Just 38% could identify Benjamin Netanyahu as the current prime minister of Israel, while even fewer (24%) named Janet Yellen as the current chair of the Federal Reserve Board (17% say it is Alan Greenspan, who stepped down as Fed chair in 2006).

On nine of the 12 questions included in the survey, only about half or fewer get the answer correct. The average number of correct answers given is five. The news quiz survey was conducted September 25-28 among 1,002 adults. (Full question wording.)

Older adults generally demonstrate higher levels of news knowledge than younger Americans, and there are age divides across several of the questions asked on the survey. 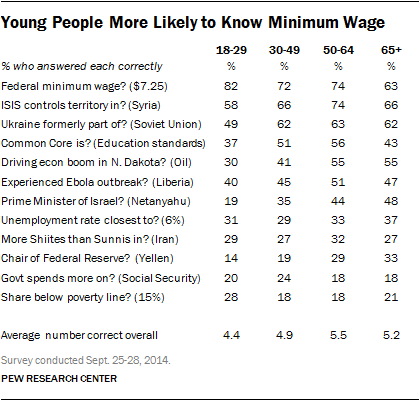 However, young adults are more familiar with the federal minimum wage ($7.25 an hour) than are adults 30 and older: 82% of those under 30 can select the correct minimum wage compared with smaller majorities of older adults.

But young people are less likely to identify the industry that has propelled North Dakota’s economic boom. And just 19% of those under 30 can correctly identify Benjamin Netanyahu as the current Prime Minister of Israel, compared with 48% of those 65 and older.

Notably, the question about the Common Core is difficult for young and old alike: 37% of those under 30 and 43% of those 65 and older know that it is a set of school curriculum standards for language and math. That compares with 51% of those 30 to 49 and 56% of those 50 to 64. 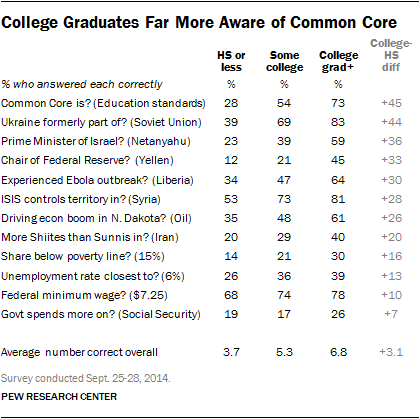 College graduates perform better than those with less education on the News IQ quiz. Those with a college degree get an average of 6.8 questions correct. By comparison, those with some college experience average 5.3 correct answers and those with no more than a high school diploma average 3.7 correct answers.

Respondents across all education levels struggle to identify Social Security as the activity the government currently spends more money on (transportation, foreign aid and interest on the national debt were the three distractor items): just 26% of college graduates know this fact, compared with 17% of those with some college experience and 19% of those with no more than a high school diploma. 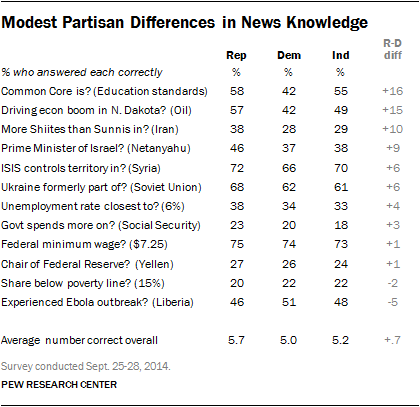 Differences in news knowledge across partisan groups are relatively modest, though Republicans tend to do somewhat better than Democrats overall.

Republicans are 16 points more likely than Democrats to answer the Common Core question correctly (58% vs. 42%). And 57% of Republicans identify the oil industry as a primary driver of growth in North Dakota, compared with 42% of Democrats.

News IQ Quiz: Do you know more about the news than the average American? September 25-28 2014 Weekly Survey Dataset