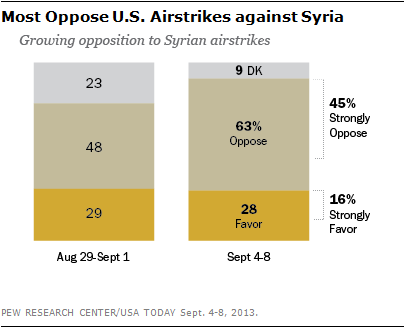 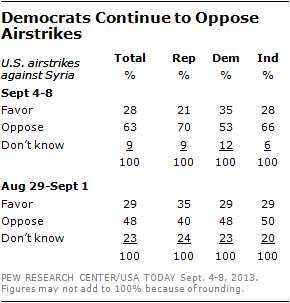 The new survey by the Pew Research Center and USA TODAY, conducted Sept. 4-8, 2013 among 1,506 adults nationwide, finds that this growing opposition to Syrian airstrikes is intense: 45% say they oppose airstrikes very strongly. That is roughly three-times the percentage (16%) that strongly favors airstrikes.

Republicans, in particular, have turned against Syrian airstrikes. A week ago, Republicans were divided about evenly: 35% favored and 40% opposed military airstrikes in response to the government’s alleged use of chemical weapons. Today, Republicans oppose airstrikes by an overwhelming 70% to 21% margin, with 51% saying they are strongly opposed.

Opposition has grown among independents as well, with two-thirds (66%) now opposed, up from half (50%) last weekend. Today, 50% of independents strongly oppose airstrikes, compared with just 15% who are strongly in favor.

Despite Obama’s efforts to raise support for military action, Democrats continue to oppose airstrikes. Currently, 53% of Democrats oppose military airstrikes against Syria while 35% support them; the margin is little changed from a week ago (29% favored, 48% opposed).

As the debate over military action in Syria intensifies, Barack Obama’s standing with the public has declined. Obama’s overall job approval has slipped into negative territory (44% approve, 49% disapprove) for the first time since early last year. Public ratings of his handling of foreign policy – once an area of relative strength for the president – have slipped and now just 33% approve of his handling of the issue. And when it comes to Obama’s handling of Syria in particular, more disapprove than approve by nearly two-to-one (56% vs. 29%). 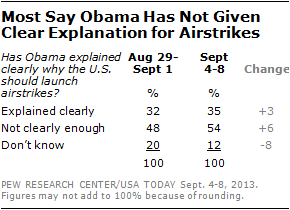 As Obama prepares for his prime-time address on Syria on Tuesday, a majority of Americans (54%) say he has not explained clearly why the United States should launch military airstrikes against the country while 35% say he has. As with overall support for the operation, Obama has made little headway in offering a clear rationale for military action. A week ago, 32% said he had explained clearly the reasons for airstrikes and 48% said he had not. 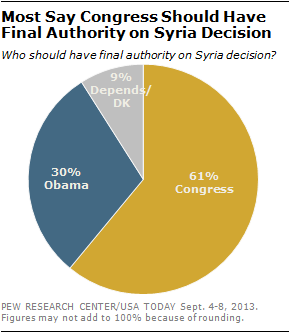 And the public, by roughly two-to-one (61% to 30%), believes that Congress – not the president – should have final authority over whether the U.S. conducts airstrikes in Syria. Fully 75% of Republicans and 64% of independents say Congress should be the ultimate arbiter of whether the U.S. launches airstrikes. Democrats are divided, with 47% saying Congress should have final authority and 45% the president.

Majority Says U.S. Must Show Disfavor with Chemical Weapons Use 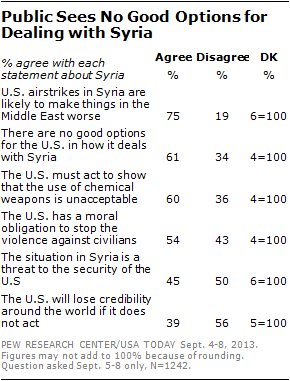 A narrow majority of the public (54%) says the U.S. has a moral obligation to stop the violence against civilians. But an even higher percentage (75%) says that U.S. airstrikes in Syria are likely to make things in the Middle East worse. And just 39% say the U.S. will lose credibility around the world if it does not act in Syria.

The public is divided over whether the situation in Syria is a threat to U.S. security: 45% say it is, while 50% say it is not.

Large majorities of the supporters of military airstrikes against Syria agree with arguments being made in favor of the use of force. Fully 92% say the U.S. must show that the use of chemical weapons is unacceptable and 83% think the U.S. has a moral obligation to stop violence against civilians in Syria.

Most of those who favor airstrikes also say U.S. international credibility will be weakened if the U.S. does not act (70% agree) and that the Syria situation is a threat to U.S. security (66%).

Yet a majority of the supporters of U.S. military action (57%) also say that airstrikes in Syria are likely to make things in the Middle East worse.

Among opponents of airstrikes, 84% say military action is likely to make things worse in the region. And most reject the idea that failure to act in Syria will undermine U.S. credibility (70%) and that the situation there threatens U.S. security (59%).

Notably, opponents of U.S. airstrikes are divided over whether the United States must act to demonstrate that the use of chemical weapons is unacceptable (47% agree/49% disagree).

The only statement on which majorities of supporters and opponents of airstrikes agree is that the United States lacks good options in Syria. About seven-in-ten supporters (72%) of U.S. airstrikes think the U.S. has no good options as do a smaller majority of opponents (57%). 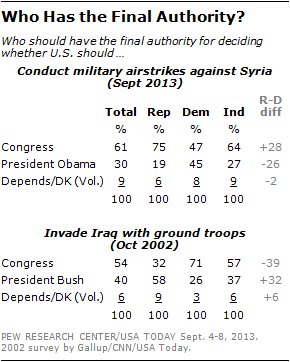 By two-to-one, more Americans say the final authority for deciding whether the United States should conduct military airstrikes against Syria rests with Congress (61%), not President Obama (30%). 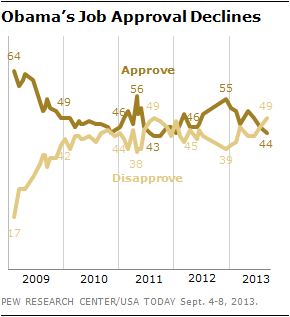 Obama’s job approval rating has dropped over the last few months and has now edged into negative territory. Today, 44% of Americans approve of the way he is handling his job, while 49% disapprove. As recently as June, more approved of his performance than disapproved (49% vs. 43%). Obama’s current job rating matches previous lows in the summer and fall of 2011.

Independents’ ratings of Obama have followed a similar trajectory. Currently 36% of independents approve of Obama’s performance while 55% disapprove. Earlier this year independents’ views were more divided.

Obama’s job approval rating among Democrats and Republicans is little changed. About eight-in-ten Democrats (79%) – including 85% of liberal Democrats — continue to approve of the job Obama is doing. And while just 14% of Republicans today approve of Obama’s performance, this is consistent with his ratings among Republicans over the course of his administration. 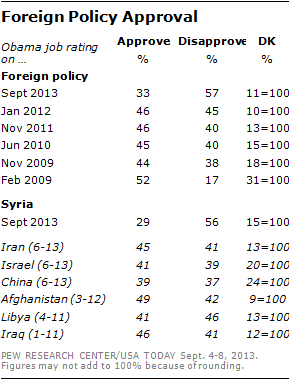 Opinions of Obama’s handling of foreign policy – once an area of relative strength for the president – are now more negative than his rating on the economy (43% approve).

The public also gives Obama mostly negative marks for his handling of the situation in Syria. About three-in-ten (29%) approve and 56% disapprove of how Obama is dealing with this issue. Obama receives more negative reviews for his handling of Syria than he has for any other specific foreign policy issue. For example, in June 2013, the public was divided on Obama’s handling of Iran, Israel and China while, in March 2012, slightly more approved than disapproved of his handling of Afghanistan.

Republicans are particularly critical of the president’s handling of Syria – just 14% approve and 77% disapprove of how Obama is dealing with this situation – but independents also give him negative marks (26% approve and 59% disapprove).

Democrats, on balance, approve of the way Obama is handling Syria, but his rating on this particular issue is far less positive than his overall foreign policy rating. About half (47%) of Democrats approve and 33% disapprove of Obama’s handling of the situation in Syria.