So far, public interest in a trio of controversies connected to the Obama administration has been limited. Roughly a quarter (26%) of Americans say they are very closely following reports that

the IRS targeted conservative groups. About the same number (25%) are tracking the Benghazi investigation very closely, and even fewer (16%) are very closely following news about the Justice Department subpoenaing phone records of AP journalists.

The new survey by the Pew Research Center, conducted May 16-19 among 1,002 adults, finds that 37% of Republicans are paying very close attention to the IRS story, compared with 21% of Democrats and 25% of independents. And the Benghazi investigation continues to draw much greater interest from Republicans (34% very closely) than Democrats (18%).

A historical review of previous controversies involving White House or cabinet officials finds that these levels of public interest – and the partisan divide in attentiveness – are not necessarily new. Previous scandals – such as the Lewis “Scooter” Libby case during George W. Bush’s administration or the “Pardon-gate” scandal at the end of Bill Clinton’s second term – received similar levels of public attention, and were generally more interesting to those in the opposition party. 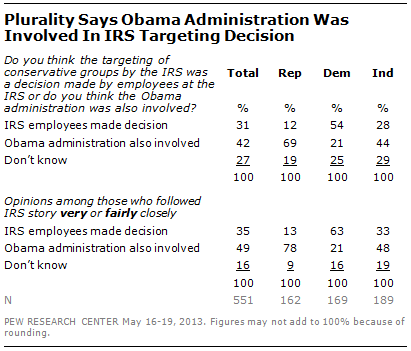 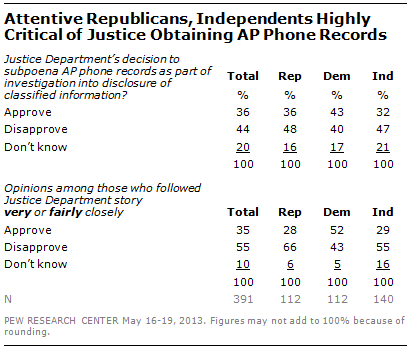 The public is of two minds when it comes to the Justice Department’s decision to subpoena the phone records of AP journalists as part of an investigation into the disclosure of classified information. Slightly more disapprove (44%) than approve (36%) of the DOJ’s actions.

Criticism of the DOJ is substantially higher among those who are paying attention to the story. By a 55% to 35% margin people who have followed reports about the AP phone records at least fairly closely disapprove of the DOJ’s actions. Attentive Republicans are particularly critical: they disapprove by a 66% to 28% margin. 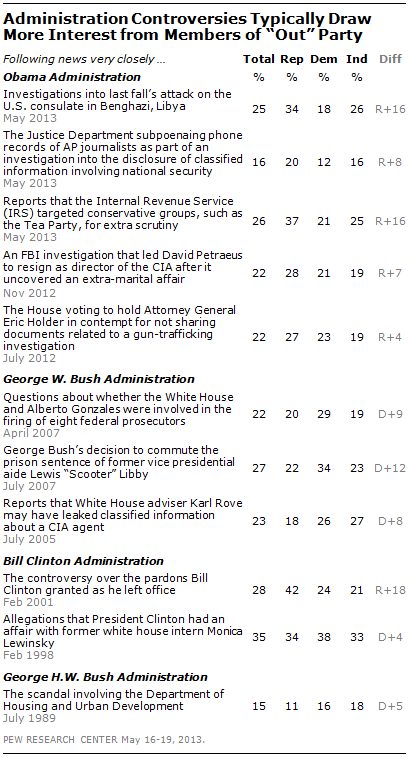 The Pew Research Center has been tracking public interest in news stories for more than two decades, and while each political scandal is unique – and the list is hardly comprehensive – the level of public and partisan interest in the current affairs is largely consistent with prior events.

The “Pardon-gate” controversy at the end of Bill Clinton’s presidency was followed very closely by 28%, with far more interest from Republicans (42%) than Democrats (24%).

The exception to this partisan gap was the public’s first reaction to the Monica Lewinsky story. An early February 1998 survey found 35% following very closely, with high levels of interest across party lines. However, the partisan gap in interest in allegations against Clinton increased during impeachment proceedings later that year.