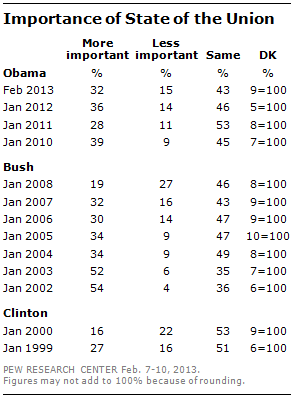 A plurality of the public (43%) views Barack Obama’s upcoming State of the Union as about as important as past years’ addresses. About a third (32%) say Obama’s speech will be more important than those in past years, while 15% say it will be less important.

State of the Union Primer

Public Views of State of the Union 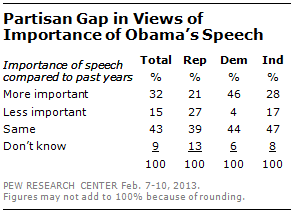 Bush gave his final State of the Union, just 19% viewed it as more important.

As in past years, there are wide partisan differences in opinions about the importance of Obama’s State of the Union address. Far more Democrats (46%) than independents (28%) or Republicans (21%) say Obama’s speech this year will be important than those in prior years.