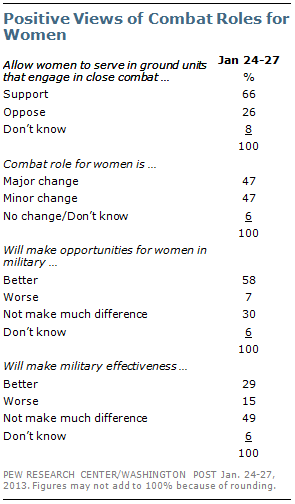 The public broadly supports the military’s decision to lift restrictions on women in combat. Two-thirds (66%) support allowing women in the military to serve in ground units that engage in close combat, while just 26% are opposed. Opinion on this question is little changed from a Washington Post/ABC News survey two years ago.

The latest national survey by the Pew Research Center for the People & the Press and The Washington Post, conducted Jan. 24-27 among 1,005 adults, finds that the public is evenly divided over whether allowing women to take on combat roles represents a major change for the U.S. military: 47% say it is, while an equal percentage says this is just a minor change.

The survey, conducted after Defense Secretary Leon Panetta ended the ban on women serving in ground combat units, finds that most Americans (58%) think that the policy shift will improve opportunities for women in the military.

Majorities of nearly all demographic groups offer support for allowing women to serve in ground units that engage in close combat. 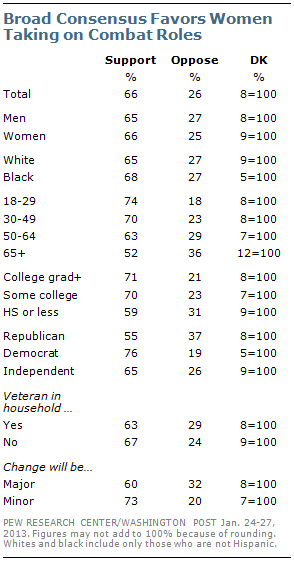 About three-quarters of Democrats (76%) support allowing women in combat roles, as do 65% of independents. Republicans also favor the change in military policy, but by a much narrower 55%-37% margin.

Older Americans are less supportive of the change in military policy than younger Americans. Among those 65 and older, 52% support the decision while 36% are opposed. By contrast, more than seven-in-ten of those younger than 50 (72%) support allowing women to serve in combat roles.

However, those who view the introduction of women into combat roles as a major change are less likely than those who see it as a minor change to support the policy (60% vs. 73%). 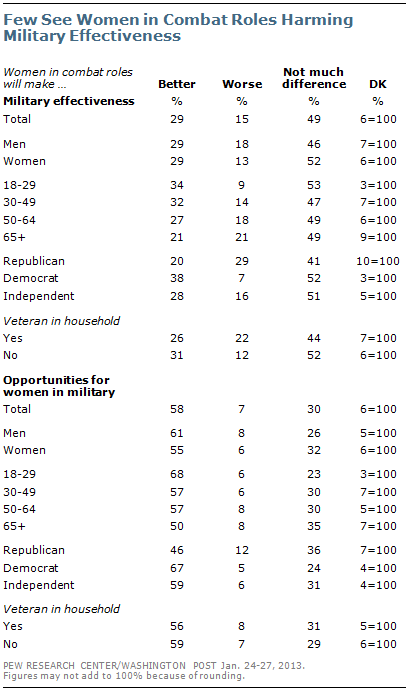 Among those who say they or someone in their household has served in the military, 26% say allowing women in combat roles will improve effectiveness while about as many (22%) say it will make it worse; 44% say it will not make much difference. Among those in non-military households, more than twice as many say the policy shift will have a positive effect (31%) than negative effect (12%); 52% say it will not make much difference.