For decades, the public has sympathized more with Israel than the Palestinians in the Middle East conflict. However, the partisan gap in sympathies, while little changed in recent years, is as large as it has been in more than three decades of polling. 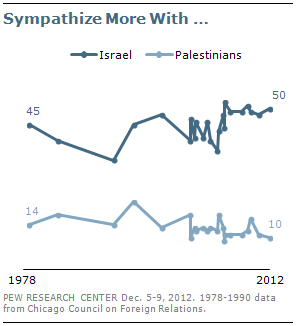 Discussion of the U.S.-Israeli relationship is likely to come to the fore with the nomination of former Nebraska senator Chuck Hagel as President Obama’s new secretary of defense. The choice of Hagel has drawn criticism from some of his former Republican colleagues on Capitol Hill, who have questioned whether he has been supportive enough of Israel. 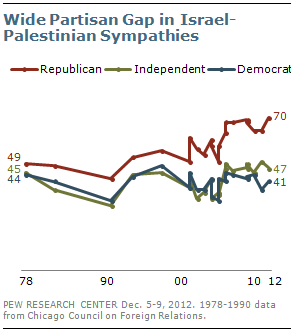 The 29-point partisan gap in the percentages sympathizing more with Israel is about the same as it has been in recent years. But differences were more modest a decade ago, and in 1978, shortly after the Israel-Egypt peace agreement, the gap was just five points.

The differences have widened as Republican support for Israel has grown and Democratic opinion has been more stable. In December, 70% of Republicans sympathized more with Israel, compared with 56% in 2002 and 49% in 1978. Among Democrats, the most recent measure (41%) was little different from the percentage of Democrats who sympathized more with Israel in 2002 (37%) and 1978 (44%). 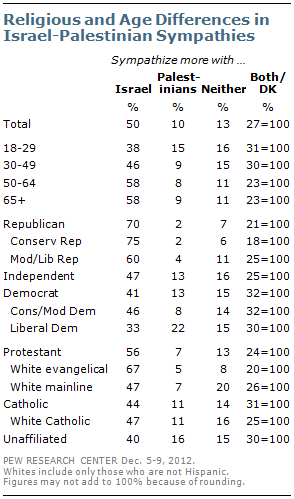 Aside from the partisan gap in Mideast sympathies, there also are religious and age differences in these opinions. As in recent years, the December 2012 survey found that white evangelical Protestants were far more likely to sympathize more with Israel than were members of other religious groups.

Views of U.S. Support for Israel 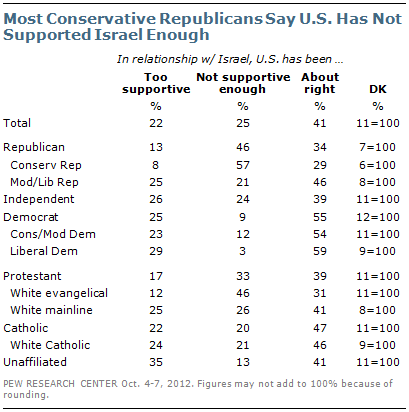 said the U.S. has not been supportive enough of Israel.

Mideast Sympathies: A Closer LookViews of U.S. Support for Israel