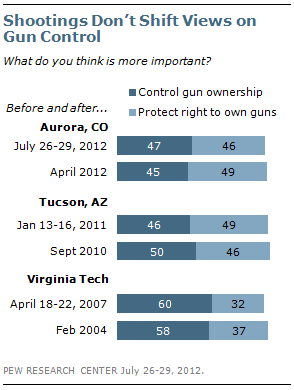 There has been no significant change in public views on the issue of gun control and gun rights following the July 20th shooting at a movie theater in Aurora, Colorado. Currently, 47% say it is more important to control gun ownership, while 46% say it is more important to protect the rights of Americans to own guns. That is virtually unchanged from a survey earlier this year in April, when 45% prioritized gun control and 49% gun rights.

Other recent major shootings also had little effect on public opinion about gun laws. There was no significant change in the balance of opinion about gun rights and gun control after the January, 2011 shooting in Tucson, Arizona in which Congresswoman Gabrielle Giffords was injured. Nor was there a spike in support for gun control following the shooting at Virginia Tech University in April, 2007.

The latest national survey by the Pew Research Center for the People & the Press, conducted July 26-29, 2012 among 1,010 adults, shows that relatively few Americans view the shooting in Aurora as a sign of broader social problems. Two-thirds (67%) say that shootings like 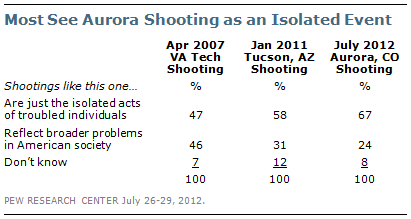 this one are just the isolated acts of troubled individuals. Only about a quarter (24%) say shootings like this reflect broader problems in American society. This is similar to the public reaction after the Tucson shooting in early 2011, which 58% thought of as the isolated act of a troubled individual and 31% connected to broader social problems. Americans were more likely to see broader problems behind the Virginia Tech shooting five years ago – at that time, 46% thought the event reflected broader societal problems. 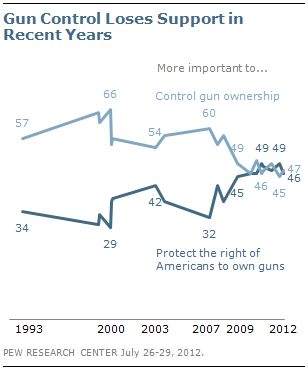 Public opinion about gun control and gun rights has been divided since early 2009. Prior to that, going back to the first Pew Research Center polling on this issue in 1993, majorities consistently rated controlling gun ownership as a higher priority than protecting the rights of Americans to own guns.

The issue remains a highly partisan one: Republicans prioritize gun rights by a 71% to 26% margin, while Democrats prioritize gun control by a 72% to 21% margin. Independents are split, with 50% saying the priority should be protecting the right of Americans to own guns, while 43% say it should be controlling gun ownership.