Developments in the Trayvon Martin murder case and news about the candidates for president topped the public’s news interest last week, with about as many saying they followed news about the economy most closely.

Roughly two-in-ten (22%) say their top story was developments in the legal case against George Zimmerman, the community watch volunteer charged with second degree murder in the death of the Florida teenager. About as many (18%) say they followed election news most closely. Another 17% say their top story was news about the condition of the economy, according to the latest weekly News Interest Index survey, conducted April 26-29 among 1,000 adults by the Pew Research Center for the People & the Press. 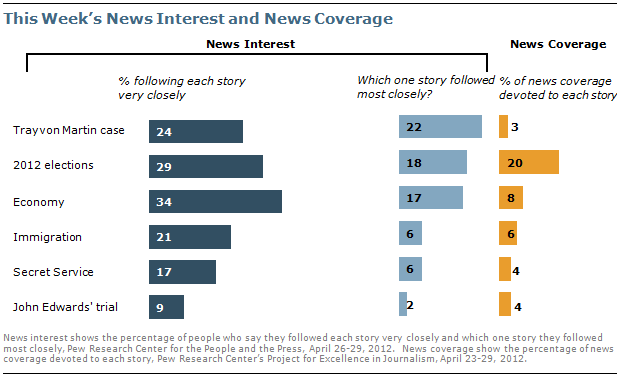 Looking at a separate measure, the percentage of Americans that say they very closely followed news about the economy (34%) or the elections (29%) has changed little in recent weeks. On the other hand, the percentage that says they followed news about the Trayvon Martin case very closely has slipped from 35% in mid-April to 27% two weeks ago to 24% in the latest survey.

The Trayvon Martin story also has received less coverage recently. Last week, developments in the case accounted for 3% of the newshole, according to a separate analysis by the Pew Research Center’s Project for Excellence in Journalism (PEJ). Coverage was greater at the start of the week as Zimmerman was released from jail after posting bail, but fell off as the week unfolded. Two weeks ago, the case accounted for 7% of coverage. One week before that, the week charges were brought against Zimmerman, the Martin shooting accounted for 17% of coverage.

The presidential election topped coverage last week, making up 20% of the newshole, according to PEJ. News about the economy accounted for 8%.

Other stories attracted less public attention. Fewer than one-in-ten (6% each) say their top story was the issue of immigration or developments in the scandal involving Secret Service agents allegedly hiring prostitutes while on assignment in Colombia. Just 2% say their top story was the trial for former Sen. John Edwards on charges of conspiring to illegally send campaign donations to his mistress.

These findings are based on the most recent installment of the weekly News Interest Index, an ongoing project of the Pew Research Center for the People & the Press. The index, building on the Center’s longstanding research into public attentiveness to major news stories, examines news interest as it relates to the news media’s coverage. The weekly survey is conducted in conjunction with The Project for Excellence in Journalism’s News Coverage Index, which monitors the news reported by major newspaper, television, radio and online news outlets on an ongoing basis. In the most recent week, data relating to news coverage were collected April 23-29, and survey data measuring public interest in the top news stories of the week were collected April 26-29, 2012, from a nationally representative sample of 1,000 adults.