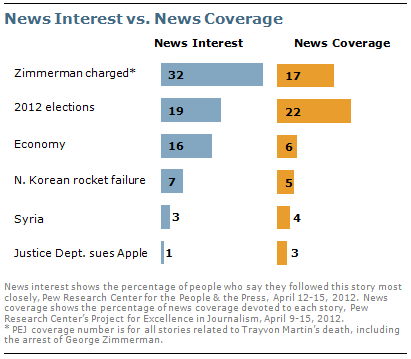 About a third of the public (32%) says they followed news about the charges against Zimmerman more closely than any other news last week, according to the latest weekly News Interest Index survey, conducted April 12-15, 2012, among 1,002 adults by the Pew Research Center for the People & the Press. The controversy over the shooting has been the most closely followed story for four straight weeks.

With the presidential contest shifting toward the fight between Mitt Romney and Barack Obama, news about the 2012 campaign topped coverage last week, making up 22% of the newshole. Still, as prosecutors launched the legal case against Zimmerman, coverage of developments in the Trayvon Martin case was up sharply from one week earlier. Last week, the Trayvon Martin story accounted for 17% of coverage, up from 7% one week earlier, according to the Pew Research Center’s Project for Excellence in Journalism (PEJ). 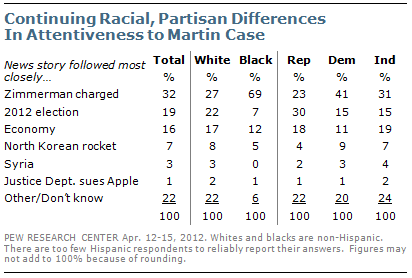 For whites, about as many followed the Zimmerman story most closely (27%) as followed news about the 2012 campaign that closely (22%). The murder charge against Zimmerman was clearly the top story for Democrats and independents. Among Republicans, about as many say their top story was the elections (30%) as say it was the developments in Florida (23%).

Overall, 19% of the public says the 2012 campaign was their top story, as Rick Santorum dropped out of the GOP race and partisans fought over a Democratic consultant’s comments about Ann Romney. Republicans (30%) are twice as likely as Democrats or independents (15%) to say campaign news was the story they followed most closely. About a third of the public (32%) followed election stories very closely, including 43% of Republicans, 36% of Democrats and 23% of independents.

The economy was the top story for 16% of the public, and 39% followed news on this topic very closely. The economy made up 6% of the newshole.

Other topics were of less interest to the public. Just 22% very closely followed news about North Korea’s failed attempt to launch a rocket carrying a satellite; this was the top story for 7% of the public and comprised 5% of coverage.

International efforts to stop political violence in Syria, which led to a tense cease-fire between government troops and rebels, was followed very closely by 14% and was the top story for 3% of Americans. This story made up 4% of the newshole.

Few people closely followed news about the U.S. Justice Department suing Apple and several book publishers for allegedly fixing the price of electronic books. Just 7% of the public followed this story very closely. It was the top story for 1%. According to PEJ, the lawsuit accounted for 3% of coverage. 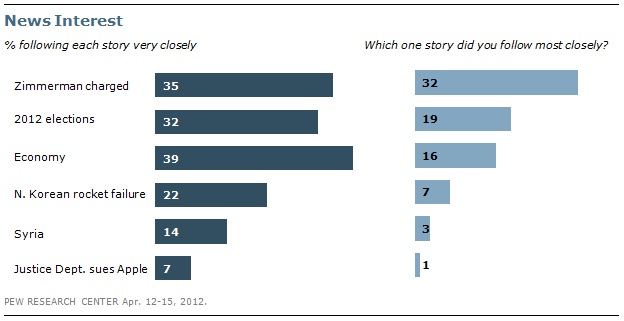 These findings are based on the most recent installment of the weekly News Interest Index, an ongoing project of the Pew Research Center for the People & the Press. The index, building on the Center’s longstanding research into public attentiveness to major news stories, examines news interest as it relates to the news media’s coverage. The weekly survey is conducted in conjunction with The Project for Excellence in Journalism’s News Coverage Index, which monitors the news reported by major newspaper, television, radio and online news outlets on an ongoing basis. In the most recent week, data relating to news coverage were collected April 9-15, and survey data measuring public interest in the top news stories of the week were collected April 12-15, 2012, from a nationally representative sample of 1,002 adults.