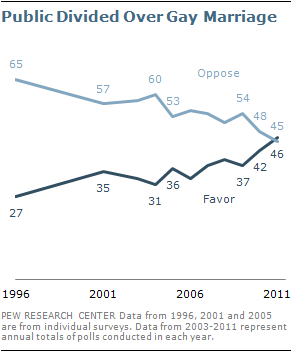 As courts and legislatures address the question of whether same-sex couples should be allowed to legally marry, public support for gay marriage continues to grow. Polls in 2011 by the Pew Research Center for the People & the Press found that an average of 46% favor allowing gays and lesbians to marry legally; about the same percentage (45%) opposes gay marriage. That marked the first time in 15 years of polling that the public has been evenly divided over this issue.

Just two years earlier, in 2009, a clear majority (54%) opposed gay marriage while just 37% favored it. In 1996, when Pew Research first asked about letting gay couples marry legally, almost two-thirds of the public (65%) opposed the idea, and just 27% favored it.

There continue to be substantial generational, partisan and racial differences over gay marriage. Since the 1990s, however, support has increased across most demographic and political groups. 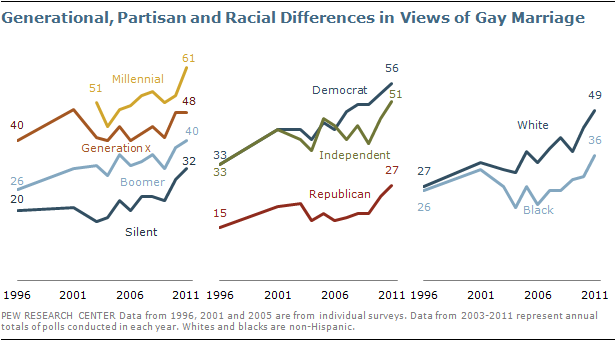 A majority of Democrats (56%) favor allowing gays and lesbians to marry legally, as do 51% of independents. By comparison, just 27% of Republicans favor same-sex marriage while 66% are opposed. In recent years, support for gay marriage has risen sharply among Democrats and independents, while Republicans’ views have shown less change.

Both whites and blacks have become more likely to favor marriage rights for gays in recent years, but the increase in support has been larger among whites. In 2011, 49% off whites and 36% of blacks said they favored allowing gay and lesbian couples to marry legally.

Most Say Homosexuality Should Be Accepted 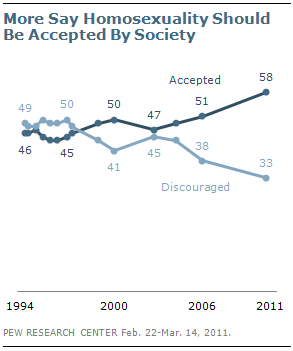 In 1994 and 1995, when the Pew Research Center first began asking about this topic, opinion was about evenly divided. But by 2000, slightly more said homosexuality should be accepted by society than said it should be discouraged (50% vs. 41%).

In 2006, 51% said homosexuality should be accepted, while 38% said it should be discouraged. In 2011, support for societal acceptance of homosexuality again increased, to 58%.