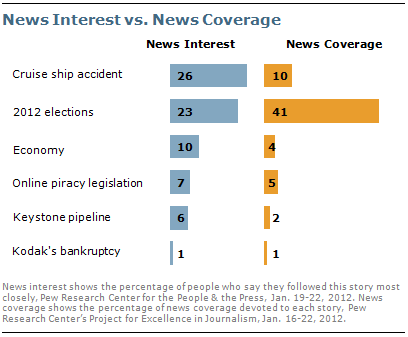 The deadly crash of a cruise ship off of the coast of Italy and the latest developments in the 2012 presidential campaign topped the public’s news interests last week.

About a quarter (26%) say they followed news about the cruise ship accident more closely than any other news. A comparable percentage (23%) say they followed news about candidates for the 2012 presidential election most closely, according to the latest weekly News Interest Index survey, conducted Jan. 19-22 among 1,002 adults by the Pew Research Center for the People & the Press.

But the protest by popular websites against proposed online piracy legislation was a top story for young people. Nearly a quarter (23%) of those younger than 30 say they followed news about the online piracy fight most closely. That is about the same as the percentage following the 2012 elections most closely (21%). Among the public as a whole, just 7% say they followed news about the web protests – which included sites such as Wikipedia going dark for the day – more closely than any other story. 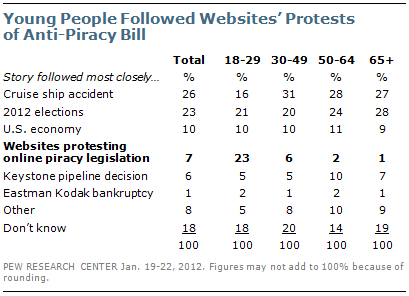 News about the election and the battle for the Republican nomination received much more media attention than any other story. Election news accounted for 41% of coverage, far more than the crash of the Costa Concordia cruise ship. The accident made up 10% of coverage, according to an analysis by the Pew Research Center’s Project for Excellence in Journalism (PEJ).

The protests by popular websites and the debate in Congress over anti-piracy legislation accounted for 5% of the newshole, about the same amount of coverage given to economic news last week (4%).

While Americans are about equally likely to say the 2012 elections or the cruise ship disaster was their top story last week, comparable numbers also say they followed each story very closely. Three-in-ten (30%) say this about the cruise accident and 28% say this about news about the presidential candidates. Partisans are about equally likely to say they followed election news very closely. Overall interest in election news is about the same as it has been since the start of the year.

One-in-ten (10%) say they followed news about the nation’s economy most closely last week. About a third (35%) say they followed this news very closely, a level of interest that has fluctuated little in recent weeks. Economic news made up 4% of coverage, separating out about 1% of coverage devoted to the bankruptcy filing of the Eastman Kodak company.

Just 1% say their top story was the bankruptcy filing last week by Kodak, the once-dominant photo film maker; 7% say they followed this news very closely. About a third of those 65 and older (32%) say they followed this news at least fairly closely, compared with 13% of those under 30. News about the bankruptcy filing accounted for 1% of coverage. 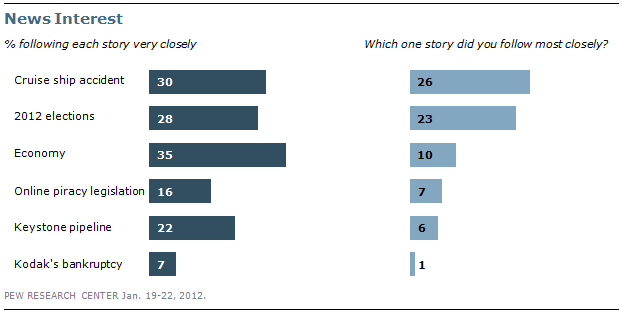 These findings are based on the most recent installment of the weekly News Interest Index, an ongoing project of the Pew Research Center for the People & the Press. The index, building on the Center’s longstanding research into public attentiveness to major news stories, examines news interest as it relates to the news media’s coverage. The weekly survey is conducted in conjunction with The Project for Excellence in Journalism’s News Coverage Index, which monitors the news reported by major newspaper, television, radio and online news outlets on an ongoing basis. In the most recent week, data relating to news coverage were collected Jan. 16-22, and survey data measuring public interest in the top news stories of the week were collected Jan. 19-22 from a nationally representative sample of 1,002 adults.