Large majorities of the public know that Afghanistan and Pakistan share a border and can identify Hillary Clinton in a photograph as the nation’s secretary of state, according to the Pew Research Center’s latest News IQ survey, which for the first time includes visual questions. 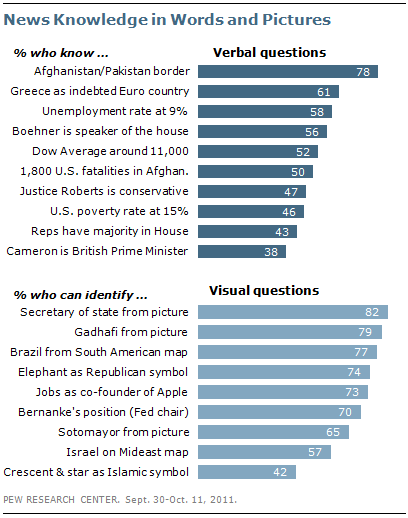 While majorities answer most of the 19 questions correctly, some prove more difficult. About four-in-ten, for example, know that Republicans now hold a majority only in the House of Representatives or can identify the crescent and star from four visual choices as the symbol associated with Islam.

The new survey includes a mixture of standard multiple-choice items as well as questions that use photographs, maps and symbols. It was conducted completely online Sept. 30-Oct. 11, 2011, among a random sample of 1,168 adults by the Pew Research Center for the People & the Press.

Of the 19 items on the survey, 10 are standard multiple-choice questions, many of which are similar or identical to those from previous political knowledge surveys. Of the other nine, five use pictures of public figures, two use maps and two use religious or political symbols. On average, quiz takers correctly answer 11.5 of the 19 items, for a score of 60% correct.

Seven of the 10 items with the most correct answers are visual questions. In addition to the large majority (82%) that correctly pick a photo of Hillary Clinton from four when asked which showed the current secretary of State, 79% select the name “Moammar Gadhafi” from a list of four when shown a photo of the former Libyan leader. On a map of South America with four nations numbered and highlighted, 77% correctly identify Brazil.

About as many (74%) correctly identify the Republican Party as the party associated with a symbol of an elephant. And 73% select a picture of Steve Jobs (from a set of four well-known technology executives) as the co-founder of Apple. Jobs died Oct. 5, while the online survey was being conducted.

Shown a picture of Ben Bernanke, 70% of those surveyed correctly select “chairman of the Federal Reserve” as his title. And 65% correctly choose U.S. Supreme Court Justice Sonia Sotomayor’s name from a list of four options when shown her picture.

One of the more difficult visual items is a question that asks respondents to identify Israel on a map of the Middle East region. Still, a majority (57%) is able to correctly pick Israel from a list of four countries in the region.

Of the items that do not include pictures, maps or symbols, the highest percentage correct is for a question about whether Afghanistan and Pakistan share a border (78% correctly say they do). Six-in-ten (61%) could pick Greece from a list when asked what European country is facing severe debt problems and possible default. About as many (58%) could correctly identify the current unemployment rate in the United States as approximately 9% (from a list of four choices). 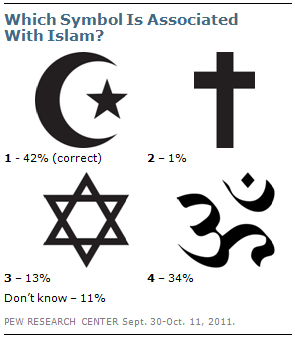 Majorities answered each of the visual questions correctly – except for the one that asked which of four symbols is associated with Islam. Just 42% correctly identify this symbol (answer #1 in the accompanying graphic). Perhaps because it may have reminded some people of Arabic characters, 34% incorrectly select symbol #4, which is Om, the symbol associated with Hinduism. The Star of David (Judaism) and the cross (Christianity) are chosen less frequently.

In a traditional text-only question, fewer than half (43%) know that the Republican Party holds a majority only in the House of Representatives. About

one-fifth (21%) say that the GOP holds a majority in both houses; 15% say Republicans control only the Senate, 10% say they control neither chamber and 11% offer no response. Comparable percentages (46%) could identify the official poverty rate in the United States, and 47% know that Supreme Court Chief Justice John Roberts is generally considered a conservative.

While nearly half could identify the poverty rate as reported by the federal government as closer to 15%, more than a third (36%) chose the highest option – 30%. Just 10% selected the lower figures of 5% or 1%. 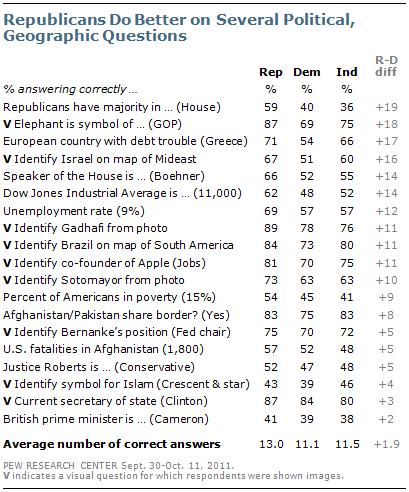 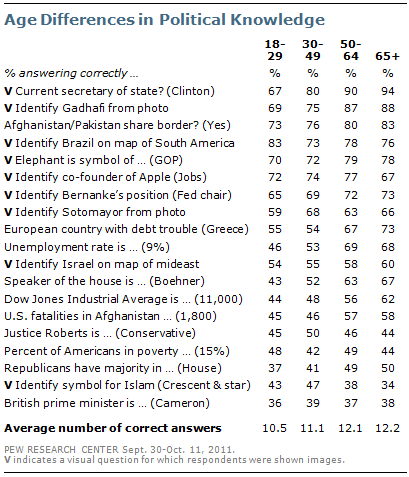 In past knowledge surveys, young people consistently answered fewer questions correctly than those in older age groups. That pattern holds in the current survey, but is less pronounced. On several questions, young people perform as well or better than older people.

Those ages 18 to 29 are much less likely than older people to correctly answer questions on topics such as the current secretary of state, the current unemployment rate and the number of U.S. fatalities in Afghanistan. Overall, those younger than 30 correctly answer about one question fewer (out of 19) than do those in older age groups. 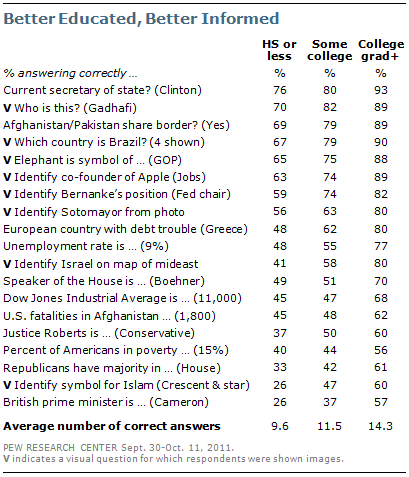 As in the past, those with more education are much more likely than those with less education to answer the knowledge questions correctly. In the current survey, the most striking differences come on a number of international questions.

Eight-in-ten of those with at least a college degree (80%) could identify the country of Israel on a regional map. This compares with just 41% of those with no college experience – a 39-point gap. Similarly, those with a college degree were at least 30 points more likely than those with no college experience to correctly answer questions on non-domestic topics such as the symbol for Islam (crescent and star), the European country facing severe debt problems and possible default (Greece), and the prime minister of Great Britain (Cameron).

What the Public Knows - In Words and Pictures
OverviewIslamic Crescent and Star Not Widely KnownPartisan Differences in KnowledgeFewer Young People Identify Clinton, Know Jobless RateWide Educational Divide
About the Survey