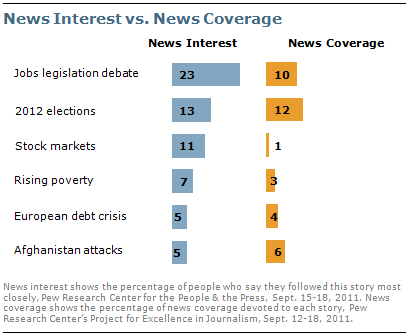 Amid continued worries about the health of the nation’s economy and persistent unemployment, the debate in Washington over President Obama’s jobs legislation topped the public’s news interest last week.

Nearly a quarter of the public (23%) says they followed the back and forth over Obama’s proposal more closely than any other news last week, according to the latest News Interest Index survey, conducted Sept. 15-18 among 1,006 adults by the Pew Research Center for the People & the Press. Other economic stories also drew the public’s interest: 11% say their top story was the recent ups and downs in the stock markets and 7% say they followed news about new government poverty figures most closely. Another 5% cite the debt crisis in Greece and other European countries as their top story.

Combining several separate story lines, news about the U.S. economy also topped coverage, making up 20% of the newshole altogether, according to a separate analysis by the Pew Research Center’s Project for Excellence in Journalism. About half of that – 10% of total coverage – dealt with the debate over Obama’s jobs plan and alternative ideas offered by Republicans. News about the economy’s impact on Americans – mostly tied to the government report that said 46 million Americans now live in poverty – accounted for 3% of coverage. News about the stock market swings accounted for another 1%, while other economic news made up another 6%. Separately, the debt crisis in Europe accounted for 4% of overall coverage.

With economic policies expected to play a critical role in next year’s elections, Americans also closely followed news about the 2012 presidential candidates; 13% say this was the news they followed most closely. News about the campaign – highlighted by the skirmishing among Republican candidates – accounted for 12% of coverage. 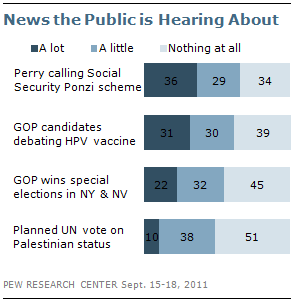 The number following the debate in Washington is comparable to the 28% that said they followed Obama’s speech about jobs to a joint session of Congress one week earlier.
Three-in-ten women (31%) say they followed the news about poverty numbers very closely, compared with 24% of men. Democrats and Republicans express similar interest in this story (34% and 28% very closely, respectively). 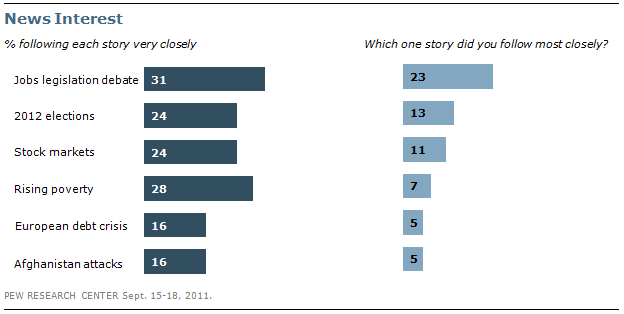 About a quarter of Americans say they followed news about the 2012 candidates or the fluctuations in the stock market very closely (24% each). Partisans express comparable levels of interest in both stories. Interest in election news has been relatively steady since late August.

Fewer than two-in-ten (16%) each say they followed news about the European debt crisis or last week’s attack on the U.S. Embassy in Afghanistan very closely. News out of Afghanistan accounted for 6% of coverage.

These findings are based on the most recent installment of the weekly News Interest Index, an ongoing project of the Pew Research Center for the People & the Press. The index, building on the Center’s longstanding research into public attentiveness to major news stories, examines news interest as it relates to the news media’s coverage. The weekly survey is conducted in conjunction with The Project for Excellence in Journalism’s News Coverage Index, which monitors the news reported by major newspaper, television, radio and online news outlets on an ongoing basis. In the most recent week, data relating to news coverage were collected Sept. 12-18, and survey data measuring public interest in the top news stories of the week were collected Sept. 15-18 from a nationally representative sample of 1,006 adults.