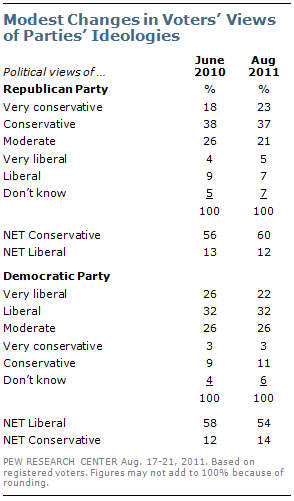 Though voters’ views of the ideologies of the political parties have shifted little since the summer of 2010, an increasing number see the Republican Party as very conservative, while slightly fewer see the Democratic Party as very liberal.

This trend notwithstanding, many Republicans’ own ideological assessments fall to the right of the assessments they give to the GOP. Nearly four-in-ten (38%) Republican voters rate own ideology as more conservative than their impression of the Republican Party’s ideology.

The latest survey by the Pew Research Center for the People & the Press, conducted Aug. 17-21 among 1,509 adults (1,205 registered voters), finds that voters’ descriptions of their own political views also are little changed. Roughly four-in-ten (41%) say they are either very conservative (8%) or conservative (33%), while about half as many (19%) say they are either very liberal (5%) or liberal (14%); another 38% describe themselves as moderate. 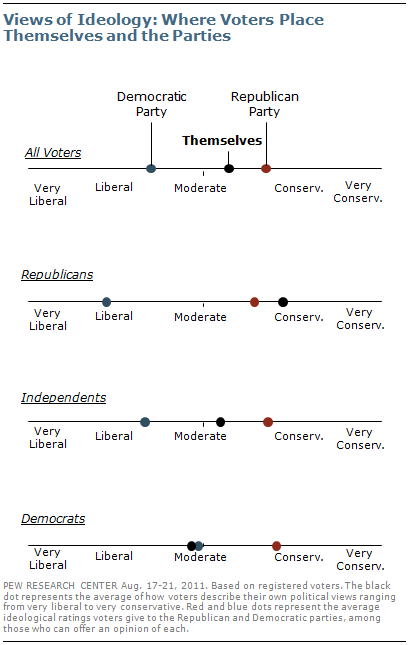 Looking at the ideological perceptions of the parties and voters’ descriptions of themselves, voters on average place themselves just right of center and slightly closer to the Republican Party than to the Democratic Party.

Republican voters see themselves as somewhat more conservative than they see their party – and they see the Democrats as solidly liberal. These perceptions are amplified among Republicans and Republican-leaning independents who agree with the Tea Party.

Democrats, by contrast, view their party’s political views as moderate. On average, Democrats’ own ideological assessments place them close to the middle of the political spectrum.

Partisans Rate Their Own Ideology 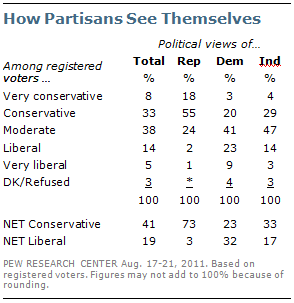 Many Republicans Place GOP to the Left of Their Own Views 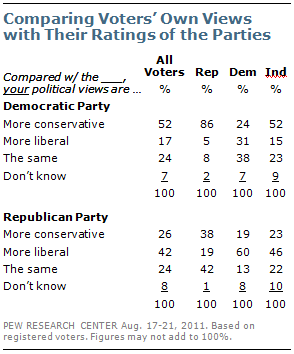 As in June 2010, about half of registered voters (52%) rate their own political views as more conservative than the rating they give the Democratic Party. Fewer voters (42%) see their own ideology as more liberal than the Republican Party’s.

Among Republicans and Republican-leaning voters who agree with the Tea Party, half (50%) place the GOP’s political views to the left of their own. Just 11% see the GOP as more conservative while 37% view the Republican Party’s views as similar to their own. By contrast, just 23% of Republicans and Republican leaners who do not agree with the Tea Party rate the GOP’s ideology as more liberal than their own, while 42% say the party’s views are about the same as their own and 33% see the GOP’s ideology as more conservative than their own.