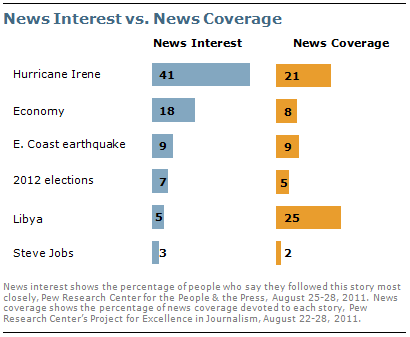 Hurricane Irene was the public’s top news story last week in a busy seven days that included an unusual and widely-felt East Coast earthquake and major developments in Libya.

About four-in-ten (41%) say that Irene was the news story they followed most closely last week, according to the latest weekly News Interest Index survey, conducted Aug. 25-28 among 1,010 adults by the Pew Research Center for the People & the Press. The hurricane made landfall in North Carolina on Saturday while the survey was in the field. Nearly two-in-ten (18%) say they followed news about the nation’s struggling economy most closely, while 9% say their top story was the Virginia earthquake that rattled nerves across much of the East Coast.

With such big stories on the domestic front, the dramatic events in Libya garnered less public attention. Early in the week, the media heavily covered the advance by rebel forces into Tripoli and the taking of Moammar Gadhafi’s compound. Just 5% of the public says this was the news they followed most closely. And only one-in-five (22%) say they paid very close attention to developments there.

For the full week, developments in Libya – including the apparent disappearance of Gadhafi – accounted for 25% of coverage, while Hurricane Irene made up 21%, according to a separate analysis by the Pew Research Center’s Project for Excellence in Journalism (PEJ). The hurricane, though, proved to be the top story for the week on network news (33%) and cable television (30%).

At week’s end, Irene dominated coverage. For example, the hurricane accounted for 52% of the overall newshole on Friday amid reports about the storm’s projected path and preparations from the Carolinas to New England. On cable television, Irene news made up 89% of the coverage measured that day; on network news broadcasts, it accounted for 74% of coverage. 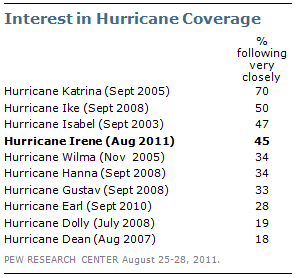 Hurricane Irene drew a large news audience with 45% of the public saying they followed coverage of the huge storm very closely. Interest in news about the hurricane is comparable with interest in Hurricane Isabel, which followed a similar path up the East Coast in 2003 (47% followed Isabel very closely).

Interest in Irene, which experts feared could cause major damage in New York City and other heavily populated areas, proved greater than interest in Hurricane Earl a year ago (28% very closely).

Women also followed news about the East Coast earthquake, which measured a magnitude of 5.8 on the Richter scale, more closely than men. Overall, about a third (32%) say they very closed followed news about the earthquake, which caused relatively minor damage. Nearly four-in-ten (38%) women say they followed this news very closely, compared with 25% of men.

Just more than two-in-ten (22% each) say they very closely followed news about the ongoing conflict in Libya or the 2012 elections; 7% say news about the candidates for the 2012 presidential election was their top story, while 5% say this about Libya.

Interest in developments in Libya is higher than in recent weeks, but still well below the levels measured in late March when the U.S. and allies began military air strikes there to aid the rebel forces (37% very closely).

Interest in the election was down slightly from one week earlier, when 27% said they were following this news very closely. Republicans and Democrats have shown comparable levels of interest in election news in recent weeks, but that was not the case last week. More than a third of Republicans (35%) say they followed election news very closely last week, compared with 21% of Democrats and 19% of independents.

About one-in-ten (12%) say they very closely followed news about Steve Jobs announcing he is stepping down as Apple’s chief executive officer; 3% say this was the news they followed most closely. The Apple developments accounted for 2% of the newshole measured by PEJ. 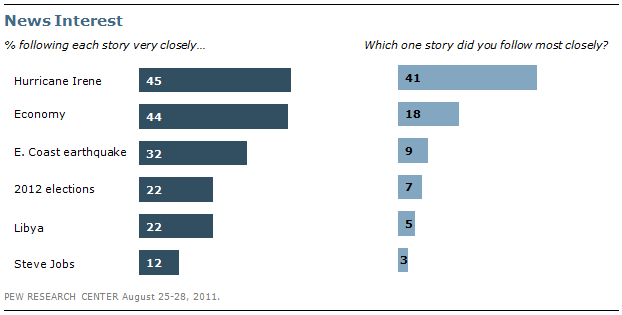 These findings are based on the most recent installment of the weekly News Interest Index, an ongoing project of the Pew Research Center for the People & the Press. The index, building on the Center’s longstanding research into public attentiveness to major news stories, examines news interest as it relates to the news media’s coverage. The weekly survey is conducted in conjunction with The Project for Excellence in Journalism’s News Coverage Index, which monitors the news reported by major newspaper, television, radio and online news outlets on an ongoing basis. In the most recent week, data relating to news coverage were collected August 22-28, and survey data measuring public interest in the top news stories of the week were collected August 25-28 from a nationally representative sample of 1,010 adults.