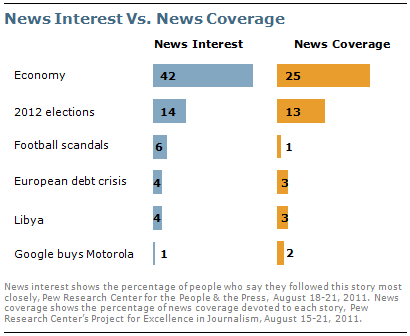 Americans focused most closely last week on news about the nation’s troubled economy amid concerns about the stalled recovery and fears of a possible new recession.

About four-in-ten (42%) say they followed reports about the condition of the U.S. economy more closely than any other news. That is three times the number saying their top story was news about the candidates for the 2012 presidential election (14%), according to the latest weekly News Interest Index survey, conducted Aug. 18-21 among 1,007 adults by the Pew Research Center for the People & the Press.

Economic news topped coverage as well, accounting for a quarter of the newshole (25%), according to a separate analysis by the Pew Research Center’s Project for Excellence in Journalism (PEJ). News about the 2012 elections made up 13% of all news coverage.

Economic story lines top the public’s news interest. At the same time, the debate over what the federal government can or should do to help the economy has become a key issue in the 2012 race for the White House. 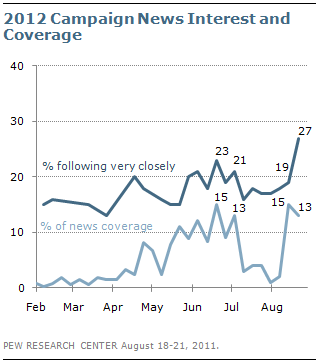 More than a quarter (27%) say they very closely followed news about candidates for the 2012 presidential elections, up from 19% the previous week and a high point for the year so far. With Texas Gov. Rick Perry stepping up his campaign for the GOP nomination and President Obama making a campaign-style bus trip, election news made up 13% of coverage, which was little changed from 15% the previous week, when Michele Bachmann won the Republican straw poll in Iowa and Perry officially entered the race.

Coverage and interest have both increased since early August. And, as the economic news has worsened, the GOP contenders have focused their criticism on Obama’s efforts to improve the situation. Perry made news last week with blunt criticism of Federal Reserve Chairman Ben S. Bernanke.

One-in-ten (10%) say they followed news about recent scandals in college football very closely, while 6% say this was their top story for the week. The stories focused primarily on alleged NCAA rule violations at the University of Miami. News about the scandals accounted for just 1% of the coverage measured by PEJ.

Though the conflict in Libya appears to be reaching a critical point, the situation there attracted modest interest last week. Just 14% say they followed news about events in Libya very closely, matching the number that said this in early June, while 4% say this was the news they followed most closely. But the survey was largely completed before rebel forces made their way into Tripoli on Sunday and Moammar Gadhafi’s hold on power appeared to be slipping.

For the full week, reporting about Libya made up 3% of coverage. In total, news about the conflicts in the Middle East and North Africa accounted for 10% of coverage. Coverage and interest are likely to grow this week as Gadhafi’s fate becomes more clear. 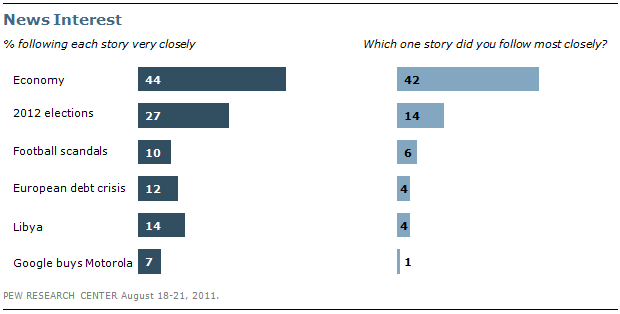 The public paid little attention to news about Google, the internet giant, purchasing mobile phone maker Motorola Mobility. Just 7% say they followed this business story very closely; 1% say this was the news they followed most closely. The Google-Motorola story made up 2% of the coverage measured by PEJ.

These findings are based on the most recent installment of the weekly News Interest Index, an ongoing project of the Pew Research Center for the People & the Press. The index, building on the Center’s longstanding research into public attentiveness to major news stories, examines news interest as it relates to the news media’s coverage. The weekly survey is conducted in conjunction with The Project for Excellence in Journalism’s News Coverage Index, which monitors the news reported by major newspaper, television, radio and online news outlets on an ongoing basis. In the most recent week, data relating to news coverage were collected August 15-21, and survey data measuring public interest in the top news stories of the week were collected August 18-21 from a nationally representative sample of 1,007 adults.

Next:  About the News Interest Index
← Prev Page
You are reading page1Page2
Next Page →