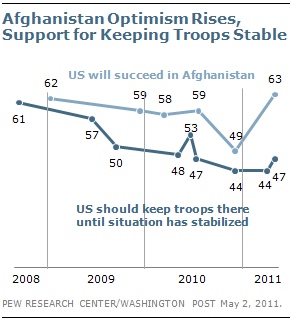 The killing of Osama bin Laden has bolstered the public’s confidence on two fronts: that the government can prevent a possible terrorist attack, and that the U.S. will succeed in achieving its goals in Afghanistan.

However, the public’s basic views about U.S. forces in Afghanistan and the threat of terrorism in the United States have not fundamentally changed. The public remains divided over whether the U.S. should keep troops in Afghanistan until the situation has stabilized or should remove the troops as soon as possible. 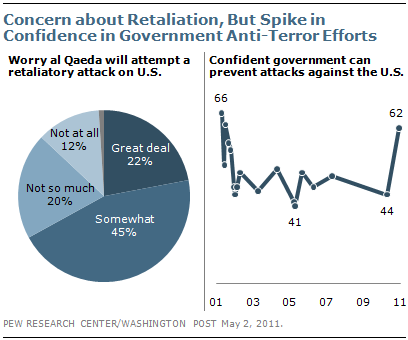 And just 5% of Americans believe that the death of Osama bin Laden means the terrorism threat is mostly over – 85% say the U.S. will need to take further military actions to reduce the threat of terrorism to the United States.

An overnight survey of 654 adults, conducted by the Pew Research Center for the People & the Press and The Washington Post finds broad concern about the possibility that al Qaeda may attempt a major retaliatory attack against the U.S. Two-thirds say they are at least somewhat concerned al Qaeda will attempt a major attack against the United States as retaliation for bin Laden’s death, though just 22% say they have a great deal of concern about this.

While Pakistan’s role in the effort to find bin Laden has drawn criticism, a majority (54%) of Americans say they do not know enough to express an opinion about whether Pakistan helped or hurt in this effort. However, many more say Pakistan mostly hurt (34%) rather than mostly helped (8%) U.S. efforts to find bin Laden. 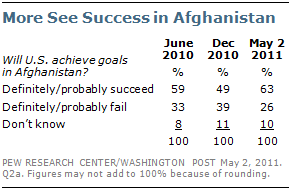 There has been a rise in overall optimism about the war in Afghanistan – 63% now say the United States will definitely or probably succeed in achieving its goals, up from 49% last December. Just 26% say the Afghanistan effort will probably or definitely fail, down from 39%.

This rise in optimism crosses party lines: About two-thirds of Republicans (69%) and Democrats (67%) now say the U.S. will succeed in Afghanistan, both significantly higher than in December (54% and 49%, respectively). A majority of independents (58%) also say the country will succeed (up from 48%). 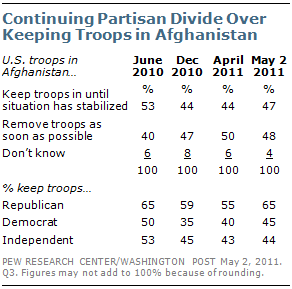 While the public is more optimistic about success, there is little change in opinion about maintaining U.S. troops in Afghanistan. The public remains divided over whether the U.S. should keep troops in Afghanistan until the situation has stabilized (47%) or remove troops as soon as possible (48%), virtually unchanged from a month ago (44% keep troops, 50% remove troops). 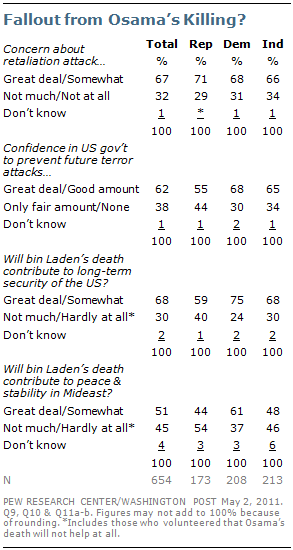 Two-thirds of Americans say they worry a great deal (22%) or a fair amount (45%) that al Qaeda will attempt a major terrorist attack against the United States as a retaliation for bin Laden’s death. Most Republicans (71%), Democrats (68%) and independents (66%) say they are at least somewhat worried about a retaliatory attack.

Confidence has increased across partisan lines. Currently, more than half of Democrats (68%), independents (65%) and Republicans (55%) express confidence in the government’s ability to prevent future attacks.

Opinion is more divided about the effect of bin Laden’s death on peace and stability in the Middle East – 51% say his death will help a great deal or somewhat while 45% say it will not help much at all. A majority of Democrats (61%) say bin Laden’s death will contribute at least somewhat to peace and stability in the Middle East while Republicans and independents express more mixed views. 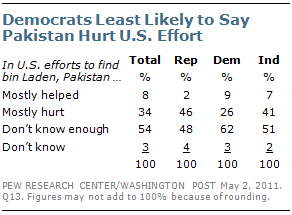 More Optimism about Afghanistan, But No Boost in Support for Troop Presence
OverviewImplications for AfghanistanTerrorism Concerns PersistSkepticism about Pakistan’s Role
About the Survey