The public has expressed modest interest in the run-up to the royal wedding. And while news coverage of the royal wedding is now ramping up, nearly two-thirds of the public (64%) say they think it has gotten too much coverage.

Just 8% say they followed news about the upcoming wedding of England’s Prince William and fiancee Kate Middleton very closely last week. Another 13% say they followed this news fairly closely. Still, more than half (53%) say they did not follow this news at all closely, according to the latest News Interest Index survey conducted April 21-25 among 1,001 adults.

A separate content analysis by the Pew Research Center’s Project for Excellence in Journalism (PEJ) finds that last week’s coverage of the wedding, which is expected to increase, accounted for 3% of the newshole. The numbers were higher for two specific sectors: newspapers and network news (6% each).

No story dominated coverage, according to PEJ. News about the situation in Libya made up 11% of coverage. The debate over the federal deficit and the national debt accounted for 8%, as did the slow-starting 2012 presidential race. 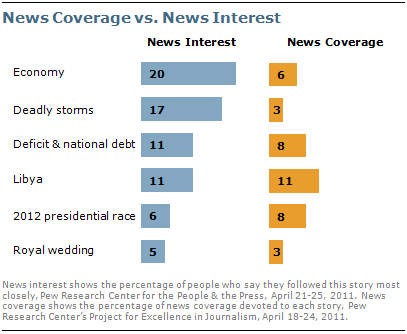 For much of 2011 so far, major breaking news stories – foreign and domestic – have dominated both coverage and interest. Without such a story last week, the public focused on the latest twists and turns in the economic recovery.

About three-in-ten (29%) say they very closely followed news about deadly storms in the South and the Midwest last week. This was the top story for 17% and accounted for 3% of the coverage analyzed by PEJ.

Three-in-ten (30%) say they very closely followed news about discussions in Washington about how to address the federal budget deficit and the national debt. Partisans were about equally likely to say they followed this story very closely. About one-in-ten (11%) say this was the news they followed most closely; the deficit debate accounted for 8% of coverage.

About two-in-ten (21%) say they very closely followed news about the current situation and events in Libya, matching the number that said this one week earlier. About one-in-ten (11%) say this was the news they followed most closely. News about Libya made up 11% of the newshole, while news about unrest in the region more generally – not including the situation in Libya – accounted for another 4% of coverage.

About two-in-ten (18%) say they very closely followed news about possible candidates for the 2012 presidential election. That’s about the same level of interest as the previous week. Just 6% say this was the news they followed most closely. News about the campaign made up 8% of coverage, more than doubling its previous high this year, according to PEJ.

Though the numbers are not large, women are much more likely than men to say they followed news about the royal wedding very closely (12% vs. 4%); 15% of women 50 and older say this, as well as 8% of women younger than 50.

Too Much Wedding Coverage Seen

While nearly two-thirds of the public say news organizations are giving too much coverage to the royal wedding (64%), majorities say the media is giving the right amount to two other international stories: the aftermath of the disasters in Japan (58%) and the situation in Libya (55%).

While they differ in their interest in the story, men and women both say the wedding of Prince William and Kate Middleton is getting too much coverage; 66% of men and 63% of women say this. 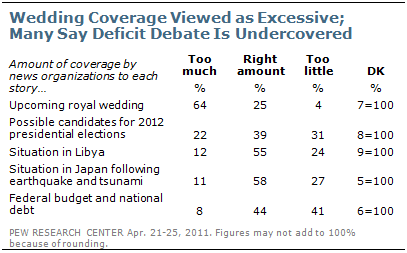 In October 1981, several months after the July wedding of William’s parents – Prince Charles and Lady Diana – an ABC News poll asked a slightly different question about a series of recent big events. The survey found that 61% of Americans thought that television news had given too much attention to that royal wedding, while 34% said the media had given the wedding the right amount of attention. Another 2% said the wedding had not been given enough attention.

Looking at the other major foreign stories, about a quarter each say the media is giving too little attention to the situation in Japan (27%) or the situation in Libya (24%). About one-in-ten say news organizations are giving too much coverage to these stories (12% for Libya, 11% for Japan). 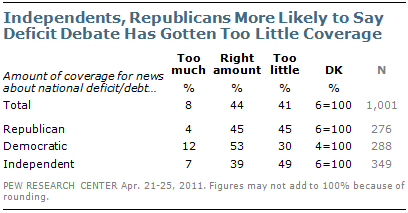 By contrast, nearly half of independents (49%) and 45% of Republicans say the debate over the nation’s deficit and debt has received too little coverage. That compares with just 30% of Democrats.

These findings are based on the most recent installment of the weekly News Interest Index, an ongoing project of the Pew Research Center for the People & the Press. The index, building on the Center’s longstanding research into public attentiveness to major news stories, examines news interest as it relates to the news media’s coverage. The weekly survey is conducted in conjunction with The Project for Excellence in Journalism’s News Coverage Index, which monitors the news reported by major newspaper, television, radio and online news outlets on an ongoing basis. In the most recent week, data relating to news coverage were collected April 18 to 24, and survey data measuring public interest in the top news stories of the week were collected April 21 to 25, from a nationally representative sample of 1,001 adults.