Roughly half (52%) of the public say they very closely followed news about the massive earthquake off the northeast coast of Japan and the tsunami that followed, according to the latest News Interest Index survey, conducted March 10-13 among 1,001 adults. The Japan disaster was by far the top story of the week – 46% say this was the news they followed most closely last week; no other story came close. 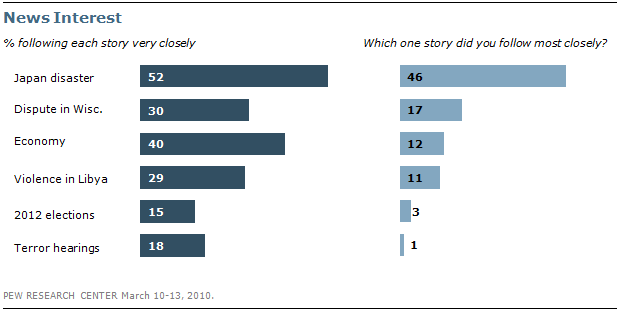 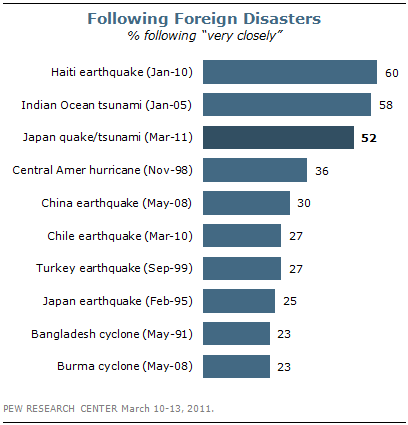 Still, the number who say they followed the Japanese catastrophe very closely is
somewhat less than the 60% that said they followed news that closely about the earthquake that devastated Haiti in January 2010. In January 2005, 58% said they very closely followed news about the major earthquake and tsunami that struck Indonesia, Sri Lanka and other south Asian nations. Later that year, more Americans paid very close attention to a disaster in this country – Hurricane Katrina – the week that hurricane hit the Gulf Coast (70% very closely).

For its part, the media devoted more than half (52%) of news coverage on Friday – the day the earthquake and tsunami hit – to the disaster in Japan, according to a separate analysis by the Pew Research Center’s Project for Excellence in Journalism (PEJ). For the full week, the late-breaking story accounted for 12% of coverage.

Prior to Friday, two ongoing stories – the fighting in Libya and the confrontation over public employee bargaining rights in Wisconsin – had dominated news coverage. By week’s end, news organizations had shifted focus to the devastation in Japan, rescue efforts and threat of a major nuclear accident at a heavily damaged nuclear power complex. Those story lines continue to drive extensive coverage this week.

Looking at the week’s other top stories, 30% say they very closely followed news about the disputes in Wisconsin and other states between state governments and public employee unions. Fully 17% say this was the news they followed most closely. News about the disputes, which reached a critical juncture last week when Wisconsin Republicans passed a measure scaling back public employee bargaining rights, accounted for 13% of the full week’s newshole, according to PEJ.

Four-in-ten (40%) say they very closely followed news about the condition of the U.S. economy. This was the top story for 12%. General economic news – apart from the state budget fights – accounted for 6% of coverage for the week.

About three-in-ten (29%) say they followed news about the violence in Libya very closely; 11% say this was the news they followed most closely. News about the fighting in Libya accounted for 19% of coverage, most of the 21% devoted to Middle East unrest more generally.

Nearly two-in-ten (18%) say they very closely tracked news about the contentious House hearing held last week on possible support for terrorism among Muslim Americans; 1% say this was the story they followed most closely. News about the hearing accounted for 5% of coverage last week. 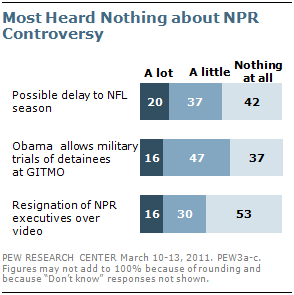 Most Americans say they heard at least a little last week about President Obama’s decision to allow military trials of detainees at the Guantanamo Bay prison (63%) and the possibility that the National Football League season will be delayed or cancelled because of a labor dispute (57%). Fewer say they heard about the resignation of NPR executives after the release of a video secretly made by conservative activists: 46% percent had heard at least a little about this, while a majority – 53% – had heard nothing at all.

Just 16% say they heard a lot about the NPR resignations, while 30% heard a little about this story. There were no partisan differences in how likely people were to have heard a
lot about the secretly-recorded NPR video. Democrats, however, were slightly more likely than Republicans to have heard nothing at all about this (58% versus 47%).

Another 16% say they heard a lot about President Obama’s decision to resume military trials at Guantanamo Bay. Almost half of the public (47%) say they had heard a little about this story, while 37% had heard nothing at all.

One-in-five (20%) say they heard a lot about a possible delay or cancellation of the upcoming NFL season because of a labor dispute; 37% had heard a little and 42% had heard nothing at all about this story.

These findings are based on the most recent installment of the weekly News Interest Index, an ongoing project of the Pew Research Center for the People & the Press. The index, building on the Center’s longstanding research into public attentiveness to major news stories, examines news interest as it relates to the news media’s coverage. The weekly survey is conducted in conjunction with The Project for Excellence in Journalism’s News Coverage Index, which monitors the news reported by major newspaper, television, radio and online news outlets on an ongoing basis. In the most recent week, data relating to news coverage were collected March 7-13, and survey data measuring public interest in the top news stories of the week were collected March 10-13, from a nationally representative sample of 1,001 adults.

The analysis in this report is based on telephone interviews conducted March 10-13, 2011 among a national sample of 1,001 adults 18 years of age or older living in the continental United States (670 respondents were interviewed on a landline telephone, and 331 were interviewed on a cell phone, including 154 who had no landline telephone). The survey was conducted by interviewers at Princeton Data Source under the direction of Princeton Survey Research Associates International. A combination of landline and cell phone random digit dial samples were used; both samples were provided by Survey Sampling International. Interviews were conducted in English. Respondents in the landline sample were selected by randomly asking for the youngest adult male or female who is now at home. Interviews in the cell sample were conducted with the person who answered the phone, if that person was an adult 18 years of age or older. For detailed information about our survey methodology, see: https://www.pewresearch.org/politics/methodology/detailed.