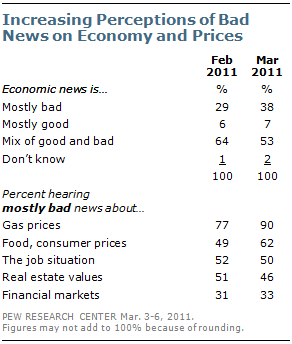 A growing awareness of bad news about gas prices has, at least for now, reversed Americans’ more positive perceptions of economic news in recent months.

Those surveyed after the release of the federal unemployment report were less negative about job news than those surveyed just before its release; 47% of those surveyed March 4-6 say they are hearing mostly bad news about the jobs situation, while 55% of those contacted on March 3 – the day before the report was released – say the same. Meanwhile, perceptions of news about the overall economy did not shift significantly over the course of the survey period.

News about the unrest in Libya – which has had a significant impact on oil prices – topped the public’s news interest last week; 23% say this was the news they followed more closely than any other story. Another 18% say they followed news about disputes between state governments and public employee unions most closely and 15% say they followed more general news about the economy that closely. Those same stories received the most coverage, according to a separate analysis by the Pew Research Center’s Project for Excellence in Journalism (PEJ). 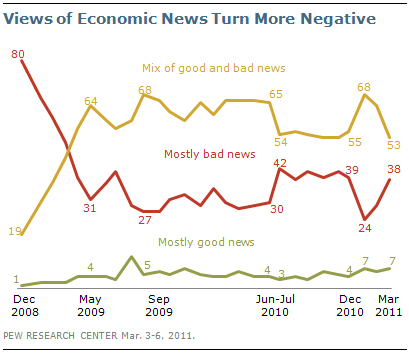 There also were comparable drops in those saying they are hearing a mix of good and bad news about the economy. Among Republicans, 50% now say this, down from 62% in February. Nearly six-in-ten Democrats (56%) agree, down from 69%, as well as 57% of independents, down from 67%.

The high percentages that say they are hearing mostly bad news about gas prices run across demographic and political groups. About nine-in-ten say this among Republicans (92%), Democrats (91%) and independents (89%). 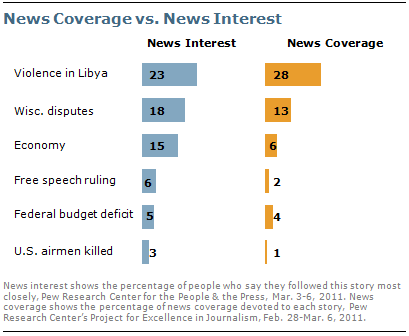 The public divided its attention last week between the ongoing violence in Libya and economic concerns at home. The latter includes various state budget battles and general economic news from around the nation. News coverage last week was largely in sync with the public’s interests.

More than two-in-ten Americans (23%) say they followed news about the events in Libya most closely, making this the public’s top story last week. Libya shared the top spot one week earlier with related news about the impact of Mid-East turmoil on domestic oil prices. About three-in-ten (31%) say they followed news about Libya very closely, down slightly from one week earlier (38%). Coverage of the situation in Libya accounted for 28% of the newshole, according to PEJ.

There is a significant age gap in attentiveness to this news. Among those 65 and older, 37% say they followed these stories very closely; few (12%) under 30 followed that closely. About half (51%) of young people did not follow this news at all closely.

News about U.S. economic conditions was the most closely followed story for 15% of the public. Coverage – highlighted by news about fuel prices and new federal unemployment data – accounted for 6% of the newshole. Close to four-in-ten (37%) followed economic news very closely, comparable to the levels of interest in early January and early February of this year, but down from the 49% that said they were following this news very closely one week earlier.

About one quarter (24%) say they very closely followed news about a Supreme Court decision that protects the free speech rights of protestors at military funerals. Interest was greater than in October, when 18% said they were very closely following the case about a Baptist Church that had organized anti-gay protests at the funerals of U.S. soldiers. The court’s ruling last week was the most closely followed story for 6% of the public and received 2% of coverage.

The debate in Washington over the federal budget deficit was the most closely followed story for 5%. Last week, budget news centered on Congress approving a plan to temporarily avoid a government shutdown. About a quarter (26%) say they followed this news very closely. News about the budget debate accounted for 4% of coverage. More Republicans (33%) say they followed the budget debate very closely than either Democrats or independents (24% each).

Reports that two U.S. airmen were shot and killed by a gunman outside the airport in Frankfurt, Germany was the most closely followed story for 3% of the public. Just 16% tracked this story very closely. This news accounted for about 1% of the newshole.

These findings are based on the most recent installment of the weekly News Interest Index, an ongoing project of the Pew Research Center for the People & the Press. The index, building on the Center’s longstanding research into public attentiveness to major news stories, examines news interest as it relates to the news media’s coverage. The weekly survey is conducted in conjunction with The Project for Excellence in Journalism’s News Coverage Index, which monitors the news reported by major newspaper, television, radio and online news outlets on an ongoing basis. In the most recent week, data relating to news coverage were collected February 28-March 6, and survey data measuring public interest in the top news stories of the week were collected March 3-6, from a nationally representative sample of 1,006 adults.

The analysis in this report is based on telephone interviews conducted March 3-6, 2011 among a national sample of 1,006 adults 18 years of age or older living in the continental United States (674 respondents were interviewed on a landline telephone, and 332 were interviewed on a cell phone, including 144 who had no landline telephone). The survey was conducted by interviewers at Princeton Data Source under the direction of Princeton Survey Research Associates International. A combination of landline and cell phone random digit dial samples were used; both samples were provided by Survey Sampling International. Interviews were conducted in English. Respondents in the landline sample were selected by randomly asking for the youngest adult male or female who is now at home. Interviews in the cell sample were conducted with the person who answered the phone, if that person was an adult 18 years of age or older. For detailed information about our survey methodology, see: https://www.pewresearch.org/politics/methodology/detailed.