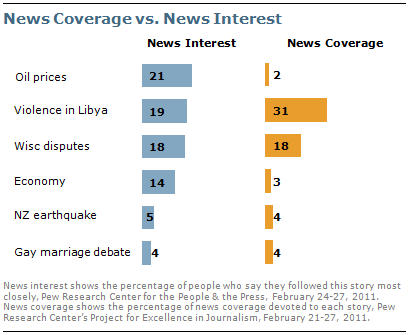 Both the public and the media focused last week on the increasing violence in Libya, but Americans also closely tracked news about a related concern – the impact the crisis in the Middle East is having on oil prices at home.

About two-in-ten (21%) say they followed news about the rising price of oil more closely than any other major story, according to the latest News Interest Index survey conducted Feb. 24-27 among 1,009 adults. Comparable numbers say they most closely followed news about the situation in Libya (19%) or the budget disputes in Wisconsin and other states between state governments and public employee unions (18%).

News about Libya topped coverage, accounting for 31% of the newshole, according to a separate analysis by the Pew Research Center’s Project for Excellence in Journalism (PEJ). News about the budget standoffs in Wisconsin and other states made up 18% of coverage. News about oil prices, on the other hand, was limited, accounting for just 2% of the coverage measured by PEJ.

The public is typically very attentive to news about fluctuating gas and oil prices. The sharp run-up in gas prices following Hurricane Katrina was among the most closely followed stories of the previous decade, as was news about the falling price of gas in the fall of 2008. (See “Public’s Top Stories of the Decade – 9/11 and Katrina,” Dec. 30, 2010).

Income a Factor in Interest in Oil Price News

There are only slight differences in interest in these stories in most demographic groups and among partisans. Those with household incomes of less than $30,000 are more likely than those with incomes of $75,000 or more to say they followed news about oil prices more closely than any other news (26% vs. 17%). Oil prices were clearly the top story for those earning less than $30,000, while affluent households also paid considerable attention to the situation in Libya (22% most closely) and the ongoing fight in Wisconsin (21%).

Not surprisingly, people in the Midwest are more likely to say they followed the disputes in Wisconsin and other states most closely. Nearly three-in-ten (28%) say this, compared to 16% for those in Northeast and South and 11% for those in the West.

Most Aware of Somali Pirates and Possibility of Gov’t Shutdown 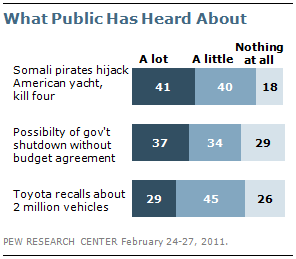 About seven-in-ten (71%) say they heard at least a little about the possibility that the federal government could soon shut down if Republicans in Congress and the Obama Administration fail to agree on a budget. Nearly four-in-ten (37%) say they heard a lot about this, while 33% say they heard a little. That’s up from one week earlier when 21% said they had heard a lot about a possible shutdown and 35% said they had heard a little. If the government were to shut down, Americans are just as likely to blame the Obama administration as Republicans in Congress. ( See “More Side with Wisconsin Unions than Governor,” Feb. 28, 2011.)

These findings are based on the most recent installment of the weekly News Interest Index, an ongoing project of the Pew Research Center for the People & the Press. The index, building on the Center’s longstanding research into public attentiveness to major news stories, examines news interest as it relates to the news media’s coverage. The weekly survey is conducted in conjunction with The Project for Excellence in Journalism’s News Coverage Index, which monitors the news reported by major newspaper, television, radio and online news outlets on an ongoing basis. In the most recent week, data relating to news coverage were collected February 21-27, and survey data measuring public interest in the top news stories of the week were collected February 24-27, from a nationally representative sample of 1,009 adults.

The analysis in this report is based on telephone interviews conducted February 24-27, 2011 among a national sample of 1,009 adults 18 years of age or older living in the continental United States (678 respondents were interviewed on a landline telephone, and 331 were interviewed on a cell phone, including 144 who had no landline telephone). The survey was conducted by interviewers at Princeton Data Source under the direction of Princeton Survey Research Associates International. A combination of landline and cell phone random digit dial samples were used; both samples were provided by Survey Sampling International. Interviews were conducted in English. Respondents in the landline sample were selected by randomly asking for the youngest adult male or female who is now at home. Interviews in the cell sample were conducted with the person who answered the phone, if that person was an adult 18 years of age or older. For detailed information about our survey methodology, see: https://www.pewresearch.org/politics/methodology/detailed.