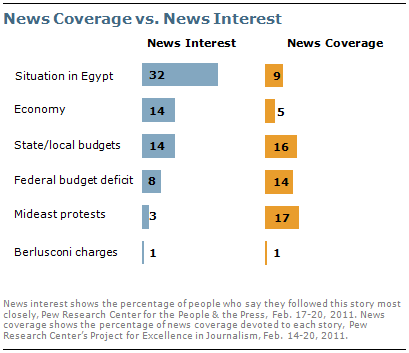 The public’s interest in developments in Egypt remained high last week as the media focused increasingly on domestic debates over how to deal with the fiscal troubles facing many states and how to bring down the federal deficit.

About a third of the public (32%) says they followed news about the situation in Egypt more closely than any other news story last week. That is down from 48% one week earlier, but still ranks – by a wide margin – as the public’s top story for the week, according to the latest News Interest Index survey conducted Feb. 17-20 among 1,001 adults. And, as unrest grew in nations like Libya and Bahrain, another 3% say they followed news about anti-government protests elsewhere in the region most closely.

But the public also kept a close watch on several economic story lines. Fully 14% say news about the economy was their top story of the week. Another 14% say they most closely followed news about state and local budget problems and 8% say they followed discussions in Washington about how to address the federal budget deficit this closely.

Together, the economic themes topped coverage last week, making up a total of 35% of the newshole examined by the Pew Research Center’s Project for Excellence in Journalism (PEJ). Coverage of state budget problems, most notably the noisy confrontations in Wisconsin over the governor’s push to curtail collective bargaining rights for public employees, accounted for 16%, while the debate in Washington over the federal budget accounted for 14%. More general news about the economy totaled 5% of coverage.

Meanwhile, coverage of unrest in the Middle East and northern Africa (including Egypt) fell to 26% of the newshole; 9% focused on Egypt and 17% dealt with protests in other nations, including Iran. One week before that, unrest in the region accounted for 40% of coverage, with most focused on Egypt. The week of Jan. 31-Feb. 6, coverage of the crisis in the Middle East made up 56% of the newshole, the highest level for an international story since PEJ started its weekly analysis four years ago. 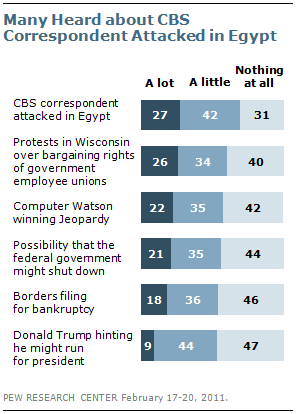 In early December, immediately after the president’s deficit commission released its recommendations, 35% said they were following news about the federal deficit very closely. At that point, partisans showed comparable levels of interest (36% for Democrats, 36% for Republicans and 34% for independents). In the current survey, there is little change among Republicans or independents (32% each), while the number of Democrats following this news very closely has dropped to 23%. 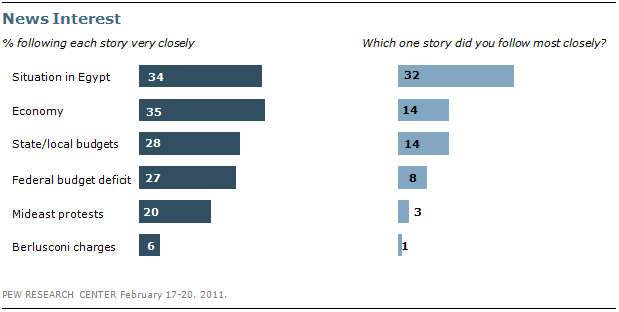 Just 6% say they very closely followed news about Italian Prime Minister Silvio Berlusconi facing charges for allegedly paying for sex with a 17-year-old girl; 1% say this was the story they followed most closely. News about Berlusconi’s legal troubles made up 1% of coverage.

These findings are based on the most recent installment of the weekly News Interest Index, an ongoing project of the Pew Research Center for the People & the Press. The index, building on the Center’s longstanding research into public attentiveness to major news stories, examines news interest as it relates to the news media’s coverage. The weekly survey is conducted in conjunction with The Project for Excellence in Journalism’s News Coverage Index, which monitors the news reported by major newspaper, television, radio and online news outlets on an ongoing basis. In the most recent week, data relating to news coverage were collected February 14-20, and survey data measuring public interest in the top news stories of the week were collected February 17-20, from a nationally representative sample of 1,001 adults.

The analysis in this report is based on telephone interviews conducted February 17-20, 2011 among a national sample of 1,001 adults 18 years of age or older living in the continental United States (670 respondents were interviewed on a landline telephone, and 331 were interviewed on a cell phone, including 137 who had no landline telephone). The survey was conducted by interviewers at Princeton Data Source under the direction of Princeton Survey Research Associates International. A combination of landline and cell phone random digit dial samples were used; both samples were provided by Survey Sampling International. Interviews were conducted in English. Respondents in the landline sample were selected by randomly asking for the youngest adult male or female who is now at home. Interviews in the cell sample were conducted with the person who answered the phone, if that person was an adult 18 years of age or older. For detailed information about our survey methodology, see: https://www.pewresearch.org/politics/methodology/detailed.