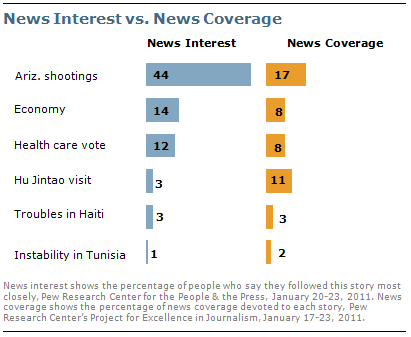 The public continued to show strong interest last week in news about the shooting rampage in Tucson, Ariz., though the story did not dominate media coverage as it had one week earlier.

More than four-in-ten Americans (44%) say they followed news about the aftermath of the Jan. 8 shootings more closely than any other news last week, according to the latest News Interest Index survey conducted Jan. 20-23 among 1,001 adults. One week earlier, 49% said this was the news they followed most closely.

News about the shootings and what followed them – with a strong focus on Rep. Gabrielle Giffords’ recovery and debate over angry political rhetoric in the United States – accounted for 17% of coverage last week, according to a separate analysis by the Pew Research Center’s Project for Excellence in Journalism (PEJ). The story accounted for 57% of the newshole in the week immediately after the shootings.

Among the other top stories for the public – both well behind the Arizona rampage – were news about the economy (14% most closely) and news about Republican efforts to repeal the health care law enacted in 2010 (12% most closely). These stories each accounted for 8% of coverage.

Partisan Differences Over the Week’s News

There also is a gender gap in attentiveness to news about the Arizona shootings: 53% of women say it was the story they followed most closely, compared with 36% of men. 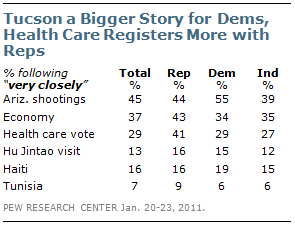 Other stories garnered relatively low interest, including the visit to the U.S. by Chinese President Hu Jintao, news about political instability and earthquake recovery in Haiti and news about instability in Tunisia following the government’s collapse there.

Just more than one-in-ten (13%) say they followed news about the Chinese leader’s visit very closely, while 3% say this was the news they followed most closely. There are no significant differences in interest among partisans.

Many Have Heard About Steve Jobs’ Medical Leave 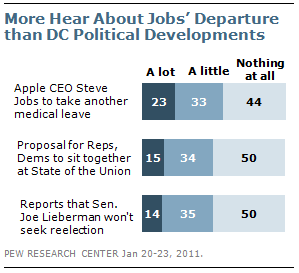 About half (49% each) say they heard at least a little about a proposal that Republicans and Democrats sit together at President Obama’s Jan. 25 State of the Union address or about Sen. Joe Lieberman’s announcement that he would not seek reelection in 2012.

Looking at Lieberman’s retirement plans, 14% say they heard a lot about the Connecticut independent’s announcement while 35% heard a little. Again, 50% say they heard nothing at all about this. There are no significant differences among partisans.

These findings are based on the most recent installment of the weekly News Interest Index, an ongoing project of the Pew Research Center for the People & the Press. The index, building on the Center’s longstanding research into public attentiveness to major news stories, examines news interest as it relates to the news media’s coverage. The weekly survey is conducted in conjunction with The Project for Excellence in Journalism’s News Coverage Index, which monitors the news reported by major newspaper, television, radio and online news outlets on an ongoing basis. In the most recent week, data relating to news coverage were collected January 17-23, and survey data measuring public interest in the top news stories of the week were collected January 20-23, from a nationally representative sample of 1,001 adults.

The analysis in this report is based on telephone interviews conducted January 20-23, 2011 among a national sample of 1,001 adults 18 years of age or older living in the continental United States (671 respondents were interviewed on a landline telephone, and 330 were interviewed on a cell phone, including 135 who had no landline telephone). The survey was conducted by interviewers at Princeton Data Source under the direction of Princeton Survey Research Associates International. A combination of landline and cell phone random digit dial samples were used; both samples were provided by Survey Sampling International. Interviews were conducted in English. Respondents in the landline sample were selected by randomly asking for the youngest adult male or female who is now at home. Interviews in the cell sample were conducted with the person who answered the phone, if that person was an adult 18 years of age or older. For detailed information about our survey methodology, see: https://www.pewresearch.org/politics/methodology/.