The past year has seen a series of momentous political events – rising unemployment, passage of controversial health care legislation, a sweeping defeat for Democrats in the midterm elections and a historically active lame-duck session of Congress. But the public’s impression of Barack Obama has remained remarkably steady. At the start of 2010, 49% of Americans approved of Obama’s job performance, while 42% disapproved. At the start of 2011, these figures are hardly changed: 46% approve, 44% disapprove.

The relative stability of Obama’s ratings is evident even when party identification is taken into account. Currently, 78% of Democrats, 44% of independents and 14% of Republicans approve of Obama’s job performance. This is virtually identical to measures taken in June of last year, and little changed from a year ago. In January 2010, 84% of Democrats approved of Obama’s jobs performance, a figure which fell as low as 74% in March, during the debate over health care reform. But Democratic ratings of Obama rebounded after the passage of that legislation, and have remained stable since then.

Assessments of President Obama’s personal image have also changed little over the past year and remain, on balance, positive. Most Americans see Obama as a good communicator (75%), as warm and friendly (70%) and as well-informed (64%). Six-in-ten (60%) say he cares about people like them, while 58% say he is trustworthy. Those numbers largely mirror responses in June. Still, each has dropped by at least 15 points since Obama took office in early 2009. 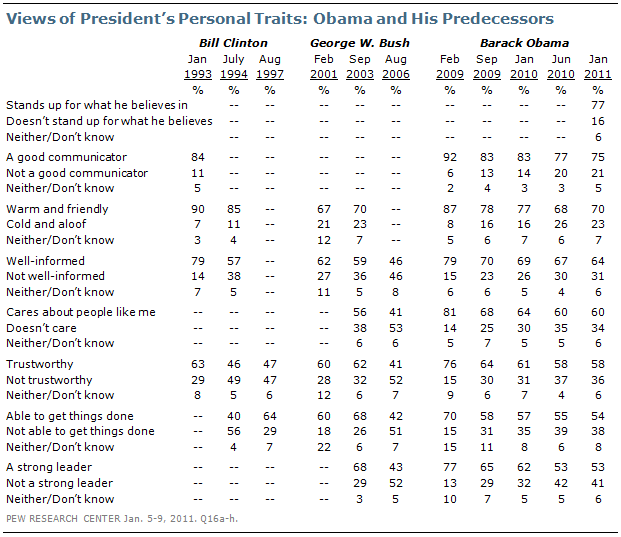 Democrats offer highly positive assessments of Obama on all the traits measured. Nearly nine-in-ten say he stands up for what he believes in (89%), is warm and friendly (88%), is a good communicator (87%) and that he cares about people like them (85%). Nearly eight-in-ten (79%) say he is a strong leader, while 74% say he is able to get things done. 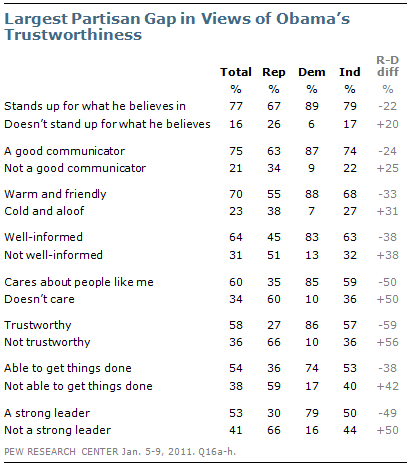 And, despite criticism of his agreement with congressional Republicans on end-of-year legislation that included an extension of Bush-era income tax cuts for the wealthy, liberal Democrats are just as likely as conservative and moderate Democrats to say that Obama stands up for what he believes in (88% vs. 90%).

Republicans also give Obama high ratings for standing up for his beliefs (67%) and his communication skills (63%), but are more critical of other traits. Just 30% see him as a strong leader, compared with 66% say he is not. And just more than a third say he cares about people like them (35%) or is able to get things done (36%).

The single largest partisan gap in impressions of Obama is over his trustworthiness. By an 86% to 10% margin, Democrats believe Obama is trustworthy. About a quarter (27%) of Republicans say he is trustworthy, while two-thirds (66%) say he is not.

On most of these questions, the gap between Democrats and Republicans is largely unchanged since June, with two exceptions where Republican impressions have improved slightly. The number of Republicans who describe Obama as a strong leader has increased slightly from 22% in June to 30% today. And more Republicans also say Obama is able to get things done (29% in June, 36% today).

Opinions among independents largely reflect the public as a whole and are little changed since June. Three-quarters (74%) see the president as a good communicator, 68% say he is warm and friendly, 63% say he is well informed and 57% say he is trustworthy. On the new question, nearly eight-in-ten (79%) say he stands up for what he believes in. Half of independents see him as a strong leader, while 44% do not. That is largely unchanged since June.

Obama and the Issues

As with Obama’s overall job approval, there has been little change in public evaluations of his performance on specific issues. More disapprove than approve when it comes to his handling of the economy, the deficit, and immigration policy. More approve than disapprove on the issues of energy and terrorism.

One issue on which Obama’s performance is rated significantly more positively today than a year ago is health care. In January 2010, just 38% of Americans approved of Obama’s handling of health care policy, while 52% disapproved. Today, opinion is divided about evenly, with 45% approving and 47% disapproving. Much of this improvement is the result of greater Democratic satisfaction; a year ago just 64% of Democrats approved of how Obama was handling health care policy; today 80% approve. By comparison, the share of independents who approve of Obama’s handling of health care is little changed over the past year (39% today, 34% in January 2010), and only 18% of Republicans approve, up from 10% a year ago. 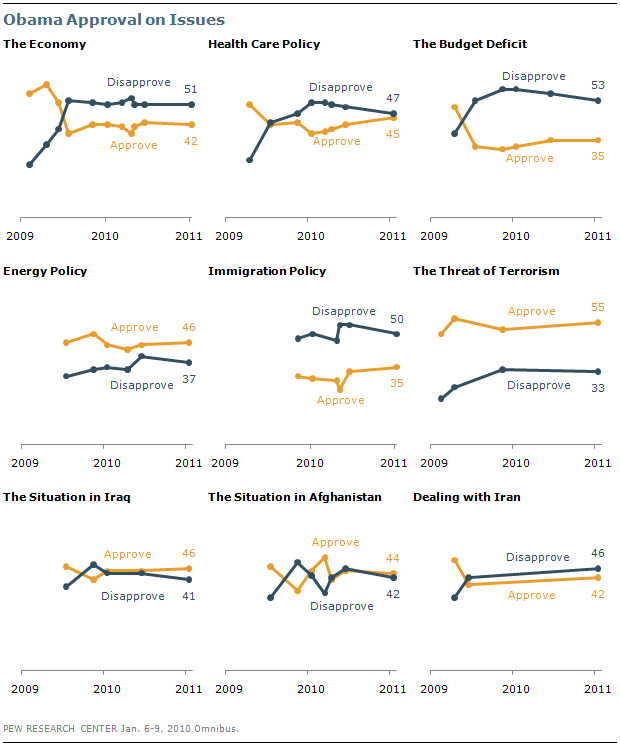 Will Obama Be a Successful President? 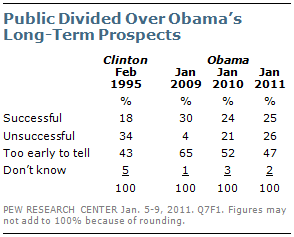 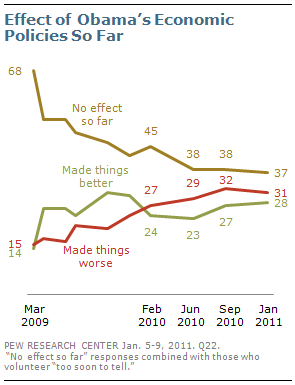 While the share of Americans who believe Obama’s policies have had an effect has grown, there is been little change in the balance of opinion over the past year. In February 2010, 24% said Obama’s policies had made economic conditions better, 27% said they had made things worse. Earlier, over much of 2009, slightly more felt his policies had helped than hurt.

There continue to be partisan differences in evaluations of the effect of Obama’s economic policies. Most Democrats say either that Obama&rsq
uo;s policies have made the economy better (46%) or have had no effect so far or it is too soon to tell (40%). Just 11% of Republicans say Obama’s policies have 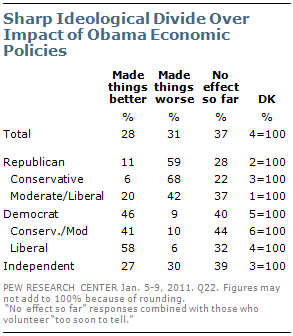 made things better and 28% say they have had no effect; a majority (59%) says Obama’s policies have made things worse. 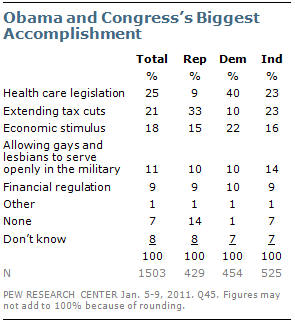 Among Republicans, 33% think extending the tax cuts was Obama and Congress’s biggest legislative accomplishment while 15% said the economic stimulus package and only 9% mentioned the health care legislation. When offered these choices, 14% of Republicans said none of these was a big accomplishment.

Next: Section 2: Views of the New Congress
← Prev Page
Page1You are reading page2Page3Page4
Next Page →