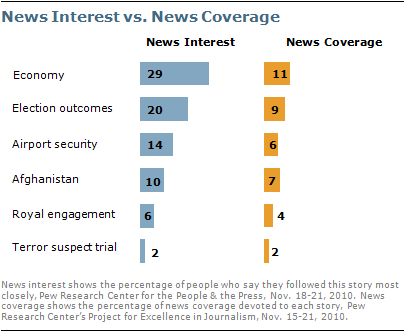 News about the economy topped the public’s news interest last week, though many Americans also closely tracked the fallout from the midterm elections and the debate over enhanced security measures at the nation’s airports.

The media divided coverage among top stories, including the economy (11% of coverage) and the election outcome (9%), according to a separate analysis by the Pew Research Center’s Project for Excellence in Journalism. News about airport security screening procedures made up 6% of the newshole measured by PEJ, while coverage of the situation in Afghanistan accounted for 7%. 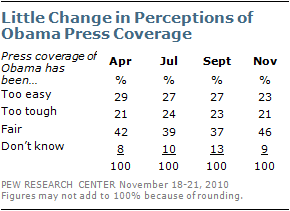 Currently, 46% say they think press coverage of President Obama has been fair, 23% say coverage has been too easy and 21% say it has been too tough.

In September, 37% said they thought coverage had been fair, 27% thought coverage was too easy and 23% said it was too tough. Responses to this question have fluctuated only modestly through 2010. 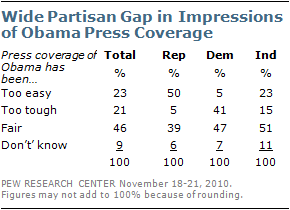 Most Aware of Stir over Energy Drinks with Alcohol 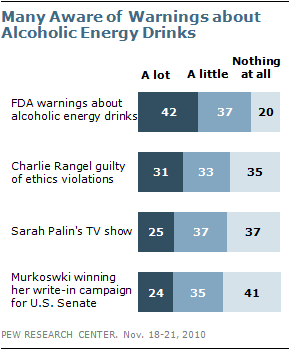 Several political figures in the news last week registered similar amounts of public awareness. More than six-in-ten (64%) heard either a lot (31%) or a little (33%) about the House Ethics Committee finding New York Congressman Charlie Rangel guilty of ethics violations. A similar majority (62%) heard at least a little about Sarah Palin’s new television show on TLC (25% heard a lot, 37% a little) and close to six-in-ten (59%) heard a lot (24%) or a little (35%) about Alaska Sen. Lisa Murkowski winning her write-in campaign for re-election to the U.S. Senate.

More Republicans (41%) than either Democrats (27%) or independents (30%) say they heard a lot about the ethics panel’s findings on the Rangel charges. The committee has recommended that the full House censure Rangel.

A third of the public (33%) says they followed the debate over new airport screening procedures very closely, while 14% say this was the news they followed most closely. News about airport security screening made up 6% of coverage.

More than a quarter (27%) say they very closely followed news about the situation in Afghanistan; 10% say this was the news they followed most closely. News about Afghanistan accounted for 7% of coverage.

News about the verdict in the trial of the first former Guantanamo detainee in a civilian court attracted less attention. About one-in-ten (12%) say they followed the outcome of the trial of Ahmed Khalfan Ghailani very closely, while 2% say this was the news they followed most closely. The trial accounted for 2% of coverage.

Nearly two-in-ten Republicans (19%) followed the terror trial very closely, compared with 9% of Democrats and 10% of independents.

These findings are based on the most recent installment of the weekly News Interest Index, an ongoing project of the Pew Research Center for the People & the Press. The index, building on the Center’s longstanding research into public attentiveness to major news stories, examines news interest as it relates to the news media’s coverage. The weekly survey is conducted in conjunction with The Project for Excellence in Journalism’s News Coverage Index, which monitors the news reported by major newspaper, television, radio and online news outlets on an ongoing basis. In the most recent week, data relating to news coverage were collected November 15-21, and survey data measuring public interest in the top news stories of the week were collected November 18-21, from a nationally representative sample of 1,004 adults.

Results for this survey are based on telephone interviews conducted under the direction of Princeton Survey Research Associates International among a national sample of 1,004 adults living in the continental United States, 18 years of age or older, from November 18-21, 2010 (670 respondents were interviewed on a landline telephone, and 334 were interviewed on a cell phone, including 151 who had no landline telephone). Both the landline and cell phone samples were provided by Survey Sampling International. Interviews were conducted in English.