The public sees the big picture when it comes to the changing balance of power in Washington. Fully 75% say that the Republican Party is generally regarded as doing best in this month’s midterm elections. 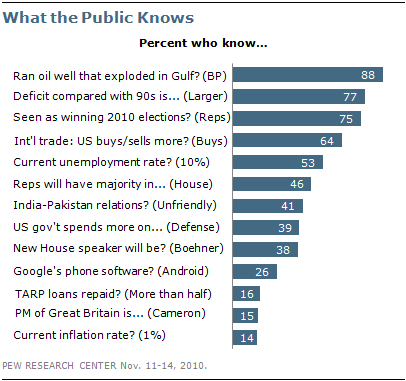 Far fewer know the specifics about the GOP’s victories. Fewer than half (46%) know that the Republicans will have a majority only in the House of Representatives when the new Congress convenes in January, while 38% can identify John Boehner as the incoming House Speaker.

The Pew Research Center’s latest News IQ Quiz, conducted Nov. 11-14 among 1,001 adults, finds a similar pattern in the public’s knowledge about economics. The quiz is composed of 13 multiple-choice questions about current events.

Nearly eight-in-ten (77%) say correctly that the federal budget deficit is larger than it was in the 1990s and 64% know that in recent years the United States has bought more foreign goods than it has sold overseas. As in recent knowledge surveys, about half (53%) estimate the current unemployment rate at about 10%.

But the public continues to struggle with questions about the bank bailout program known as the TARP: Just 16% say, correctly, that more than half of loans made to banks under the TARP have been paid back; an identical percentage says that none has been paid back. In Pew’s previous knowledge survey in July, just 34% knew that the TARP was enacted under the Bush administration. (See “Well Known: Twitter; Little Known: John Roberts,” July 15, 2010.)

The new survey finds that an overwhelming percentage (88%) identify BP as the company that operated the oil well that exploded in the Gulf of Mexico earlier this year. But as in the past, the public shows little awareness of international developments: 41% say that relations between India and Pakistan are generally considered to be unfriendly; 12% say relations between the two long-time rivals are friendly, 20% say they are neutral and 27% do not know.

Just 15% know that David Cameron is the prime minister of Great Britain; about as many say it is Tony Hayward, the former chief executive of BP. The proportion correctly identifying Cameron as the British prime minister is about the same now as it was in July (19%).

On a different subject, 26% of Americans know that Android is the name of the Google operating system for smartphones. As in past news quiz questions about technology, there is a sizable age gap in awareness of Android. Far more people under age 50 (37%) than those ages 50 and older (11%) correctly identify Android as the Google phone’s operating system. 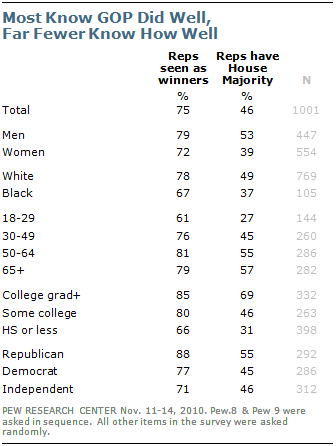 While 75% identify the Republicans as the party regarded as doing best in the midterms, fewer than half (46%) know that Republicans will have a majority only in the House when the new Congress convenes in January. About one-in-seven (14%) say the GOP won both the House and Senate; 8% say they won just the Senate; 5% do not think they will have a majority in either chamber; and 27% do not know.

There is broad awareness among most political and demographic groups that the Republicans did best in the midterms. But just 27% of those younger than 30 know that Republicans captured just the House; 19% say that they won both the House and Senate while 42% do not know. By contrast, 45% of those 30 to 49, and majorities of those 50 to 64 (55%) and 65 and older (57%), answered this question correctly.

Most Know Deficit Has Grown 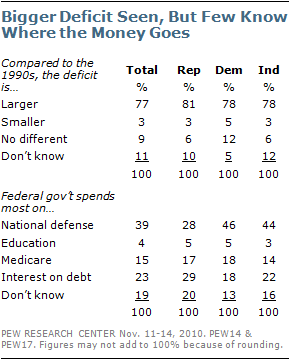 On the subject of government spending, many Americans (77%) are aware that the U.S. has a larger budget deficit today than in the 1990s, yet far fewer correctly answer a question about what the government spends more on: national defense, education, Medicare or interest on the national debt. Roughly equal proportions of Republicans (81%), Democrats (78%) and independents (78%) know that the federal budget deficit is larger now than in the 1990s. 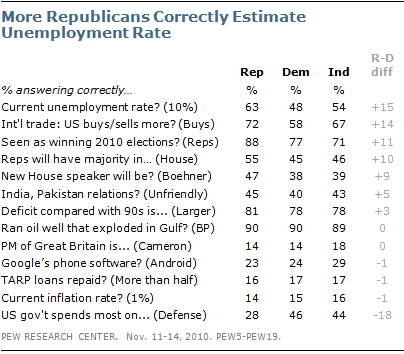 About six-in-ten Republicans (63%) correctly estimated the unemployment rate at about 10%, compared with 48% of Democrats. There also is a wide partisan gap in awareness of the U.S. trade deficit: 72% of Republicans and 58% of Democrats say that the U.S. buys more good from abroad that it sells.

Republicans also are more likely to know than the GOP was perceived as winning the midterms and to know that the Republicans won a majority in the House. And while only about half of Republicans (47%) could identify John Boehner as the next House Speaker, slightly fewer Democrats (38%) know this.

Republicans and Democrats each are largely unaware of how much of the TARP loans have been repaid and relatively few in both parties estimated the inflation rate at about 1%. As noted, more Democrats than Republicans know that the government spends more on national defense than on interest on the national debt, Medicare or education. 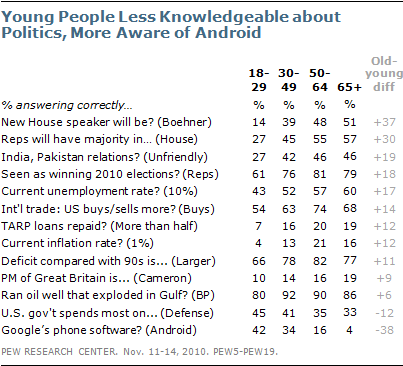 As in previous knowledge quizzes, young people struggle with many questions about politics, economics and foreign affairs.

Just 14% of those younger than 30 know that John Boehner will be the next House speaker; about as many (19%) say it will be Nancy Pelosi, the current speaker. Among older age groups, Boehner is far better known.

Just 27% of those under 30 say Republicans will have a majority in the House, while the same percentage (27%) says that India-Pakistan relations are generally regarded as unfriendly. On each question, at least four-in-ten among older age groups answered correctly.

An alternative way of comparing quiz performance across groups is to look at the average results. Twelve of the 13 itemson the test form a knowledge scale for this installment of the Pew News IQ quiz. Each question is worth one point on the scale ranging from zero (none right) to 12 (a perfect score).

This was a difficult quiz. Americans answered an average of five out of twelve questions correctly. That means the public averaged fewer than half right answers (42%). Illustrating the difficulty of some questions, less than one percent of the public answered twelve correctly while 4% missed them all.

As described above, older Americans did significantly better than young people. Quiz takers 65 and older correctly answered 5.3 questions on average while those under 30 averaged four right answers. Republicans did somewhat better than Democrats on average.