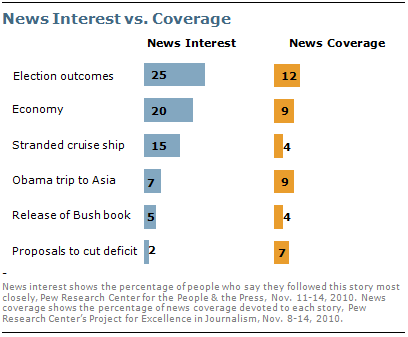 The public continued to focus most closely on the outcome of the midterm elections last week as news coverage highlighted their impact on the balance of power and the agenda in Washington. 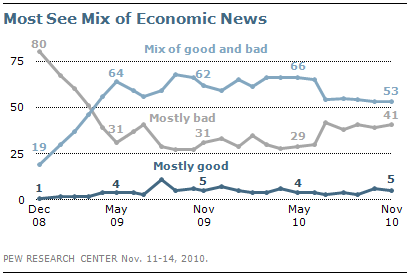 while just 5% say they are hearing mostly good news.

Those numbers have changed little since July, when perceptions of economic news took a turn for the worse. A month before that, nearly two-thirds (65%) said economic news was mix of good and bad and 30% said it was mostly bad.

There continue to be wide partisan differences in views of economic news. About two-thirds of Democrats (66%) describe economic news as a mix of good and bad, compared with 49% of independents and 45% of Republicans. More than half of Republicans (53%) say the news about the econo 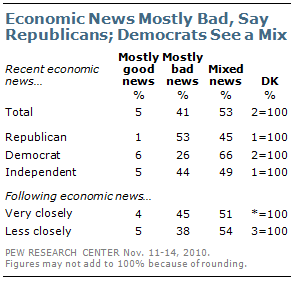 my has been mostly bad, as do 44% of independents and just 26% of Democrats.

While the public tracked news about the midterm elections and the economy most closely last week, there was no dominant story for the media: 12% of coverage was devoted to the election outcomes, while 9% was focused on the economy and an identical percentage on President Obama’s trip to Asia, according to a separate analysis by the Pew Research Center’s Project for Excellence in Journalism (PEJ).

A week earlier, which included Election Day, Nov. 2, 57% of coverage was devoted to the elections, making it one of the biggest stories since the presidential elections two years earlier.

News about the Carnival Cruise ship stranded off the coast of Mexico without power for several days accounted for 4% of the newshole, but 15% of the public say this was the news they followed most closely last week. Women were more likely to follow this story very closely than men (18% vs. 12%). More than one-in-five (22%) of those 50 and older say they followed this news very closely, compared with 10% of those 18 to 49.

Another 15% say they followed news about proposals to reduce the federal deficit unveiled by the leaders of a presidential panel; 2% say this was the news they followed most closely. News about the proposals accounted for 7% of coverage. There were no significant differences among partisans in the numbers tracking this news very closely.

Cigarette Labels and Mysterious Trails in the Sky 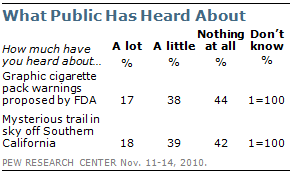 Most Americans say they heard at least a little last week about the graphic warning labels for cigarette packages proposed by the Food and Drug Administration as another means to discourage smoking. Close to two-in-ten (17%) say they heard a lot about this and 38% heard a little; 44% say they heard nothing at all.

Similar numbers heard at least a little about the video taken off the coast of Southern California of what some thought showed a mysterious missile trail in the sky (18% a lot, 39% a little). More than four-in-ten (42%) say they heard nothing at all about the video, which experts now say likely showed the condensation trail from an aircraft.

These findings are based on the most recent installment of the weekly News Interest Index, an ongoing project of the Pew Research Center for the People & the Press. The index, building on the Center’s longstanding research into public attentiveness to major news stories, examines news interest as it relates to the news media’s coverage. The weekly survey is conducted in conjunction with The Project for Excellence in Journalism’s News Coverage Index, which monitors the news reported by major newspaper, television, radio and online news outlets on an ongoing basis. In the most recent week, data relating to news coverage were collected November 8-14, and survey data measuring public interest in the top news stories of the week were collected November 11-14, from a nationally representative sample of 1,001 adults.

Results for this survey are based on telephone interviews conducted under the direction of Princeton Survey Research Associates International among a national sample of 1,001 adults living in the continental United States, 18 years of age or older, from November 11-14, 2010 (670 respondents were interviewed on a landline telephone, and 331 were interviewed on a cell phone, including 136 who had no landline telephone). Both the landline and cell phone samples were provided by Survey Sampling International. Interviews were conducted in English.