Many Americans continue to say their religious beliefs have been highly influential in shaping their views about social issues, including abortion and same-sex marriage. But far fewer cite religion as a top influence on their opinions about several other social and political issues, including how the government should deal with immigration, the environment and poverty. 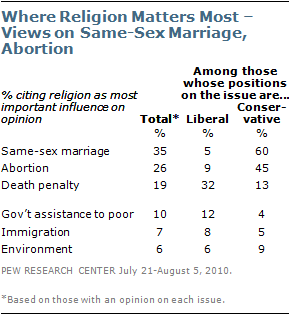 Despite the fact that many religious leaders have been outspoken advocates for immigration reform, just 7% of adults who take a position on immigration say that religion is the most important influence on their views on this issue. About one-in-four churchgoers (24%) say the clergy at their places of worship have spoken out about immigration, nearly the same as in 2006. About half of those who hear about immigration in church say their clergy are favorable to immigrants and immigration, but nearly one-quarter are hearing anti-immigration messages.

In contrast with the issue of immigration, 35% say religion is the top influence on their thinking about same-sex marriage, including fully 60% among those who oppose allowing gays and lesbians to marry legally. More than four-in-ten (44%) hear clergy speak out about homosexuality in church, with the overwhelming majority hearing negative messages about homosexuality. On the issue of abortion, 26% overall say religion is the most important influence on their opinion, including 45% among abortion opponents.

The vast majority of regular churchgoers (88%) say they hear about the issue of hunger and poverty from their clergy, but just 10% cite religion as the top influence on their opinions about government’s role in providing assistance to the poor. Nearly half (47%) say their clergy speak out on the environment, almost always to encourage environmental protection. But just 6% say their own views on the environment are shaped primarily by their religious beliefs.

These are among the key findings of a survey exploring religion’s connection with opinions about current social and political issues. The survey was conducted July 21-Aug. 5 by the Pew Research Center for the People & the Press and the Pew Forum on Religion & Public Life. It interviewed 3,003 respondents reached on landlines and cell phones in both English and Spanish.

For most voters, the economy and jobs outpace all other issues in the election this fall, and religious voters are no exception. As previously reported (see “Republicans Faring Better with Men, Whites, Independents and Seniors,” Aug. 10, 2010), nine-in-ten voters (90%) rate the economy as very important, and 88% do so for jobs; the numbers are nearly identical among all major religious groups, including people who are unaffiliated with a religion. Health care also rates near the top, with 78% saying it will be very important. Terrorism, the budget deficit and taxes are also seen as important, especially by white evangelicals and black Protestants. 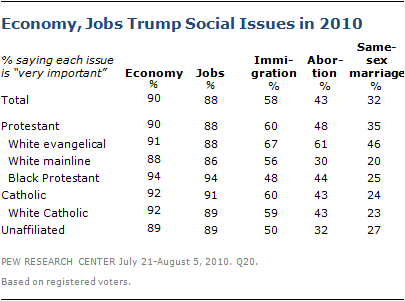 In contrast, hot-button social and cultural issues fall at or near the bottom of the list, even for relatively conservative religious groups such as white evangelical Protestants. Though both issues are among the least important for evangelicals, abortion (61% very important) and same-sex marriage (46%) are more important to evangelicals than to other religious groups. About four-in-ten voters (43%) overall rate abortion as very important and about one-third (32%) say this about same-sex marriage.

White evangelicals also stand out for the relatively high importance they place on immigration: 67% say immigration is a very important issue, compared with 60% among Catholics, 56% among white mainline Protestants, 50% among the unaffiliated and 48% among black Protestants.

A plurality of Americans (42%) favor immigration policy that gives equal priority both to better border security and stronger enforcement of immigration laws as well as to creating a way for illegal immigrants to become citizens (a so-called path to citizenship). One-third (33%) believe the priority should be on better border security and greater enforce-ment, while slightly more than one-in-five (22%) consider offering a path to citizenship the top priority. 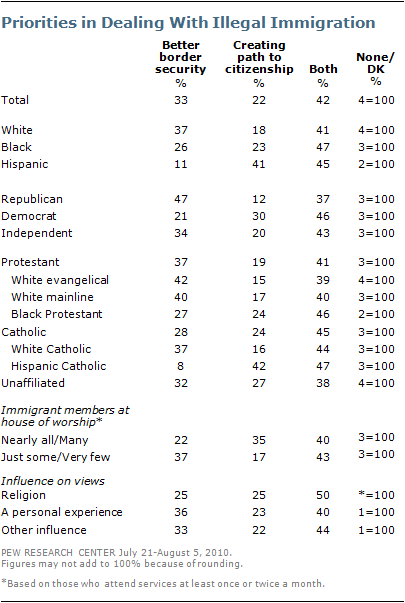 Support for placing a priority on strict enforcement of current immigration laws is higher among whites (37%) than blacks (26%) and stands at roughly one-in-ten (11%) among Hispanics. A similar divide is seen among religious groups: Relatively few Hispanic Catholics would make better border security the top priority (8%). Support for doing so is much higher among white Catholics (37%), evangelicals (42%) and mainline Protestants (40%). 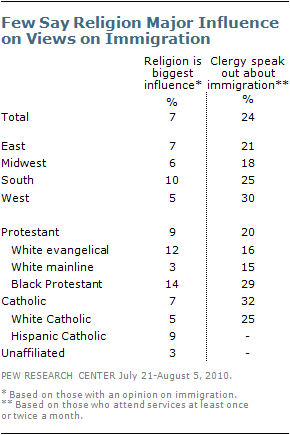 Few Americans (7%) consider religion the most important influence on their opinions about immigration policy. Larger numbers cite a personal experience (27%), their education (20%) or something they have seen or read in the media (21%). Those who cite religion as the most important influence are somewhat less likely than other respondents to place priority on enhanced immigration enforcement.

The public is more evenly divided on immigrants’ contribution to the economy: 42% believe that immigrants strengthen the country with their hard work and talents, while 45% believe they are a burden because they take jobs, housing and health care.

Democrats, younger Americans, Hispanic Catholics and the religiously unaffiliated are more likely than other groups to express positive views of immigrants on both of these questions; white evangelicals are among those expressing the least favorable views of immigrants, with 27% saying immigrants strengthen the country with their hard work and talents and 36% saying they strengthen society rather than threaten traditional customs and values.

Roughly half of those whose clergy speak out about immigration say immigrants strengthen the country with their hard work and talents, compared with 38% among regular worship attenders whose clergy do not speak about immigration. There is very little difference between these two groups on the question of immigrants’ impact on American customs and values. Those who report that many or most members of their congregation are immigrants are far more favorable toward immigrants than those whose house of worship is comprised of fewer immigrants. 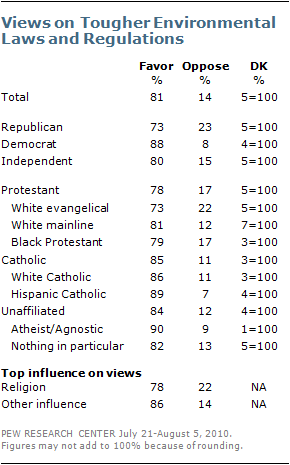 While an overwhelming majority favors tougher environmental protections, the subject of the environment is only a mid-tier issue for voters in the fall Congressional elections. Roughly six-in-ten voters (57%) cite the environment as very important, far behind the economy (90% cite it as very important) or jobs (88%), but higher than social issues such as abortion (43%) or same-sex marriage (32%).

For many policy issues, political or religious affiliations reveal sizeable gaps in support, but on the general question of stronger environmental protection these differences are relatively modest. Fewer Republicans favor tougher environmental laws and regulations than either Democrats (88%) or independents (80%), but even among Republicans, 73% support stronger safeguards for the environment.

There is only a modest religious element in attitudes about environmental protection. Solid majorities of all major religious traditions favor stronger laws and regulation, including 73% of white evangelical Protestants, 79% of black Protestants, 85% of Catholics and 84% of the unaffiliated. 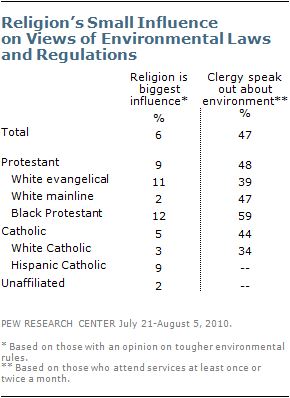 While few describe religion’s influence as most important in shaping their thinking on environmental protection, some variation exists among religious groups. White evangelical Protestants, black Protestants and Hispanic Catholics are more likely than white mainline Protestants and white Catholics to cite religion’s influence as most important to their views on the environment.

Those hearing about the environment in church report hearing a variety of mostly pro-environment messages. Roughly three-in-ten (29%) are encouraged to “protect it” or “clean it up,” while 11% say their clergy encourage conservation. One-in-five (20%) report warnings and discussion about environmental damage, including the recent oil spill in the Gulf of Mexico (6%). For 10% of those who hear about the environment, the messages include explicit religious language and themes promoting stewardship of the earth or care for God’s creation. 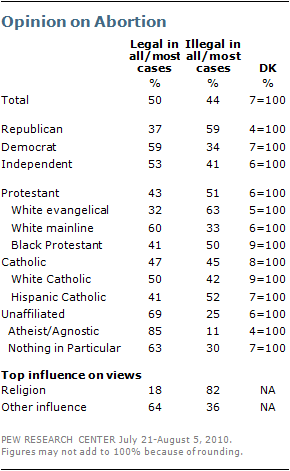 In contrast with many other social and political issues, religion is clearly an important influence on public opinion about same-sex marriage and abortion. Significant numbers of Americans report that religion is the most important factor in their thinking about these topics, and sizeable numbers of churchgoers hear about them from their clergy. 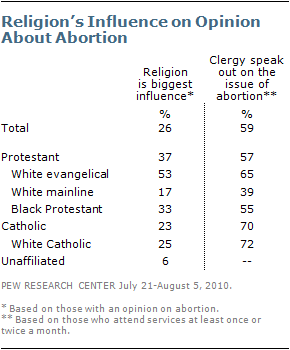 Fully 45% of those who say abortion should be illegal in all or most cases cite religious beliefs as the top influence on their views, compared with just 9% of those who say abortion should be legal. Among religious groups, just over half of white evangelical Protestants (53%) say religion has the biggest influence on their views of abortion, while a third of black Protestants (33%), roughly a quarter of Catholics (23%) and 17% of white mainline Protestants say the same. 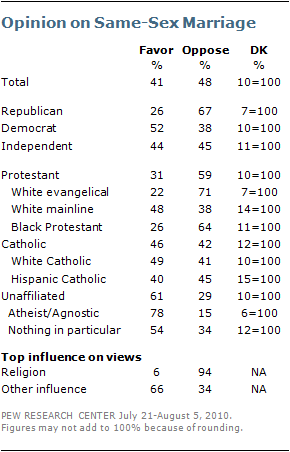 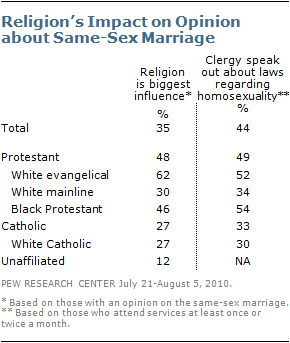 More than a third of those who hold an opinion on same-sex marriage say that their religious beliefs are the biggest influence on their views (35%); roughly half as many say a personal experience plays the greatest role in their views (17%) and about one-in-ten cite their education (13%) or views of friends and family (10%).

Support for same-sex marriage is closely tied to what respondents report as the most important influence on their views. Among those who say religious beliefs are the most important influence on their opinion on same-sex marriage, a scant 6% favor allowing gays and lesbians to marry, but among those who cite some other influence (including education, views of friends and family, or a personal experience), two-thirds (66%) are in favor.

Religion is more commonly cited as the top influence on opinion by people in certain religious groups, including 62% of white evangelical Protestants and 46% of black Protestants. Fewer white mainline Protestants (30%) and white Catholics (27%) name religion as a key factor. 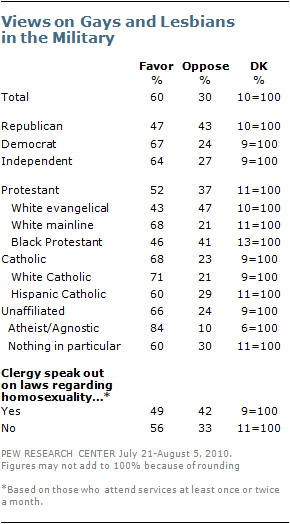 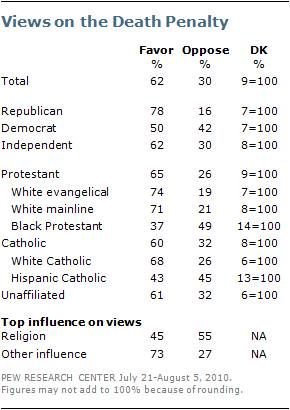 Americans continue to express support for the death penalty for persons convicted of murder. Currently 62% favor the death penalty, while 30% oppose it. This is nearly identical to the level of support in 2007 but somewhat lower than earlier in the 2000s and especially the 1990s. In 1996, 78% favored the death penalty and just 18% were opposed.

There are relatively modest differences in support across religious groups, with majorities of white evangelicals (74%), white mainline Protestants (71%) and white Catholics (68%) favoring capital punishment. But less than half of black Protestants (37%) and Hispanic Catholics (43%) favor the death penalty. 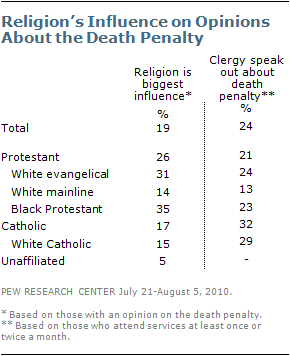 Government Assistance to the Poor 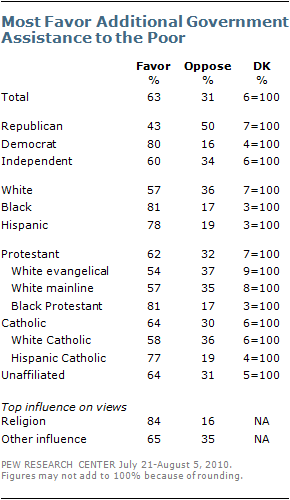 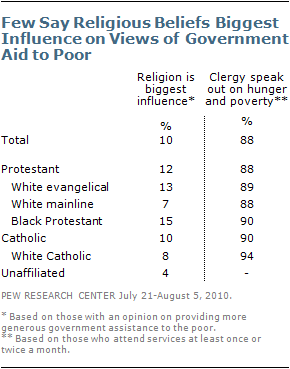 Clergy Discussion of Iraq and Afghanistan, Candidates and Elections 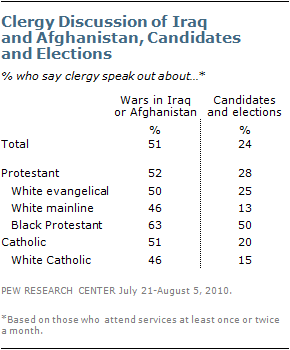 Roughly half of regular worship attenders (51%) say the clergy at their congregation speaks out about the wars in Iraq or Afghanistan. Nearly two-thirds of black Protestants (63%) have heard their clergy discuss Iraq or Afghanistan, compared with 50% of white evangelical Protestants and 46% among both white mainline Protestants and white Catholics. Roughly one-quarter of religious service attenders (24%) say their clergy speak out about candidates and elections. Fully half of black Protestants say clergy at their congregation discuss candidates and elections, much higher than the one-quarter (25%) of white evangelical Protestants, 15% of white Catholics and 13% of white mainline Protestants who say the same.

Few Say Religion Shapes Immigration, Environment Views
OverviewImmigrationEnvironmentHomosexuality and AbortionDeath PenaltyGovernment Assistance to the PoorClergy Discussion of Iraq and Afghanistan, Candidates and Elections
About the Survey