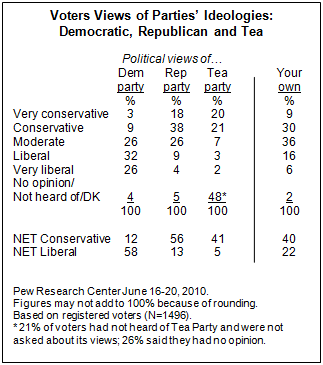 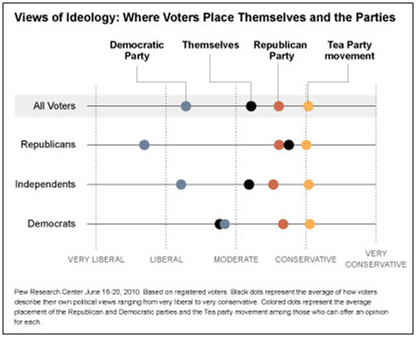 The national survey by the Pew Research Center for the People & the Press, conducted June 16-20 among 1,802 adults (1,496 registered voters) reached on cell phones and landlines, finds that the Tea Party movement is viewed as conservative, though not extremely conservative. One-in-five voters (20%) say the Tea Party is very conservative while about as many (21%) see it as conservative. Nearly half of voters (48%) had no opinion of the Tea Party’s ideology or had never heard of the movement. 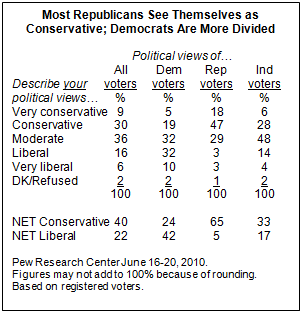 The survey makes it possible to compare voters’ own views with their assessments of the parties’ ideologies. About half of all voters (53%) view the Democratic Party’s ideology as more liberal than their own. A smaller percentage (41%) says the Republican Party’ ideology is more conservative than their own ideology. 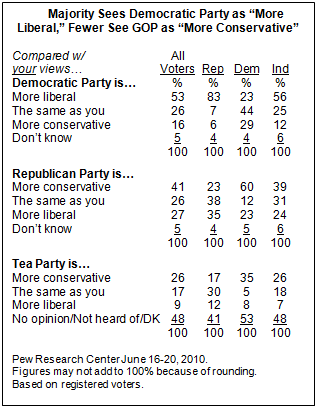 Among Democratic voters, 44% say their party’s ideology is the same as their own, while 29% see the Democratic Party as more conservative than they are; 23% see the party as more liberal.

Nearly half of all voters (48%) either never have heard of the Tea Party or express no opinion of its ideology. Among voters expressing an opinion, 26% say it is more conservative than they are, 17% say its views are the same as theirs and 9% see it as more liberal. Three-in-ten Republican voters place the Tea Party at the same point as themselves ideologically; 17% say it is more conservative while nearly as many (12%) see the Tea Party’s views as more liberal than their own.