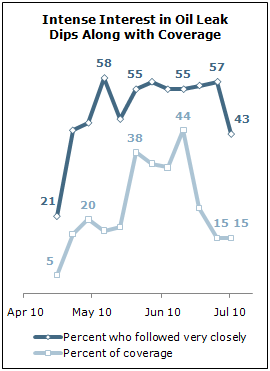 As the public continues to closely track news about the environmental disaster unfolding in the Gulf of Mexico, few Americans say news organization are giving the oil leak too much coverage.

The Gulf oil leak once again topped both public interest and media coverage last week, though the percent following the story very closely dropped to 43% from 57% the week of July 1-5. Still, 45% say they followed this news more closely than any other major story. Just 13% say they followed the next ranking story – the U.S. government’s legal challenge to Arizona’s new immigration law – most closely, according to the latest weekly News Interest Index conducted July 8-11 among 1,001 adults by the Pew Research Center for the People & the Press.

News about the oil spill accounted for 15% of coverage, more than double the next top story but far below the 44% devoted to the leak the week of June 14, according to a separate analysis by the Pew Research Center’s Project for Excellence in Journalism (PEJ). The percentage of coverage devoted to the spill declined in subsequent weeks as the media also focused on other major stories – such as the economy and the war in Afghanistan. 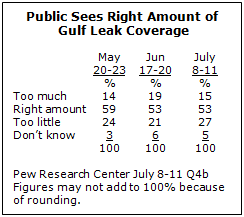 A majority (53%) now says that news organizations are giving the right amount of coverage to the oil leak, matching the number that said this last month. Just 15% say the story is getting too much coverage, while about a quarter (27%) say it is getting too little. Those numbers are little changed from May or June.

The public takes a more critical view of the amount of coverage devoted to two other stories last week. Seven-in-ten (71%) say the sentencing of actress Lindsay Lohan to jail time for probation violations received too much coverage; 61% say the same about coverage of NBA-star LeBron James’ televised announcement that he would join the Miami Heat next season. 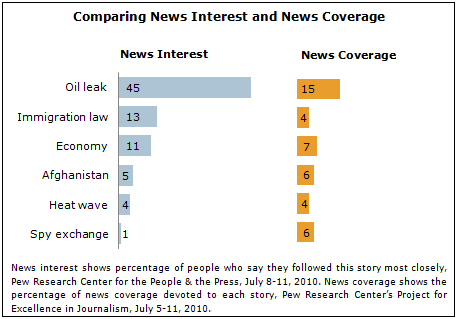 Despite the decline in the percentage saying they followed oil leak news very closely, no other story comes close when people are asked which story they followed most closely. That has been the case each week since the start of May, shortly after the April 20 oil rig-explosion that sent oil spewing into the Gulf from an underwater well.

About a quarter (23%) say they followed news about the situation in Afghanistan very closely. That’s down slightly from the 29% that said they were following Afghanistan developments very closely one week earlier – shortly after the ouster of Gen. Stanley McChrystal as commander of U.S. forces there. Just 5% say this was the news they followed most closely last week. News about Afghanistan accounted for 6% of coverage. 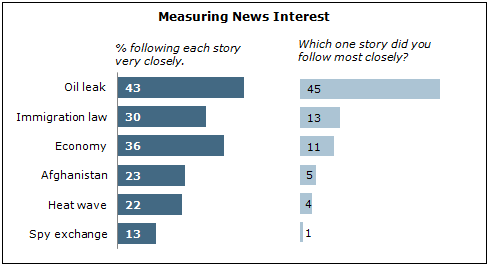 Just 13% say they very closely followed news about the exchange of suspected spies between the United States and Russia; 1% say this was the story they followed most closely. The spy story accounted for 6% of coverage.

Visits to the U.S. by Israeli Prime Minister Benjamin Netanyahu and England’s Queen Elizabeth were less widely known. Just 13% say they heard a lot about Netanyahu’s trip, which included a meeting with President Obama in Washington. About a third (35%) heard a little about the visit, but 52% say they heard nothing at all.

Too Much Coverage for Lindsay and LeBron

Large majorities say news organizations gave too much coverage last week to Lohan’s legal woes (71%) and James’ announcement (61%), but majorities say the press gave the right amount of coverage to the heat wave that hit eastern and southern states (58%) and to the continuing oil leak in the Gulf of Mexico (53%). 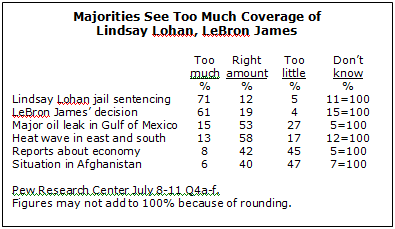 These findings are based on the most recent installment of the weekly News Interest Index, an ongoing project of the Pew Research Center for the People & the Press. The index, building on the Center’s longstanding research into public attentiveness to major news stories, examines news interest as it relates to the news media’s coverage. The weekly survey is conducted in conjunction with The Project for Excellence in Journalism’s News Coverage Index, which monitors the news reported by major newspaper, television, radio and online news outlets on an ongoing basis. In the most recent week, data relating to news coverage were collected July 5-11, and survey data measuring public interest in the top news stories of the week were collected July 8-11, from a nationally representative sample of 1,001 adults.

Results for this survey are based on telephone interviews conducted under the direction of Princeton Survey Research Associates International among a national sample of 1,001 adults living in the continental United States, 18 years of age or older, from July 8-11, 2010 (670 respondents were interviewed on a landline telephone, and 331 were interviewed on a cell phone, including 123 who had no landline telephone). Both the landline and cell phone samples were provided by Survey Sampling International. Interviews were conducted in English.