Most global opinion leaders say people in their countries hold favorable views of the United States, in spite of their negative perceptions of U.S. power. This is particularly true in Western Europe, where 81% of influentials say publics have a very or mostly favorable impression of the United States. Only in the Islamic world are elites divided – 48% of leaders there report mostly favorable views, while 49% say the U.S. is viewed unfavorably.

Elites perceive that there is a comparably high level of support for Washington in its current struggle with Osama bin Laden and the al Qaeda network. Influentials say most or many people in their countries side with the United States in this conflict. Again, this is less the case in Islamic countries, where opinion leaders are divided over how many people support the position of the U.S. But even in Islamic countries, including those in the Middle East/conflict area, only a small minority of opinion leaders see popular support for bin Laden and his followers.

Positive feelings toward the United States are strongly attributable to what America stands for, not what America does in the world, say opinion leaders. Most of all, they reflect the widespread view across regions that the United States is the land of opportunity. An overwhelming majority of those questioned – two-thirds of opinion leaders in Latin America and roughly three-quarters in Asia, Europe and the Middle East/conflict area – think that is why people in their countries like America.

U.S. leadership in scientific and technological innovation is another major image booster for the United States, with two-thirds of those surveyed citing such leadership as an asset abroad. They also say pro-U.S. sentiment is a product of people's strong appreciation for America's democratic ideals. And, despite the criticism of American materialism by many intellectuals around the world, a slight majority of leaders both in the United States and abroad attribute the high regard for the United States to the popularity of American consumer goods.

The U.S. is viewed unfavorably by many for its general power and influence. Particularly in many European countries, including Russia, opinion leaders perceive a good deal of resentment of the United States' power in the world among citizens of their countries, as well as unhappiness with the dominance of U.S. culture, U.S. corporations, and the belief that U.S. policies may have contributed to the growing gap between rich and poor nations.

Distinct from these concerns are another set of criticisms about how the United States has handled regional affairs in the Middle East. The impression that U.S. policies and actions in the world were a major cause of the terrorist attacks is strongly related to the perception that the United States is overreacting in its response, and a general dislike of U.S. support for Israel. 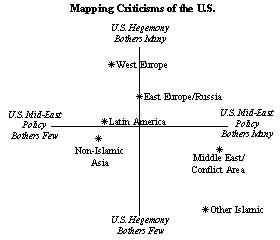 Not surprisingly, public dissatisfaction with America's Middle East policy is perceived to be highest in largely Islamic countries. In particular, citizens of those countries closest to the current conflicts – Pakistan, Egypt, Uzbekistan and Turkey – have a strongly unfavorable view of U.S. policy toward Israel, and the U.S. response to the terrorist attacks.

However, these same Islamic states express less concern over American power in general than do citizens of other parts of the world. U.S. business and cultural hegemony is, at best, a minor consideration, and fewer resent U.S. power and economic policies than in other regions. This is especially true in Islamic countries that are not close to the current conflicts. Leaders in Indonesia, Bangladesh and Nigeria see very little public concern in their countries over American cultural, economic, and political influence.

Western European publics, by contrast, are seen as having the greatest distaste for American power in general, while opposition to American policy in the Middle East is not thought to be widespread in these countries. Opinion leaders in Eastern Europe see similar attitudes among citizens of their countries, though Russians, in particular, are perceived as being unhappy with both American hegemony in general as well as the handling of Middle Eastern affairs.

Opinion leaders from every region say large numbers of people in their country think U.S. policies were a major cause of the Sept. 11 attacks. Even in Western Europe, 36% of opinion leaders say most or many people in their country believe U.S. policies were to blame; that figure rises to 71% in Eastern Europe/Russia and 81% in the Middle East/conflict area.

Even more widespread among ordinary people, according to elites, is the view that it is good that Americans know what it is like to be vulnerable. Seven-in-ten opinion leaders say at least many people in their countries think this – ranging from a low of 65% in the Middle East/conflict area to a high of 76% in Asia.

But even though sizable numbers think that the United States is overreacting, the influentials also say that publics around the world support the objective of rooting out terrorism. A solid majority (62%) of the business, economic and cultural influentials overseas say that at least many people in their countries think that the United States is doing the right thing by fighting terrorism. Popular support for the struggle against terrorism is seen as highest in Western Europe (90% most/many support) and lowest in the Middle East/conflict area (41%).

Most opinion leaders do not accept doomsayers' predictions that Sept. 11 and subsequent developments have slowed the pace of globalization. Only in Asia, which is more dependent on exports than any other region, does a majority of leaders express such concerns and, even there, just 22% say globalization has slowed down a lot. At the other end of the spectrum, better than seven-in-ten influentials in Western Europe say globalization has barely slowed, if at all.